Farewell to "Orange Is the New Black," a Series that Redefined Diversity on TV 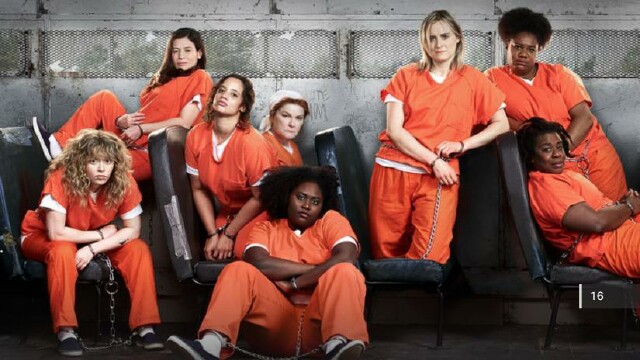 Needless to say, Netflix’s  Orange Is the New Black -- the only series in TV history to win Emmys in both the Best Comedy Series and Best Drama Series categories -- will always be remembered as a phenomenon -- a series that went there long before most others in terms of gender and racial identity and inclusion.  Since it’s 2013 debut it has been honored with 47 major awards and been nominated for over 120 others.  More importantly, though, it has been a champion of women’s rights, LGBTQ+ rights, and prison reform, all while giving us some of the best storytelling and most iconic celebrities that we’ve come to know over the past decade.  Now, in its seventh and final season, Orange has the daunting task of tying up all its loose ends and shaping a satisfying ending.  Given what I’ve seen so far (which is all of it), not only do series creator Jenji Kohan and the gang pull that off, they do so while tackling some seriously heavy issues with a level of grace the likes of which very few television series have been capable of achieving.  Ever.

There was never any shortage as far as plotlines go in this series, so I’ll avoid a hyper-detailed recap.  Long story short, at the end of season six Piper (Taylor Schilling) got out, Taystee (Danielle Brooks) got life, and Daya (Dascha Polanco) -- a lifer since last season -- is still running around max with partner Daddy (Vicci Martinez).  Cue season seven.

The interesting thing about this final season is its connection to its predecessors.  If one truly pays attention, the groundwork for some of the series’ biggest moments have been right under our noses all along.  For example, Poussey’s (Samira Wiley) death in the penultimate episode of season four was a moment that marked the beginning of an irreversible wave of change throughout the OITNB universe. That tragic incident, in which CO Bayley (Alan Aisenberg) pinned her to the ground with enough force to stop her breathing, unintentionally ending her life, became the catalyst for the five-day season five riot/hostage situation, and all the fallout to follow.  In season two, episode four (aptly named “Toast Can’t Never Be Bread Again”), Poussey and Taystee are chillin’ in their bunk when Taystee tickles Poussey so much that she playfully exclaims, “I ain’t ticklish! No! No! Uncle! Uncle! I can’t breathe!”  It’s a quick and frankly unnoticeable line that would be inconsequential if not for Poussey’s eventual death.  This is especially disturbing when considering some of her last words were also, “I can’t breathe” -- an obvious sign that none of this narrative was by accident.

There are connections like that present throughout the final season, which won’t be spoiled here, but they’re not the only thing Orange has going for it.  This show has always been a proponent of the disenfranchised, using the environment provided by its narrative and the characters that fill it as vehicles to organically raise and comment on relevant topics, and season seven is no different.  Besides its continued work condemning the exploitation and corruption-riddled prison industrial complex, it’s now taking a stand against the equally sinister organization, ICE.  Turns out being detained in an Immigration and Customs Enforcement facility is a lot like being in prison, and if you think it’s difficult for an inmate to get justice when their rights get violated, imagine being undocumented and trying to do the same.  This aspect of the season hits particularly close to home, not only because I’m Latino, or because I have family members who are immigrants, but because the detainees depicted are real people.   Seeing stories on the news about the concentration camp-like environments and the numerous injustices happening to undocumented residents of this country may be one thing, but seeing them brought to life, to see that pain given a face … that’s a different thing entirely.  I’d argue that the final season of Orange Is the New Black is as necessary a watch as Netflix’s When They See Us.  Seriously.

On an emotional level, OITNB has the same perfect blend of comedy and raw emotion that it’s always had.  Sure, it’s not exactly known for having episodes end on a happy note, but it’s ability to get the viewer invested in the lives of its characters is unparalleled.  As a comedy fan, I’ve never really been much for the heavy stuff, but I cried no less than three times during season seven.

Just like in the rest of this outstanding series, the performances are what really push it over the top.  Blanca (Laura Gómez), whose role has been gradually increasing over the course of the show, plays huge role in this final season, as does Maritza (Diane Guerrero), and both Gómez andGuerrero give stellar performances.  Truth be told, if I named each individual actor that really did their thing this season, I’d end up naming almost the entire cast.

The long and short of it all is, we’ve all witnessed immensely popular shows come to shockingly unsatisfying ends – cough, Game of Thrones, cough, cough-- but that is just not how this one goes down.  Jenji Kohan created a masterpiece; a tapestry woven out of human emotion, philosophical debate, spot-on socio-political commentary, and eye-opening realism.  Orange has been devastating, heartwarming, intense and light-hearted all at once.  #orangeforever