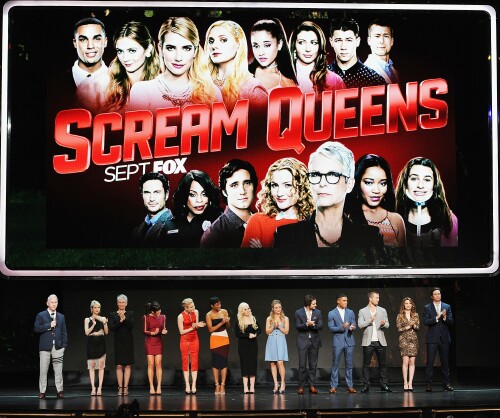 With the exception of “Gotham” -- at best only a modest performer -- it can be said with hindsight clarity that the fall schedule Fox announced one year ago was filled with freshmen failures.

But its midseason was something else entirely. Earlier this year Fox debuted the hip-hop serialized drama “Empire” (plus the odd survivor "The Last Man on Earth") and just like that everything changed for the network. Right out of the gate this show was a phenomenon, and it restored to Fox its long-held reputation for continuously achieving success with at least one of “those shows" – “those shows” being defined as highly unique, exciting and quite unlike anything else on television. Think of past shows that laid the foundation for this distinction, among them “The Simpsons,” “The X-Files,” “House,” “24,” “That ‘70s Show,” “Malcolm in the Middle,” “American Idol” and “Family Guy.” And now, “Empire.”

And soon: What? With one exception the schedule Fox announced to advertisers and the press on Monday seemed to be playing it a bit safe. That exception is “Scream Queens,” a limited series horror-comedy hybrid from Ryan Murphy and a show that looks like it will be as famously messy as so much of Murphy’s previous work and yet likely to attract legions of fans and a lot of attention from the press. How can it not, with the original horror movie scream queen Jamie Lee Curtis in its cast? Plus, Nick Jonas comes and apparently goes early on. (A clip shown during Fox’s Upfront presentation, in which young women were buried up to their necks in the front yard of their sorority house, and one of them was apparently run over by a power mower, was deeply disturbing, especially because so many Millennials in the Beacon Theater laughed while watching.) For better or worse, this will be one of the most talked about new series of the fall, at least for the first few weeks, and reporters and editors at entertainment magazines will likely continue tumbling over it even if the audience goes away. (That's the cast and creator Ryan Murphy up top introducing their show.)

Fox is certainly all-in behind this one. The network staged a colorful street promotion for “Scream Queens” on Monday in front of the Beacon Theater, once again the home of Fox’s Upfront presentation. Hordes of female and male cheerleaders with knives sticking out of their backs thrust sweet treats at advertising executives, journalists and anyone else who passed by them.

“Scream Queens” will run at 9 p.m. as the second half of an all-new Tuesday lineup, which will begin with two comedies that don’t appear to be anything special but might have some disarming appeal. The first is “Grandfathered,” with John Stamos as a bachelor who discovers he is a father and a grandfather. The second is “The Grinder,” with Rob Lowe as an actor who portrayed a lawyer in a television series and is now attempting to be one in real life despite never having studied law. At first blush it would seem that the Stamos series has a better shot than the Lowe show, but Lowe was awfully funny in a video about Online Viewability Standards that Fox ran at its presentation, so it’s a toss-up.

On Wednesday Fox has chosen as the new lead-in to “Empire” the drama "Rosewood," about a sexy Miami pathologist who solves crimes while coping with grave medical issues of his own. Sounds better in every way than “Backstrom.” The other big new show on Fox this fall is the television adaptation of the Steven Spielberg action-thriller “Minority Report.” Do futuristic thrillers work at Fox? Let’s ask the makers of “Almost Human.” "Minority Report" will be the lead in to "Gotham" on Monday.

The biggest news to come from Fox about next season has nothing to do with its new 2015-16 series. Rather, it is the announcement that the long-time ratings behemoth “American Idol,” now on something of a slide, will end after next season. (Many millions of people still watch this show. I like to think a smart cable network would make a play for it, restore it to its former high-impact simplicity and enjoy several years of success.) The other big Fox buzz centers on the return in January of “The X-Files” as a limited series. I loved this show as much as anyone else early on and I grew as tired of it as everybody else near the end. Do we all want to see the characters of Fox Mulder and Dana Scully still grappling with the extraordinary challenges of their young adulthood well into middle age? I’m not saying no. I’ll give it a “maybe.” Regardless, the media is going to go mad over this one.