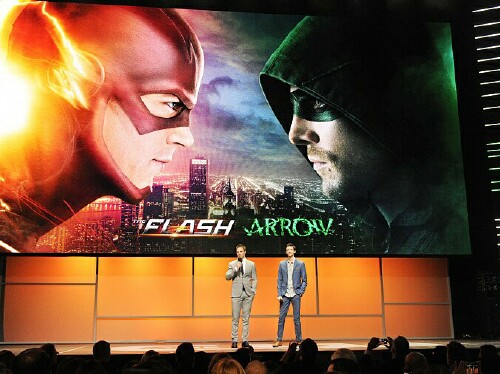 I've been attending broadcast Upfront presentations for 25 years – and I don't think I have ever been to one that introduced only one new fall series. But that was the case yesterday when The CW revealed details about its 2015-16 season at its event, which just proves that if you attend these things long enough anything can happen.

The lone new show on The CW's fall schedule is the hour-long comedy "Crazy Ex-Girlfriend." It's about an unstable lawyer who gives up her spectacular life in Manhattan to follow a man she was obsessed with during her teen years to far-flung West Covina, CA. It's a little like the beloved drama "Felicity" on The WB – a lot of fun as long as one doesn't give it too much thought. (The title character on that show also upended her life to obsessively follow a guy to the other side of the country.) The preview for this show, which included many clips from a well-produced musical number in the pilot featuring series star Rachel Bloom, went over very well with the crowd at the New York City Center (a wonderful venue for Upfront events, by the way). Happily, I'm told many (if not all) episodes will feature similarly catchy and funny and somewhat inappropriate original tunes.

"Crazy Ex-Girlfriend" will be paired on Monday nights with sophomore comedy-drama "Jane the Virgin." (The "Virgin" cast is pictured below.) If "Crazy" holds up, it could provide the audience flow that "Jane" needs to generate ratings that might be more in line with the level of its critical acclaim. The two shows certainly seem like a promising pair. 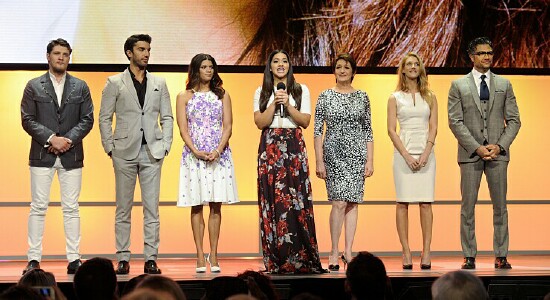 Tuesday will return intact with "The Flash" – the network's highest rated series -- and fresh midseason success "iZombie." Wednesday also will remain unchanged with its pairing of "Arrow" (which has benefitted from cross-overs with "The Flash") and "Supernatural" (the enduring popularity of which is now one of television's greatest mysteries – and I say this as a huge fan of the show's earlier seasons).

CW President Mark Pedowitz announced that, following the success of the two-part "Flash"/"Arrow" crossover last December there will be another one this fall (and more to come in future seasons). "Arrow" star Stephen Amell and "Flash" star Grant Gustin appeared together (see photo at top) to promote their shows and the upcoming "DC's Legends of Tomorrow" (more about that one below).

"The Vampire Diaries" and its spin-off, "The Originals," will be put together on Thursday. This could be a challenging night for the network. "Diaries" will have to reimagine itself now that Nina Dobrev, the actress who portrays the central character on the series, has departed after six seasons. (Her character, Elena, is in a sort of limbo.) "Originals" has simply never been as popular as "Diaries" and will likely suffer if the latter doesn't perform well.

Friday, like Monday, will feature two hours of female-driven programming with the pairing of the romantic drama "Reign" and the cheesy reality series "America's Next Top Model."

The CW has two series in development for midseason – the aforementioned "DC's Legends of Tomorrow," which features characters from "The Flash" and "Arrow" and may be the first series in television history to be simultaneously spun-off from two shows, and "Containment," a rather unpleasant looking thriller about people quarantined in Atlanta after the outbreak of a lethal virus in that city. Also on deck for midseason are new seasons of the gritty and graphic sci-fi adventure "The 100" – a slow starter that has been steadily building an appreciable fan base -- and "Beauty and the Beast," about whose continued survival I have no words. "Beast" has to be the most under the radar program on broadcast television, but it has been with us for several years, so somebody must be watching.