For Broadcast TV, Fox's "Grease" Was the Word 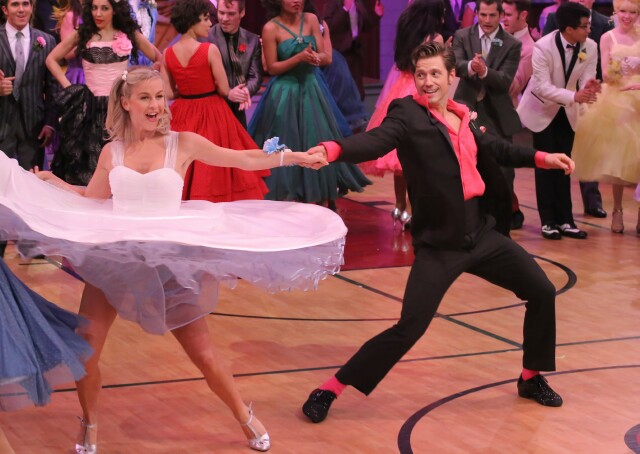 For as far back as I can remember, “Grease” has been “the word.” And yet, throughout Sunday night’s three-hour live production of that campy pop-culture classic many other words came to mind: “Dazzling,” “thrilling,” “ground-breaking,” “entertaining” and, especially, “broadcast the way it ought to be.”

As previously reported here, I knew “Grease Live” had potential, but I never expected it to be the instant sensation that it became even before it ended.

People of a certain age can readily remember when broadcast television routinely brought together millions of people from all walks of life to enjoy an exciting shared experience and then happily talk about it the following day. Watching “Grease Live!” on Fox Sunday night felt a lot like that. The response, of course, was immediate and constant in that moment-by-moment way (and “Grease Live!” was filled to capacity with moments that demanded an immediate response on social media), but in every other way watching this production felt a lot like watching almost anything that was special in the pre-cable broadcast days, and in all the right ways.

According to this article in The New Yorker Twitter is in real trouble. I hope that isn’t true, because it certainly enhances live viewing experiences, last night’s telecast of “Grease Live!” being a prime example.

For more than a year we had been made to believe that “Grease Live!” would mark Fox’s entry into the live-musical genre that NBC has in recent years so winningly revived with “The Sound of Music,” “Peter Pan” and “The Wiz.” (Well, that might be a bit of an overstatement, but two out of three ain’t bad.)

Critics and ordinary viewers alike wasted no time at all comparing “Grease” to the landmark NBC telecasts. But as “Grease” moved so spectacularly along during its three hours, feeling more and more to me like something I had never before seen on television as it zigged and zagged from one terrific set to another on the expansive Warner Bros. lot, defying even the omnipresent threat of El Nino-induced storms, I realized that it didn’t really belong in the same category as the NBC productions.

In short: NBC for three years has delivered live musical theater into millions of homes. Fox did something different: It delivered what can only be described as a live movie. And, we can only hope, both networks will continue to do what they have done for many years to come. (This might be the right time to give a shout out to BBC America’s presentation last October of the 40th anniversary staging of “The Rocky Horror Picture Show” at London’s Playhouse Theatre. It wasn’t telecast live, but it was taped live and was certainly the next best thing.)

Maybe “Grease Live!” was something more than a live movie, because it periodically revealed to home viewers how it was making magic happen with live glimpses of behind-the-scenes action. This either enhanced the viewing experience or not, depending on one’s point of view. I’m old-school enough to not appreciate such distractions from the entertainment at hand – though I’m not including the fantastic performance by Jessie J of the “Grease” theme song that opened the show with a jaw-dropping tracking shot that followed her from set to set, out into the rain and back again, simultaneously setting the tone of the entertainment to come and locating viewers square in the middle of a Hollywood backlot in full production mode. 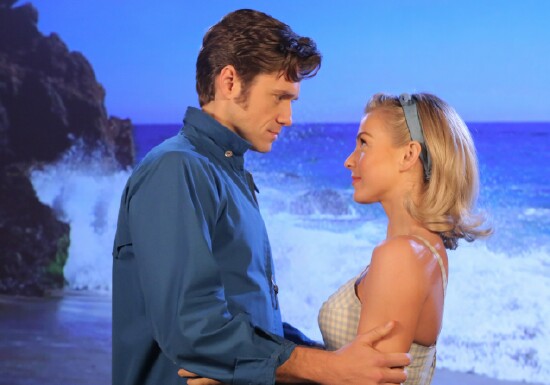 Nit-pickers might note that the show actually began with Aaron Tveit as Danny and Julianne Hough as Sandy saying their end-of-summer goodbyes at the beach (pictured above), exactly the way the movie with John Travolta and Olivia Newton-John opened, but from the minute the camera pulled away Jessie J owned the segment.

From there on it was three hours of pure television magic (and I use that word often and deliberately), interrupted only by commercials (which weren’t all that annoying, as they provided time for the performers to catch their bearings and viewers to tweet without missing anything). One commercial break was even worked into the story itself -- a natural break, introduced by Mario Lopez as TV host Vince Fontaine during the epic dance sequence in the Rydell High School gymnasium. This was just one of countless touches of creative genius that informed every moment of “Grease Live!” as conceived by director Thomas Kail, who is also the director of Broadway phenomenon “Hamilton” and is plainly a formidable talent intent on changing the way people view long-established entertainment formats. (What would he do with a movie, I wonder?)

Who cares if Aaron Tveit didn’t have the swagger or sex appeal of John Travolta as Danny, or if Julianne Hough is a better dancer than singer, or if lyrics for several songs (especially “Greased Lightning”) had to be furiously reworked for television (which impressed me, actually, in this day of ever-encroaching “edge”), or if the sound dropped out for a few nerve-frying moments during the big dance-off, or if Mario Lopez’s appearances at commercial breaks were more wearying then welcome? (Lopez was, however, perfectly fine as Fontaine.) Only a grump or a played-out Christmas Grinch would focus on those soft spots. This was in many respects a once-in-a-lifetime television event that was more damn entertaining than anything I can think of in recent years.

Among the highlights: A breathtaking and heartbreaking performance of “There are Worse Things I Could Do” by Vanessa Hudgens (as bad-girl Rizzo), who had lost her father less than 24 hours before the show and proved herself to be the ultimate pro (and, in my opinion, a superstar in the making if she manages her career the right way), fun appearances by Didi Conn and Barry Pearl (both from the original “Grease”) and the band DNCE featuring Joe Jonas (much more welcome on this Sunday than Winter Storm Jonas the previous weekend), dazzling sets, inventive choreography (by “Glee” dance-master Zach Woodley) and mind-blowing recreations of seemingly challenging scenes from the movie (including the drive in, the drag race and the carnival at the end). 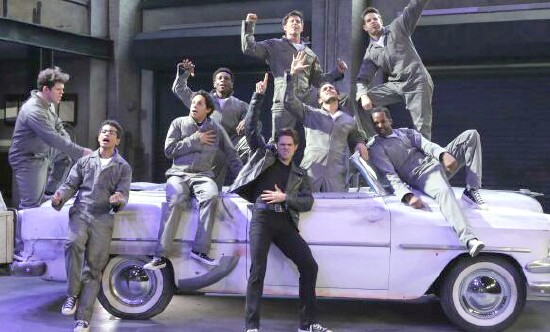 Especially unforgettable were the sleepover scene that unexpectedly transitioned into a high-octane USO show (with a surprisingly accomplished performance by Keke Palmer of “Freddy My Love”), the show-stopping production number built around “Greased Lightning” (pictured above, in which the set, the car and the dancers were miraculously transformed from one thing to another and back again), the aforementioned “Born to Hand Jive” dance sequence that at some times equaled and at others surpassed the spirited energy of the same scene in the movie and, again, Hudgens’ big number.

I also appreciated the fact that the students and faculty at Rydell High School were diverse, and that the character of Eugene the geek was treated with kindness throughout much of the story rather than being constantly mocked and harrassed as he had been in the original. Even classics have to keep up with the times.

Excluding my enjoyment of two of NBC’s live musicals, I can’t remember the last time a night spent watching a broadcast network made me so happy in so many ways. (I probably have to reach way back to the early “American Idol” finales to find anything comparable.) We can’t expect entertainment like this every night, but it’s clear that special events are the way to go for the broadcasters if they are to continue outpacing their competitors.

“Grease” is still the word, but it’s clearly the way, as well.

Images courtesy of Fox. The opinions and points of view expressed in this commentary are exclusively the views of the author and do not necessarily represent the views of MediaVillage/MyersBizNet management or associated bloggers.