For Sports it's "Game On" at CBS 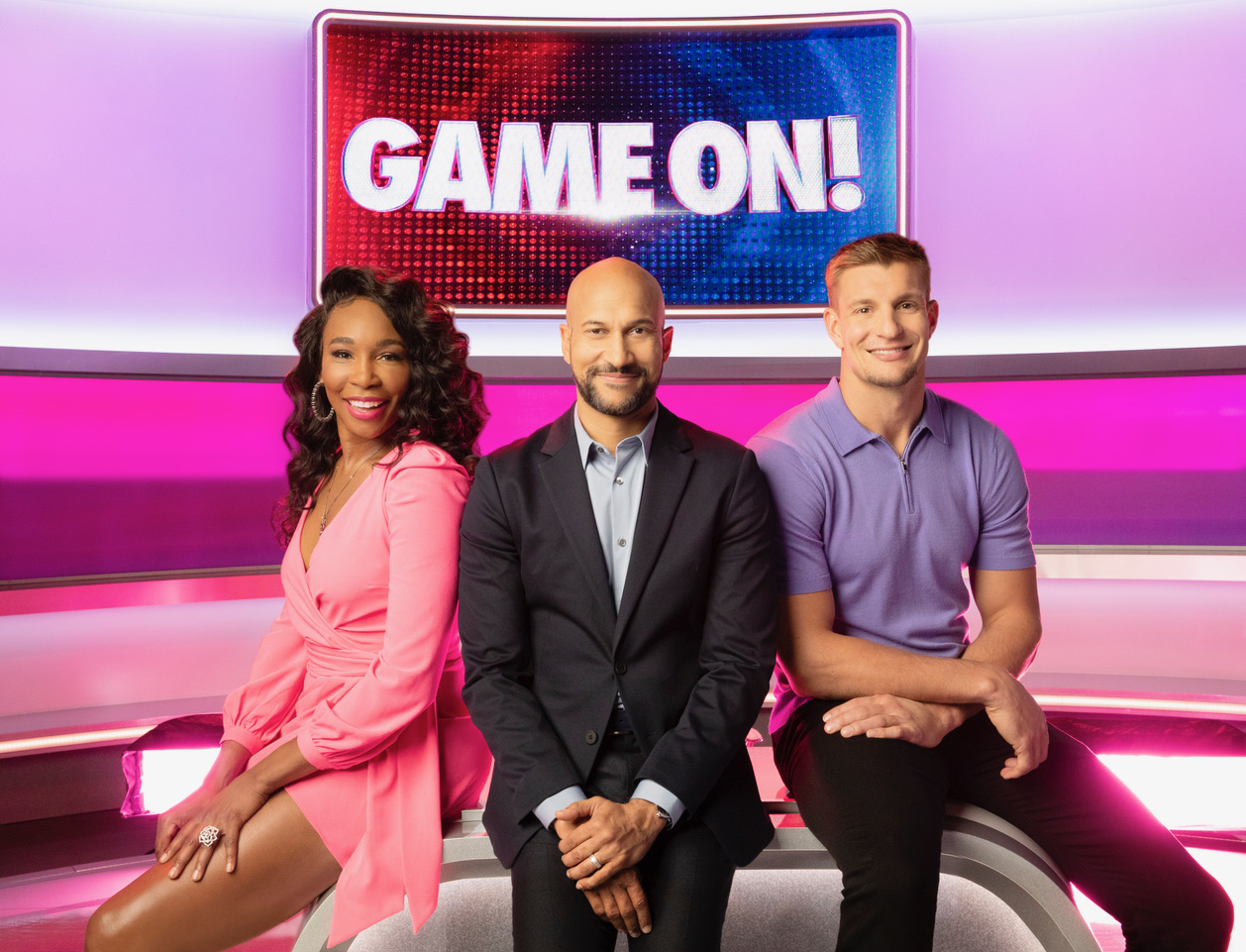 Game On is telecast Wednesdays, 8 p.m. on CBS. As sporting events continue to be side-lined, as a result of the Coronavirus shutdown, CBS is hoping to fill the void courtesy of its new competition show Game On. Based on the hit British series A League of Their Own, Game On is hosted by Keegan-Michael Key and features teams captained by Venus Williams and Rob Gronkowski, who also serve as exec producers alongside James Corden, who makes a celebrity appearance on the show. Shot last fall before the shutdown, the hair-raising stunts and antics are sure to entertain America, just as it has been doing in the U.K. "The show has run at home for 15 seasons and is a flagship show on the network," explained Corden in a Zoom chat hosted by CBS to promote the series. "America was first to combine sports and entertainment, and we thought if this show had been such a smash in the U.K., and we could find the right trio of people [to host], there was absolutely no reason why this show couldn't work in the United States.

"The series was born out of chemistry," he continued. "As soon as we started speaking to Venus, Keegan and Gronk (pictured left to right above), it became clear that between these three it was an incredible opportunity to take the series to CBS. Their enthusiasm was so great, and they understood the show instantly. It's exciting to see the team captains do these incredible stunts that you'd never normally get to see. At a time we're all missing sports, it feels like a wonderful time to present it and we're incredibly proud of it."

"It was the team behind the show that initially attracted me," said Key of his involvement as host. "I was familiar with the British format and I'm a big fan of James Corden. I'm also athletic and enjoy the rush you get from competing. I'm also a sports fan in general, so the fact the format and theme were wrapped around sports was really exciting to me. There's a wonderful joy in this hybrid quality in that it's not about only competing, and there's lovely banter between the guests and our regular panelists. There's also an unexpected nature in not knowing what the challenges are going to be that was especially titillating and what really drew me to it."

After retiring from professional football in 2019, Gronkowski admitted he was "missing the feeling of a family" he had on the field. "I missed that aspect and after not playing this was the chance to regain that atmosphere" he revealed. "Keegan, Venus, and James felt like family and we're all still laughing after the show was done - - that's what great about it. I compete all the time, so the show fit well. I do like to laugh so there was comedy as well. It also challenged my mind and skills."

Some of those skills were really put to the test as the team captains stepped out of their comfort zones to compete in the hair-raising stunts. "The one that made me nervous was Dangerous Sit-ups," laughed Gronkowski. "You're hoisted up on a bungee cord to the ceiling, and on top of that you get flipped upside down and then have to do as many sit-ups and touch your toes till you can't do them anymore. Let me tell you, that was scary and did make my stomach turn which is why Venus won the competition." 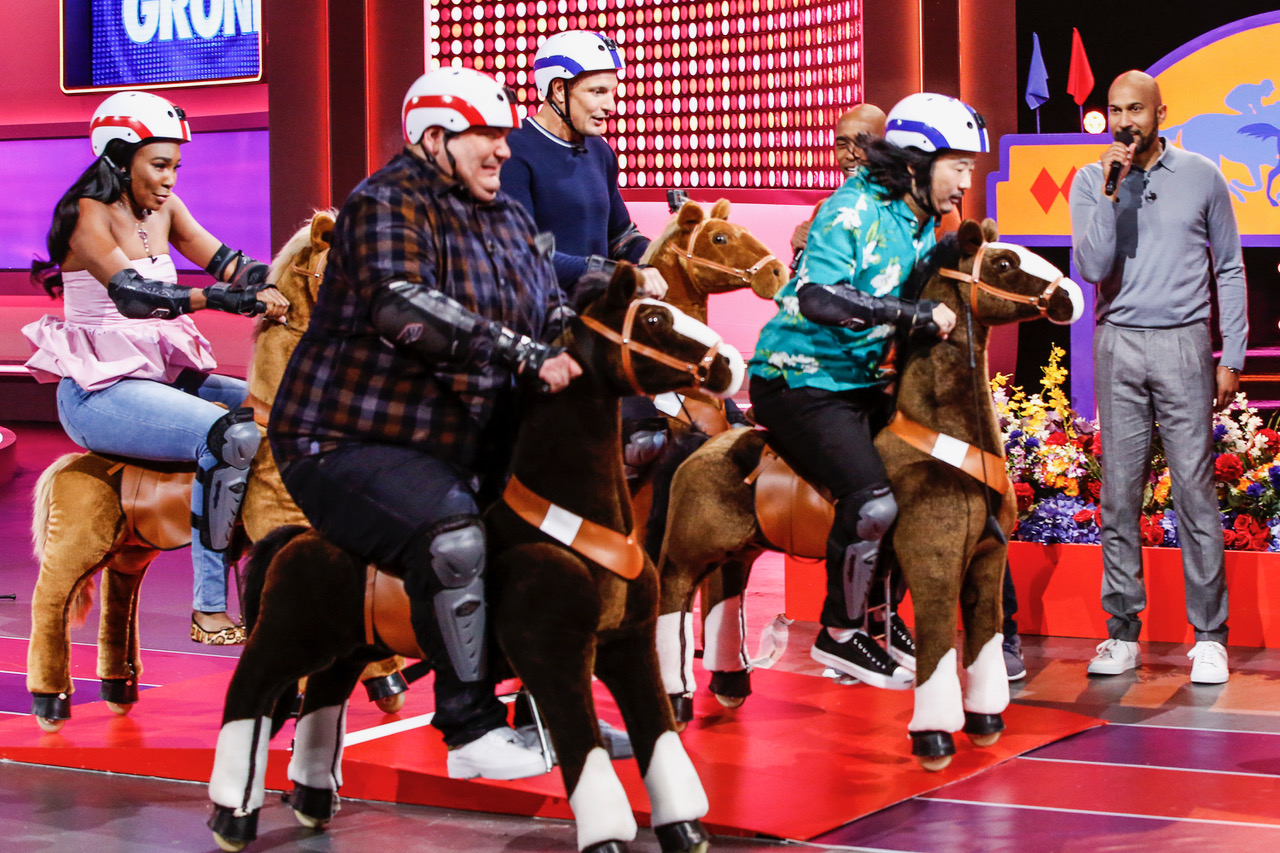 "I have to tell you I did secretly prepare for it because I watched the British version," recalled Williams of the challenge. "I knew it was going to come up, so I trained on a slant board with a medicine ball. It was frightening though, and I literally never opened my eyes. Once they started tilting the platform, my eyes were closed, and I was done - - James has a wicked sense of humor."

When it came to his participation in one challenge as a celebrity guest on the show, for Corden it was as a chance 'tick' a bucket-list moment. "My episode was fun," he shared. "The highlight was Venus, Gronk, me, and Ian Karmel (one of the regular comedians) dancing with the Laker Girls at the Staples Center during half time. I have had a lot of moments in life where I go, "I can't believe I am doing this?" But standing in the tunnel watching LeBron (James) and the guys leave the court; standing with Venus, a god and legend in my eyes; Rob, one of the greatest tight-ends of all time, dressed and surrounded by Laker girls. But seeing these athletes who've performed at the pinnacle of their sports be completely terrified, was fantastic."

With the first season wrapped, everyone involved is hopeful of a second season. However, post COVID-19, how that might look is undetermined. Still, it hasn't stopped them from compiling a dream-list of future participants. Key wants Dennis Rodman and David Beckham, Williams her sister Serena, and Gronkowski would love to see Shaq. "He likes to be the best at whatever he's doing," he said of O'Neil. "I'm the one usually having garbage talk thrown at me by smaller guys, so I want to do it to him as he's way bigger than me. I'd like to know how it feels."

As for Williams, "It would be great to be on the same team as Serena, as we could double team Rob," she laughed. "But I don't know if she could do some of the challenges."