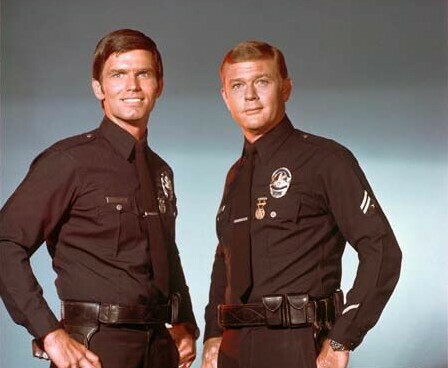 The passing of Martin Milner earlier this week brings to mind thoughts about his best known work -- the role of Officer Pete Malloy on the crime-drama classic “Adam 12,” which ran on NBC from 1968-1975. In an interesting bit of timing, I had just last week watched an episode from the seventh season of "12" that recently played on Me-TV. Chillingly titled “Citizen with a Gun,” it addressed an issue of huge importance when it first aired (in March 1975) that has only intensified in the four decades since: The proliferation of guns and issues involving gun ownership.

I didn’t pay much attention to “Adam 12” when it ran way back when, but I have checked it out in recent years, and what strikes me most about the show is how it presents most of the officers in the Los Angeles Police Department as hard-working, humble and trustworthy – and always willing to put their lives on the line in the line of duty. It’s interesting to recall that “Adam 12” came along at a time when it was increasingly acceptable to refer to cops as “pigs” because of a handful of violent incidents involving law enforcement that fomented media feeding frenzies and galvanized people across the land. Protests against police, many ending in violence, were not uncommon during that period.

Somehow, in the middle of all that, “Adam 12” survived and thrived with its depiction of police officers as dedicated public servants who were there to assist and protect us all. Central to this message and the continued success of the show were the perfectly modulated performances by Martin Milner (pictured top right) and his co-star, Kent McCord (top left), who played Officer Jim Reed. (Milner and McCord also appeared as Malloy and Reed on a few episodes of the NBC drama “Emergency!”)

Malloy was the tough-talker, thoughto my knowledge he never overtly played the“bad” cop. Reed was always soft-spoken, even when a gun was pointed in his direction. In short, these were two cops every viewer wanted to see on patrol in their neighborhoods, especially at a time when the crime rate in this country was out of control. (I should pause here to note that Milner’s first major television role was in the drama “Route 66,” which ran on CBS from 1960-64. That was before my time as an avid watcher of television, but without “66” most of us would likely never have had the chance to get to know Milner on “12.”)

I had intended to write about “Citizen with a Gun” even before learning that Milner had passed, because I found this particular episode to be an invaluable cultural artifact when processed through the current prism of gun-related violence in this country, not to mention the problems with certain law enforcers and police departments.

Guns play a major part in many plotlines during the fast-moving half-hour. In one story, a wife-beating husband flees out the back door of his home with gun in hand after Malloy and Reed respond to a domestic violence report. When they apprehend him, the husband protests: “What is this? I’m no criminal!” It turns out the gun is not loaded, something the officers didn’t know when they cornered him. “There’s no law against having [a gun] on your own property, is there?” the man complains, explaining that there have been a lot of burglaries in the neighborhood and people should keep guns for their own protection. Disturbingly, the man’s wife does not press charges against her husband. Tellingly, Malloy and Reed never lose their cool dealing with what he has done or the weapon he is holding.

We later learn from a colleague of theirs, Officer Wells, that his wife’s cousin Virginia keeps a gun in her home. When Malloy and Reed meet her at a firing range, where she frequently practices, Virginia says of her decision to get comfortable with a firearm, “I get frightened being alone in my house at night.”

“It’s hard to get through to people,” Malloy cautions. “You buy a gun, you had better treat it with respect.”

Later, Malloy, Reed, Wells and his partner Brady respond to a report about a robbery at a house. When they arrive the owner of the house, a Mr. Devoe, takes a shot at Wells, taking out a backyard birdbath instead. The owner insists that he thought Wells was the robber, who had tried to steal a power saw and was apprehended by the officers. The officers are not pleased, given that one of them was almost killed or injured, though they remain cool, calm and collected at all times.

“Why hassle me?" Devoe argues. "I have the right to defend myself, don’t I?”

“Well, he [the robber] was on my property!” Devoe says.

“Even if he was on your property, you have to prove that he threatened you,” Reed advises.

“What am I supposed to do, ask him if he’s armed?” Devoe asks in disbelief. “What if he was in my house?”

“Well, he wasn’t,” Reed replies. “That could have been some kid crossing your yard.”

“You caught [the robber] with the goods!” Devoe says.

“That’s not enough,” Malloy explains. ”If you had shot him we’d be arresting you!”

“That’s terrific!” Devoe fumes in disgust. “Where did you dig up that law?”

“Section 197 of the penal code,” Malloy impressively answers in an instant.

“Yeah, I’ll read it the first chance I get,” Devoe replies, his voice dripping with condescension.

“I’d recommend you do that,” Malloy advises. “If you’re going to keep a gun in the house you had better know the limitations of your legal rights.”

At that, Devoe runs out of patience. “It’s some kind of game, right? The next time I catch a crook I should drag him into the house before I shoot him … make it nice and legal!”

“Not unless he tries to drag you in first,” Malloy matter-of-factly suggests.

“They sure take care of the punks, don’t they?” Devoe complains. “I can’t even protect my own property!”

“Is a power saw worth killing over?” Reed asks, ending the conversation in that episode.

Unfortunately, the general conversation about guns continues to this day, with greater urgency than ever before.