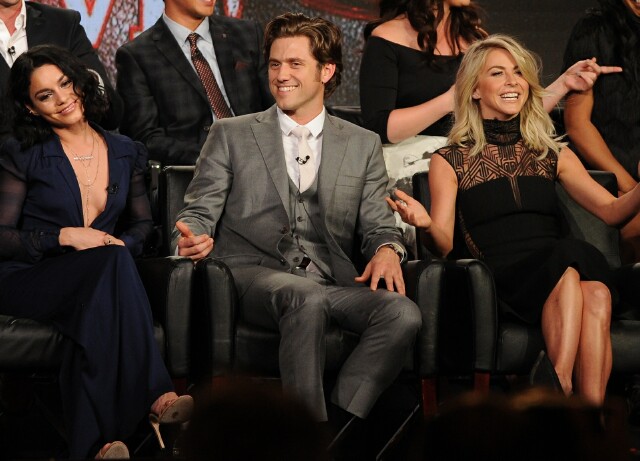 Pasadena, CA – Fox on Friday produced yet another slam-bang day at a Television Critics Association tour with panels for a number of the most exciting broadcast programs coming up during the next few weeks, including the return of sci-fi classic “The X-Files,” a live telecast of the musical “Grease” and the final season of one of the most powerful shows in the history of television, “American Idol.”

I have to imagine that, moving forward, Fox’s Winter TCA days, which have been largely powered since 2003 by annual panels for the always-newsworthy “Idol,” are going to be lacking some of their usual excitement. But we’ll worry about that next year. Friday, in addition to host Ryan Seacrest and judges Jennifer Lopez, Keith Urban and Harry Connick Jr., Fox’s final “Idol” panel (pictured below) included five past winners – Ruben Studdard, Jordin Sparks, Keith Allen, Scotty McCreery and 2015 idol Nick Fradiani, plus 2011 runner-up Lauren Alaina. They will all be cycling through this last season of “Idol” on Fox, along with most if not all of the noteworthy winners and other alumni from throughout the show’s run, making for a collective reminder of what we have all enjoyed since 2002 and what we’ll be without when Season 15 concludes in April (earlier than usual and, oddly, before the May sweeps). 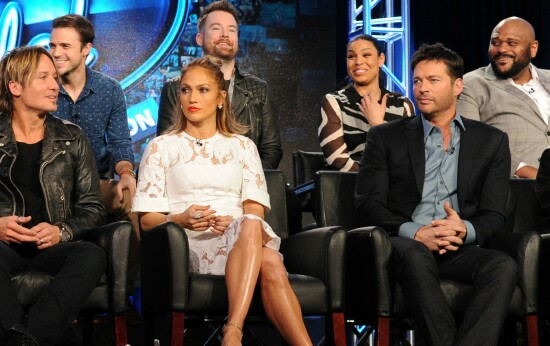 Talking on and off the record with past winners and various executives connected to the show, I couldn’t help but wonder if this season will mark the end of “Idol” or simply the end of its historic run on Fox. Nothing concrete was stated, but all agreed that dozens of networks and programming services would be thrilled to have the ratings that “Idol” still generates. One of the issues is the production costs associated with the show, including its mammoth audition events. But as cable networks continue to prove over and over again, budgets can always be “managed.”

Frankly, I think “Idol” is going to continue somewhere in some form. It’s a household name and brand, arguably more so than any other program on television, and not an asset to simply be snuffed out when millions of Americans are still so attached to it. It’s the only talent competition series in this country ever to produce genuine stars and superstars, something that has eluded NBC’s popular “The Voice” and other such shows.

I’m somewhat surprised that Fox hasn’t placed a former “Idol” star in the cast of “Grease Live,” as it would seem the two could have played off each other. If the panel on Friday for “Grease” (pictured below) was any indication, this production is going to do for Fox what “The Sound of Music Live” did for NBC. At one point during the panel, the cast – including (pictured at top, left to right: Vanessa Hudgens, Aaron Tveit and Julianne Hough -- burst into an impromptu rendition of “We Go Together” that made clear they are going to own this iconic show, at least for one night. The biggest star of “Grease” may be director Thomas Kail, the director of the Broadway phenomenon known as “Hamilton.” (That's Kail on the far right in the photo below.)

The day began with the panel for “The X-Files,” potentially another huge television event of early 2016 and certainly one on the radar of every 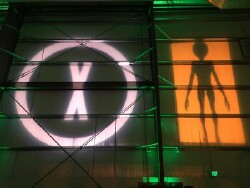 important critic. Many of us were present for the first TCA panel for this enduring franchise way back in the summer of 1993 when nobody, including the executive regime at Fox at the time, expected very much from it. (The in-house pick for giant success in the fall of ’93 was the weird western/science-fiction hybrid “The Adventures of Briscoe County Jr.” with which “X-Files” was paired on Friday nights.)

Earlier in the week, and outside of official TCA activities, Fox held a premiere event and party for the show at the California Science Center. Episode one played extremely well on an IMAX screen, as if it had been shot for theatrical exposition. The after-party was at the Samuel Oschin Pavilion where the Space Shuttle Endeavour is housed. (In fact, much of the party was actually situated under the Endeavour.) It’s clear that when it comes to reviving and possibly continuing this franchise Fox is all in.

There was also a session for Fox’s upcoming presentation of “The Passion,” which will tell the story of Jesus’ last days through contemporary music. Tyler Perry is among its executive producers. "The Passion" will be telecast live on Palm Sunday from locations in New Orleans.

Absent from Fox’s Winter tour was pretty much anything to do with the series the network was most excited about at its Summer 2015 tour, “Scream Queens” – and yet, it prompted some of the most interesting comments made by Fox Television Group Chairmen and CEOs Dana Walden and Gary Newman (pictured below) in their session with the press, during which they announced that Ryan Murphy’s controversial horror-comedy hybrid has been renewed for a second season. (The Season 2 narrative will be set in a hospital.)

“‘Scream Queens’ draws a very hard to reach, upscale audience,” Newman explained. “It’s the No. 1 new comedy among young adults, the No. 1 new series on VOD and the No. 1 new series on social media. While everyone in this room knows it didn’t break any records in its Same Day performance, its young and upscale audience is watching the series on its own terms. Across platforms, its average total viewership grows by 167%. When we look at it holistically, we see how fans are watching the show and it tells a pretty positive story.”

Referring to a slide, Newman continued, “If you look at ‘Scream Queens’’ viewership by platform over 30 days, you’ll see that 30% of its viewers watched live and another 26% watched on DVR. But what was most interesting to us is that 44% of its audience watched on VOD, Hulu and FOX NOW.

“These are ad supported platforms with fast-forwarding disabled and are only partially reflected in Nielsen’s ratings,” he added.

As impressive as the metrics of success for “Scream Queens” may be, I have to wonder if its young audience will stay with it once its setting moves from sorority and fraternity houses to a medical institution. We’ll see.

Further questioned about delayed viewership of “Scream Queens” and other Fox shows, Newman replied, “We’ve sold a substantial amount of our ad time on C7 this year, a lot of it also on C3. So I think there’s a general move in the direction of recognizing that delayed viewing is part of the contemporary experience. We’re also having conversations with advertisers about co-branding opportunities, trying to find new ways to associate the brands with our shows. We’re always very careful about that because you don’t want to over-commercialize the content. I don’t think the audience wants that.

“Monetizing the non-Nielsen rated viewing remains a challenge,” he continued. “Advertisers understandably want a reliable currency, and we’re working on that, trying to get that. Whether through dynamic ad insertion or in other ways, we do have advertising on FOX NOW. We have it on Hulu. And we have it on VOD, even outside the three- and seven-day VOD windows. So, more and more we’re monetizing that nonlinear viewing, and that’s a trend that is not only incredibly important to us, but it is one advertisers recognize has to be part of the future of broadcast television.”