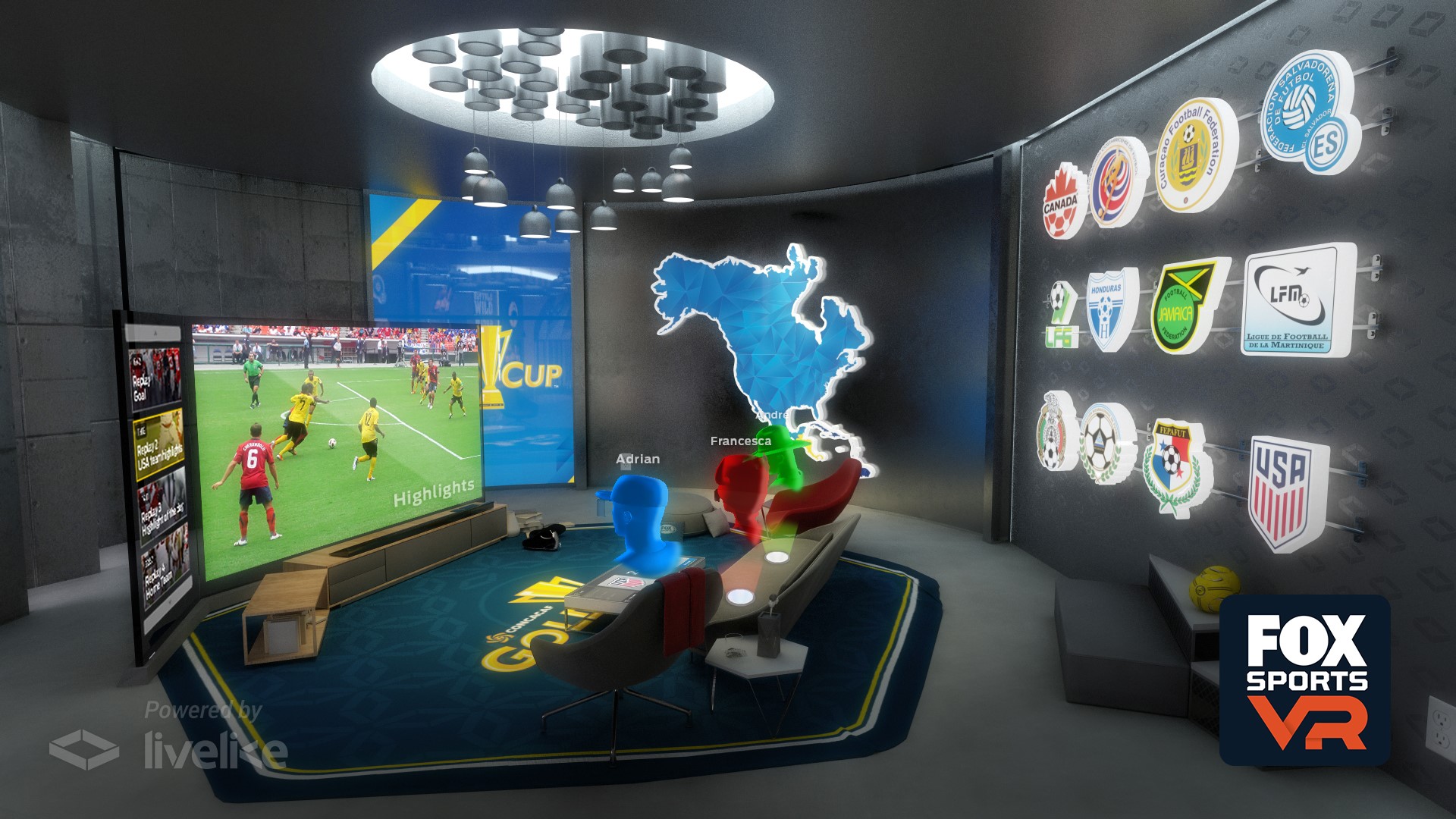 Fox Sports and LiveLike, having already collaborated on virtual reality presentations of the UEFA Champions League final and the 2016 MLS Cup, are kicking things up a notch with the Gold Cup.  Starting with the U.S.-Panama match July 8, the companies not only will produce a total of three games from the biennial, 12-nation soccer tournament in VR, but will feature an ordering component from sponsor Buffalo Wild Wings.

In another first, coverage from the tournament organized by CONCACAF representing nations in the North, Central American and Caribbean regions, will include a social networking element with Facebook, enabling four people to communicate about their virtual viewing experiences.

The enhanced watching is accessible through a mobile-specific, interactive 360-degree viewing experience built specifically for smartphones, or with Samsung Gear VR or cardboard headsets.  Fans enter the “virtual suite” by downloading and installing the free Fox Sports VR app and signing in with their MVPD provider credentials.

Users can watch the enhanced Gold Cup matches -- one of the semi-finals on either July 22 or 23 and the championship contest on July 26, which will also be captured in VR -- by choosing from multiple high-resolution camera positions or screening the director’s cut that automatically selects the angles.  They can also view replays in the format.  The tournament, which kicked off July 7, will unfold in 14 U.S. stadiums with the action on Fox, Fox Sports 1, Fox Sports 2 and FXX.  Univision holds the Spanish-language rights.

Fox Sports Senior Vice President of Field and Technical Operations, Michael Davies, said the Buffalo Wild Wings deal marks the first time the programmer has steered a VR sponsorship deal outside of the auto category and represents its deepest integration within the virtual environment to date.  Past VR sponsorship plays with Toyota (the 2016 Daytona 500), Lexus (2016 U.S. Open golf championship) and Jeep (2017 Big East basketball tournament) largely centered on logos and back plate signage within the virtual environments.  Audi’s sponsorship of the partners’ VR coverage of the 2016 MLS Cup was more elaborate.

In addition to branding, LiveLike parked a digitally rendered Audi on the virtual set and also drove the “Audi Player Index Score,” which calculated players’ performances tied to various in-match metrics.  “It helped because Audi is a sponsor of MLS,” said Davies.

While Buffalo Wild Wings’ identification will be prevalent around the suite, a virtual plate of wings may prove to be the tastiest part of the pact.  In watching a demo for the Gold Cup, Davies noticed the faux platter and it whetted his appetite.  From there, LiveLike worked on bringing the icon to life: upon clicking on the plate, users will be taken to an ordering website.  He said this activation enhances the restaurant’s sponsorship experience beyond the association with the content.  If this transactional element is successful, LiveLike may work on developing a system that could bring the ordering process within the virtual suite.

Working with CONCACAF, Fox Sports is also producing a trio of sponsorable, 360-degree features.  Davies said they could focus on team arrivals, peaks inside the locker rooms, or preparation on “match day minus one,” the day before the encounters.

Fox, which also works with NextVR through a five-year partnership, has offered VR takes of other big events, including Super Bowl LI, the 2016 Bundesliga season over, college football (including the 2016 Big Ten championship) and a PBC heavyweight title fight over the last 18 months. Still, Davies reminds that the medium is in relatively early days, with Fox viewing VR as more of a companion to, rather than a substitute for, its linear telecasts.

While commercials can be inserted into the live-streams, Davies believes marketers can explore various opportunities.  Autos, for instance, would be well-served to provide users with a virtual view of what it’s like to drive one of their latest models and the ordering system could be adapted to schedule an actual test drive with a nearby dealer.  Davies is also of the mind that flashier imagery -- perhaps an icon being dropped or moving around the suite -- would engender comments on social media and likely draw more attention to the nascent platform.

Such discussions -- or perhaps conversations about whether users prefer traditional or boneless wings, mango habanero or parmesan garlic seasoning -- could presumably take place among participants in the fledgling social virtual reality setting that launches July 8.

Inside the Fox Sports VR app users will find a “social” tab and a “join friends” button that connects them to Facebook upon authorization.  Those who have acted similarly can recognize each other's avatars and communicate throughout the experience.  LiveLike has integrated software supplying a conference call-type functionality that will let participants talk through their headset with Gear VR or smartphones.  Users could join their Facebook friends, supporters of the U.S. or Mexican sides, or random entrants.

The social aspect plays into how many prefer to consume sports: with family or friends, either new or old (think sports bar acquaintances).  That “tribal connection” should grow over time as more users gain social system admittance.  The capability could encourage significantly more people to engage in VR, whose growth has been hamstrung to some degree because the current immersive experience is isolating, with users attached to headsets and goggles.

With “dwell time” in the VR app already increasing, Davies said Fox, over the course of the three Gold Cup matches, will assess whether users are spending more time with the platform, given the social element.

Davies believes the integration of the social component into the virtual environment could be “an inflection point” for the industry.