Fox's Kevin Reilly at TCA: "We Can't Be in the One Size Fits All Business" 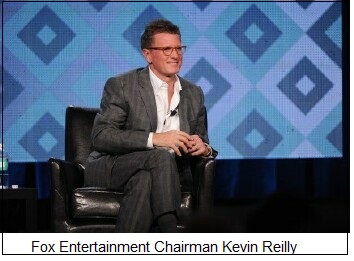 Fox is declaring an end to its participation in the traditional pilot season. Again.

Ten years after a previous regime of Fox Entertainment executives first attempted to steer the Titanic in a new direction, and then learned that it was damn near impossible to do so, Fox Entertainment Chairman Kevin Reilly yesterday declared that his network for the first time will be "bypassing" pilot season in 2014.

"The broadcast, development and scheduling system was built for a different era," Reilly explained. "It was built in a three network monopoly when we had all the talent and all of the audience. It's highly inefficient.

"We, as networks, will produce 80 to 100 pilots in a condensed [period]," he continued. "After the pilot season is over, we screen them and schedule them and announce them in a compressed and crazy, condensed two week period. We go to the upfront. Then they have six weeks to get into production and get on the air. Honestly, it's nothing short of a miracle that the talent is able to produce anything of flexibility [in its] order pattern.

"Cable networks are able to course correct creatively and reshoot and recast," he said. "When we do that, we are already driving into a time period. We are behind schedule. It's big news when we shut down. Every first season show, whether it's great or whether it's in trouble, needs course correction and needs further cooking. I think we can create a better, more talent friendly, more consistently creative way to do this. We have, in fact, been ordering series throughout the year and are currently in some stage of series production on nine projects as I sit here today. That's before I order one new pilot in this pilot season."

Reilly noted that several of those projects are mini-series or series with smaller episode orders (just like cable shows), including the previously announced "Wayward Pines" (a 10-episode scripted summer series), "Gracepoint" (a 10-episode remake of the acclaimed British series "Broadchurch"), "Gotham" (a series that explores the early years of the young Batman) and "Hieroglyph" (a 13-episode adventure series).

"Of the balance of the many scripts in the process of being read now, I anticipate a few more will be ordered to some version of series or production for this cycle, and then I imagine a balance of those projects will be pushed and ordered for summer or early fall production next year to be almost a full 12 months ahead of development for the following season," Reilly reflected. "So, through the great efforts of my team, we've pushed through. I'm not making declarations about what anybody else should do. I'm not saying what's wrong with the industry. But, for Fox, I think we can build a more talent-friendly way of doing this, get more consistent product with more maneuverability and more scheduling and marketing flexibility."

One big advantage of bypassing pilot season and traditional development structures is that programming is ready to be put on a network's schedule throughout the year. "In this day and age, we can't be in the one size fits all business," Reilly said. "There shouldn't be a set order pattern. There shouldn't be a set time when we launch things. The audience doesn't watch midseason and fall season. They don't know about pilot season. There are so many things, thousands of original shows competing for their attention right now. We just can't do it all at once. We started the rollout this year. We are premiering '24,' one of our flagship shows, in May and playing it into the summer. We're pairing it with 'Gang Related,' which is a great show. We're just going where they ain't. [That] is the way cable was built.

"At one point earlier this year, we were in production on 42 series at once, and some of those series will be airing next summer. We started way ahead of the game and that's really what you have to do. It's not a big story for you guys when cable rolls back a premiere date. There's barely an HBO show that doesn't reshoot half of their pilot every time. And no one throws their arms up about that. That's how you make things great. We want to have that same maneuvering ability. We don't want to be bound by an airdate and then find that we're changing the wheels at 60 miles an hour."

Asked if advertisers pay less for "summer" shows and if that would be a problem, Reilly replied, "No. That's not true. It's actually a fallacy that we've perpetuated. There are advertisers that want and have money to spend during those summer months. We've given them a robust slate of unscripted [summer shows], but we've given them virtually no quality scripted shows. And to the extent we have, we've put them on without any marketing budget and we've told America that they're not important. So that's what we're going to change. We are going to have to break a habit, but that's where cable was built, in the summer. And there is plenty of advertising there. There's plenty of revenue to book over the summer."

Continuing with the theme of his TCA session, which was that the business of television is changing in every way, Reilly also declared that "the standard Nielsen measurement [system] is unfortunately outdated. It is a mere fraction of the television viewing universe.

"Here's what we are seeing this season: VOD is up 44 percent. Streaming on Hulu is up 55 percent. These are for Fox shows. While we are flat in the Nielsen numbers, we would actually be up season to date by 8 percent once you roll up all platforms."

"These are not negligible sums," Reilly declared. "This is television. This is viewing in 2014."