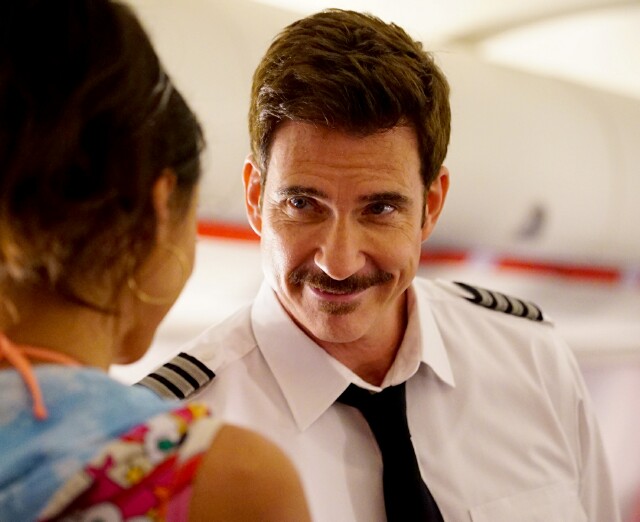 LA to Vegas, Fox’s first attempt at a workplace comedy in 2018, didn’t exactly knock my socks off.  Like a good wine, it needed time to breathe before we were asked to take that proverbial first sip, and due to what feels like impetuous writing we weren’t afforded that opportunity.  However, there was still plenty to like, so before I talk about what could’ve improved this in-flight experience, let’s talk about how great some of it really was – spoilers and all.

Thematically, everything about LA to Vegas is on point.  The show primarily follows a couple of flight attendants, their captain and co-captain, and the group of regulars that flies from the first title city to the second every weekend.  I like how at the top of each new day in the show there’s an on-your-ticket style flight number/time/date stamp at the bottom of the screen.  That, combined with the crews’ uniforms and the fact that most of the show takes place on a plane or in an airport all fit together rather neatly if you ask me.

Captain Dave, played hilariously by Dylan McDermott (pictured at top) is, much like most of the characters, less of a real person and more of an idea of one.  As our point of entry into the world of commercial airline pilots he plays like a sort of real-life Sterling Archer; his priorities are women and drinking, and for the most part he’s a good-looking, steely-eyed, kind of pathetic narcissist.  But he’s likable enough, and pretty good for a laugh.  Of all my least favorite things on LA to Vegas, he’s one of my least least favorite. 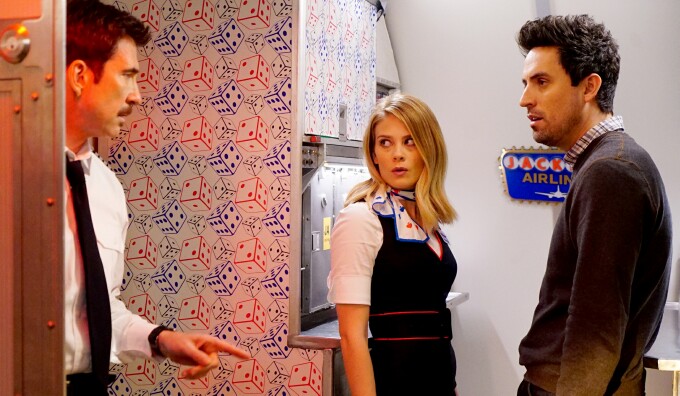 Ronnie, a flight attendant played by Kim Matula, is the show’s lead, and while she’s attractive, funny and able to sell being serious in the name of a bit, something just didn’t click right away.  After some deliberation, I figured it out: We were never properly introduced.  This is a self-proclaimed workplace comedy, meaning that on a very basic level it shares ground with shows like The Office, Superstore and Parks and Recreation.  The difference is that those shows took time to show us who we were dealing with and tell us why we should care.  Even 30 Rock, whose level of wacky most closely resembles the tone of LA to Vegas, made us like Liz Lemon before it showed her being a maniac.  When we met Ronnie, I had organic opportunities to criticize her choices before I ever knew who she was.  Why are you calling someone about another job, while on your way to your current job, for which you are already late?  Why did you make the call after you left the cab but before you had to run to your terminal, instead of while you were on the way?  Why are you late at all, Ronnie?  Don’t you do this like, every day?  (Matula is pictured above, center, with McDermott, left, and Ed Weeks.)

The supporting players are equally problematic.

Co-captain Alan, played by Amir Talai, comes off as sort of a wacky man-child, which is funny, but also silly enough that it needs to either be doubled down on or moved away from.

Bernard, played by Nathan Lee Graham, who should’ve been the ying to Ronnie’s yang, plays more like the ying to her ying.  Ronnie seems to be impulsive and short-sighted with a dash of irresponsible. Bernard should be her wise, yet hilarious opposite.  A lot of times he just seems like a bit player on a white version of Soul Plane. Something about some of Bernard’s bits just wasn’t working for me, and honestly, I don’t blame Graham for that because, as I’ve seen in the movie Zoolander, when given the right material he has genius comedic timing.  Effortless is the word I want to use here, but first I’d have to see less effort.

The same somewhat applies to Co-captain Alan, in that Talai played over-the-top so well in Harold and Kumar Escape from Guantanamo Bay, but something in his performance on LA to Vegas seems to be missing.

Ed Weeks, as Colin, also has that issue.  I’ve watched him straight up kill it on The Mindy Project for like five years, but his stereotypical know-it-all English professor shtick didn’t make me like him the way I assume the writers thought it would.  Colin feels to me like the most realistic of all the characters on the show, as if he’s a proxy for the audience, which is ironic because he hates that flight and almost all the people on it.  Food for thought, I guess.

Peter Stormare, a star of Starz’ wicked good American Gods, seems a little out of place initially as Artem, the two-bit superstitious gambler that this particular flight crew has come to know by name.  He’s generally in the same boat, er, plane, as Olivia Macklin’s stripper Nichole, a weekend pole warrior who uses the flight to recruit co-workers and hand out coupons.

LA to Vegas did grow on me quite a bit after the second and third episodes, but it wasn’t until I’d been given a chance to get to know the characters and find the heart of the show -- something not all viewers may have the patience to do.  These people are supposed to feel like a motley crew of strangers turned family by the adventures they share on this niche flight every week.

Instead, they feel like the people you meet in coach -- even if you enjoy their company for a few hours you’re happy to get away from them by flight’s end.  Here's hoping that changes.

LA to Vegas is telecast Tuesday at 9 p.m. ET on Fox.