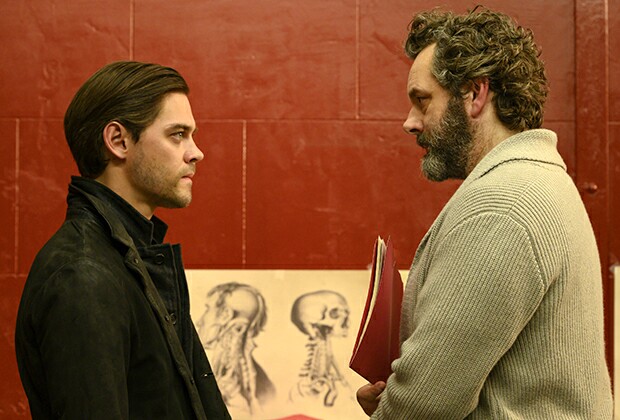 Created by Chris Fedak and Sam Sklaver, Prodigal Son is the newest crime drama on Fox’s primetime roster.  It stars Tom Payne, most recently known for his role as “Paul ‘Jesus’ Rovia” on The Walking Dead (what a difference a haircut and shave make, huh?), as Malcolm Bright – a brilliant but troubled criminal profiler with a past that the word "dark" doesn’t even begin to describe who uses his unique set of skills to assist the NYPD in solving murders.  Interesting as that sounds, if you’ve ever seen anything in the crime-based TV world (which is most of TV, honestly) you’ve probably seen or heard of something that is pretty similar to what I just described.  So, what, if anything, does Prodigal do to separate itself from the rest?  Well, in a Silence of the Lambs-like twist, Bright reluctantly ends up seeking help on a case from the one person who may be best equipped to provide said help: His father, convicted serial killer Martin Whitly, a.k.a. “The Surgeon.”  This may not sound like the hugest departure from what we’ve seen before, but in the case of this show’s foundational father/son dynamic, it makes all the difference in the world.

Dr. Whitly, played by the always fascinating Michael Sheen (pictured at top right, opposite Payne), was a loving father and husband who also turned out to be one of New York City’s most prolific murderers.  In response to that traumatic revelation, Malcolm, who was a child at the time, grew up to be an FBI Special Agent, only to be fired due to his semi-reckless behavior and blood relationship to his father.  Now, he works for the NYPD as a consultant, with a team consisting of two detectives -- JT (Frank Harts) and Dani (Aurora Perrineau) -- and their superior, Gil (Lou Diamond Phillips).

The semi-reckless behavior I’m referring to is on full display multiple times in the pilot alone.  (Caution: Spoilery details follow)  First, Bright very nonchalantly walks into some psycho’s murder-barn without any visual concern for his own safety.  Then, just about halfway through the episode, he does some quick thinking -- chopping off the hand of a man who was bound to a bomb-strapped chair -- that saves his and a victim’s lives, albeit in an extremely unconventional way.  The stress of that move alone sends homeboy into a midday night terror at the police station, which makes him unconsciously tackle Dani, almost getting him shot by some trigger-happy boys in blue.  Finally, at the end of the episode, he stops a killer by goading him into taking his life instead of Dani’s, something the killer definitely would have done, if not for Gil and JT’s last-minute arrival on the scene.  (You are now leaving the spoilery-details zone.)

On the surface this series is more or less what one would expect from a thriller, but at its core this story is more about Malcolm’s family than anything else.  His younger sister, Ainsley (great name), who’s played by The Orville’s Halston Sage, was too young to be affected by her father’s secret in the same way Malcolm has been.  Their mother, Jessica Whitly (played by Scandal’s Bellamy Young), is hell bent on keeping Malcolm as far from his pop as possible, which is probably for the best, given that Malcolm has nightly night terrors that are so intense he has to chain himself to bed and wear a mouth guard while sleeping (like I said up top, he’s “troubled”).  While Ainsley is supportive, Mama Whitly seems like she may have some secrets of her own.

Another upside to Prodigal is how it takes advantage of the inherent diversity that the setting of New York City offers.  Malcolm himself is a white male, as is his father, but Gil and JT are Latinx, and Dani is Latinx and female.  There’s also the Forensic Medical Examiner, Edrisa (played by Gilmore Girls’ Keiko Agena), who’s a Japanese-American female.

Diversity stuff aside though, I feel like Edrisa’s going to have a schoolgirl-type crush on Malcolm, and while typically I’d expect Dani’s character to be the one who eventually falls for Mr. Bright, I’m still all the way here for the possibility of he and Edrisa hooking up.

Let’s face it, though.  Much like the aforementioned classic Silence of the Lambs, the real meat and potatoes of this thing is, was, and always will be the relationship between Bright and his dear old dad.  Dr. Whitly, psychopathic as he may be, is still a genuine genius, and was actually a good dad, all things considered.  To boot, the man Michael Sheen delivers to us has an almost ever-pleasant demeanor, coupled with a truly delightful sense of humor.  The man has no qualms about who he really is and what he’s done.  His only true motivation, now that he’s been relegated to a cell with a short chain attaching him directly to the wall, is spending time with his son.  For some reason, and as crazy as he may be, when he says he just wants more time with his son, I believe him.  Whether or not that’s all he really wants has yet to be seen, but I’m confident our journey towards that answer will be an entertaining one, to say the least.

Payne does a great job of riding that line between “Don’t worry, you can trust him” and “Never mind, he’s nuts like we thought,” and that just so happens to be Prodigal Son’s sweet spot.  Add the gravitas that Bellamy and Phillips are capable of, the authenticity that Harts and Perrineau provide, and the manic yet pleasant levity that Sheen and Agena bring to the table, and this show will likely be increasing NYC's "fictional" crime rate for quite some time.

Prodigal Son is telecast Mondays at 9 p.m. on Fox.