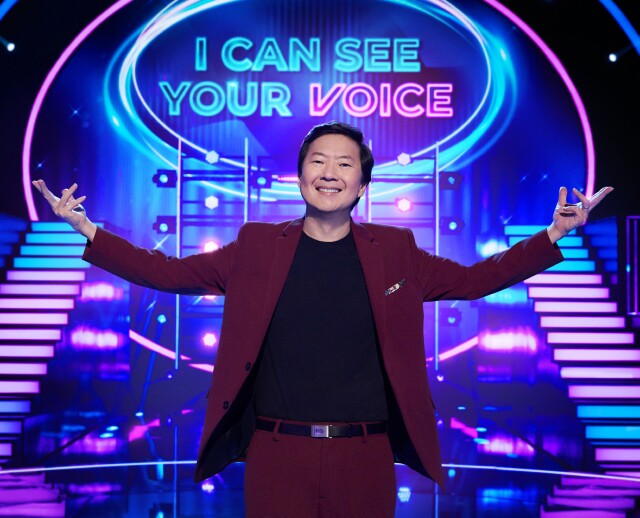 If you watch Fox at all, you must realize Ken Jeong is on -- a lot. A panelist on The Masked Singer, he’s also on the upcoming The Masked Dancer and is the host of I Can See Your Voice. Plus, he's co-hosting Fox's New Year's Eve celebration. Always quick with a joke, a recent hour-long exclusive interview with MediaVillage revealed an earnest thoughtfulness that's not always apparent when he's on stage.

"I never envisioned this whatsoever," Jeong said. "Fifteen years of my life in medicine culminating to this current point where I realized The Unicorn is Tori Spelling. I never thought it would get to that point, and yet here we are."

Jeong, though, is not just a panelist -- he's also played the games. For The Masked Singer and The Masked Dancer, Jeong slipped into complicated costumes to perform.

He went on The Ellen DeGeneres Show, as the purple fox, when she was doing segments called The Masked Dancer. "I worked with a choreographer about doing new dance moves I am not known for," he said. "I have four moves, and I beat them to death."

This Wednesday brings the season finale I Can See Your Voice, another show featuring some people who shouldn't lip-synch -- even in the shower. Still, Jeong manages to be kind and funny, even to those who assault the ears. That's how he rolls.

"He doesn't take himself seriously, and he still doesn't consider himself A-list or a star," says Yvette Nicole Brown, who worked with Jeong on Community. "He is self-deprecating to a fault. He will never push himself in front of someone else. It's almost like he doesn't see himself in the position he holds. He is still just a journeyman actor. In his mind, he is a working actor and a working standup, and that is just endearing. You can't help but love that."

Brown has been a guest on both of Jeong's singing shows during the pandemic.

"He is the kind of person who says, 'I need someone. I want it to be my friend,'" she says, explaining how his former co-stars wind up on his shows. "Any time Ken has called me, it was a 'yes.' We did the two episodes during COVID, and I said I will take these tests. He would not bring me anywhere that would cause me harm. He looks out for other people."

Knowing that Jeong is a physician helps. He keeps his medical license current and famously leaped off a stage during a stand-up act two years ago to help a woman in the audience who was having a seizure. The sold-out comedy club went silent, and an EMT in the audience also aided.

"It was frightening, but aspects of it were very inspiring, to see people work together for the sole purpose of helping someone get better," Jeong said. "It was one of the most surreal moments of my career for sure."

Admittedly, his career path is unusual. Jeong grew up in North Carolina, where his dad was an economics professor and his mom a business owner. He studied piano and violin and was talented enough to compete and to play in orchestras.

"I always envisioned a career in academics," he explained. "Show business was not even an interest of mine as a child. I was a pretty happy kid and tried to get along with everybody. It mimicked who I am now."

While studying zoology at Duke, Jeong took an acting class and immediately was torn. His father, always supportive, asked, "Do you really think a person of your look can survive in this business?"

And so Jeong went to UNC medical school. Comedy was relegated to monthly open mics. During his residency in New Orleans, he participated in the Big Easy Laff-Off. The prize? Performing at the Hollywood Improv. The judges were Improv founder Budd Friedman and NBC president Brandon Tartikoff. Jeong won.

"That was my entrance to LA," he said.

That's a golden ring few aspiring comedians could ignore. Jeong didn't, but he postponed comedy for a couple of years to finish his residency. Then he moved to L.A. and, for seven years, juggled being a doctor and a comedian.

He's played a doctor 11 times, which could be typecasting, but then again, he has also played a ballerina.

While Jeong has been cracking up audiences in The Hangover movies and Crazy Rich Asians, and guesting on dozens of sitcoms, he’s also faced one of the harshest facets of life. His wife, Tran Ho, also a physician, was diagnosed with a rare and aggressive breast cancer when their twins were one year old.

She's been cancer-free for 12 years. The experience, naturally, altered his perspective.

"There is just no guarantee of anything," Jeong noted. "You have to seize the moment when it is around because life is short. That has trickled down to my career. I have an ability I don't ever think I had. I am now a go-with-the-flow guy. When you have a career in medicine, you don't get there by being really laid back.

"To me, going through this pandemic reminds me in many ways of going through on a personal level what we went through with Tran and having no choice but to take things day by day," Jeong continued.

He doesn't miss a beat when citing his goals. Rather than respond with the usual choices of his second career -- directing, producing, starring -- his goal sounds much more like his first career.

"For everyone to get that COVID vaccine," Jeong said. "To me, there is nothing more important because that will reopen the economy. That will ease restrictions. Most importantly, it will save lives. What I really want is an effective vaccine that is distributable to all. It is the only way we can defeat this. I say that on the heels of two companies applying for FDA approval. I am an optimist."