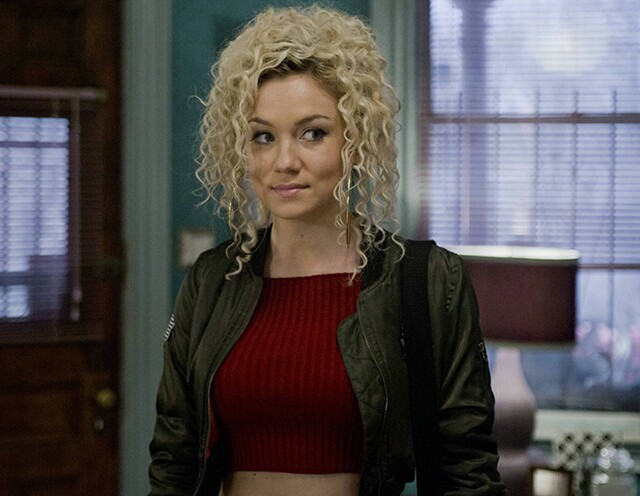 Upon my first viewing, the title character in Star initially came off, for lack of a better comparison, like a f**king sociopath, and as far as first impressions go, I don’t think that’s a stretch.  And yet I dig this chick. Stay with me here.

When we first meet her, Star thinks her life is kinda wack, even though she’s got the nicest clothes in what is obviously supposed to be “the hood” and has a nicer, pricier cell phone than I’ll ever own -- as evidenced by a throwaway remark her foster mother makes just a moment later.  Cut to the foster home kitchen, and our protagonist is told to do the dishes, a request that apparently was the very last straw for Ms. Thang. In response, she walks out claiming she going to have herself processed out of the system early. This is a goal she accomplishes, saving herself from the tyrannical reign of her dishwashing-obsessed captors. She also obtains the address of her kid sister Simone. (These two acts, according to the state employee Star is harassing, are respectively abnormal and illegal, the latter due to her having priors.)

Fast forward one last time, and we see Star enter Simone’s foster home unannounced and begin searching for her. (The law would call this breaking and entering.)  She finds her in a bedroom with her foster dad attempting to sexually assault her.  So, Star does what anyone would do in that situation – she stabs dude in the back with a kitchen knife.

As far as they know at this point, this guy’s dead, so Star tells Simone to grab her stuff, and then they just bounce. That just doesn’t seem very well thought out. Granted, Star was in panic mode, and her adrenaline was pumping just as anyone’s would in that situation, so I’ll give her a pass for being human. But, now that they think homeboy’s dead, why don’t they at least try to fool the impending authorities? I mean, they do absolutely nothing to make the scene less damning evidence-wise, or even attempt to leave some semblance of a misdirect that would even partially explain Simone’s absence.  Even if the police don’t come to the easy-to-reach conclusion that Star probably did it (see: the paperwork with her foster care release date, the state employee who admits aloud she could lose her job, etc.), they’re still going to assume that someone intentionally killed the guy and that Simone has run away with that person, which they would surmise from all the missing stuff Star told her to grab.

Remember, Star and Simone aren’t going into hiding. What they intend to accomplish is quite the opposite, obviously, because they want to get famous. Now, for the writers, I know the open-endedness of the situation is dramatic gold, but for Star’s character, that’s a whole lot to swallow in the first five minutes of meeting someone.

Putting the obvious legal implications aside just for a moment, I understand that these girls both have years of horrific, dialogue-referenced off-screen events under their belts, but without actually seeing any of it happen to Star, it gives the impression that she just bailed on people who, sure, were mean to her, but still housed and fed her for at least a year or two, and then had the audacity to tell her to do what? The dishes? The horror!

To this fictional woman’s credit, however, she is also dangerously ambitious, and independent in an indomitable fashion, but the main difference between her and the many all-too-familiar stereotypes she represents is the fact that she actually has the talent to back up all that bravado. She can sing, dance and has personality to boot.  But she hasn’t even hit her twenties, so even though her heart seems to be in the right place, she still hasn’t fully developed the gift of foresight -- hence the drama.

Star and Simone head to Atlanta in search of their godmother Carlotta Brown (Queen Latifah). Through the people-connecting magic of Instagram they meet up with Alexandra (Ryan Destiny), the wealthy daughter of fictional rock star Roland Crane (Lenny Kravitz), who is passionate about making “music that feeds my soul” -- without her father’s help or money. The three of them now share the same mission: Make it to the big time, no matter what.

As Star, Jude Demorest (pictured at top) does a bang up job of switching between sister-like playfulness, sexy mischief and being straight-up ratchet at a moment’s notice. Brittany O’Grady nails the nuances of being a sixteen-year-old who finds herself ignored and alone. Ryan Destiny is convincing as the no-nonsense, business minded one. Whether they’re having one of many friendship-ending fights or just chillin’ in the car, their conversations never seem phoned in. They really sell the idea that they’re just three young women chasing their dream together.

Starachieves a level of authenticity that makes it easy to buy into the messy drama of it all. If I didn’t believe Queen Latifah as the Christian mother-type with the constant urge to save her babies, or Brittany O’Grady as the angsty modern-day teen who has trouble processing her emotions, the whole thing would fall apart.

The show also addresses (or at least acknowledges) some social issues that have recently held the spotlight, including the Black Lives Matter movement, conflicting religious beliefs, sexual identity, drug and alcohol abuse, and child abuse in the foster care system. To his credit, Daniels manages to say a little something about each of these topics in one way or another without any of it coming off as even a little bit preachy.

Finally, the music on Star is fire. The regular soundtrack, particularly the club scenes, consists of tracks I’d actually bump, and the original music from the fictional trio is just as on point. They also do a great job of using the music in the proper contexts as opposed to just shoving it down our throats whenever they feel like it. At the right times, the music and visuals alone are capable of evoking more emotion than any of the dialogue. That makes Star shine all the brighter.