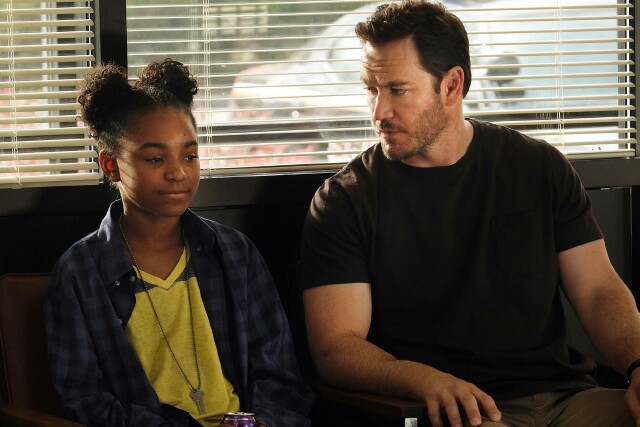 Broadcast television has a long history of filling network schedules with by-the-book police procedurals, conspiracy thrillers and cookie-cutter sitcoms.  It’s no wonder that viewers are flocking to streamers in search of series that are truly different and unique, telling stories that makes them think and feel something.  Fortunately, the broadcast networks are pushing back with shows that aren’t quite like any other.  The current best example is the Fox thriller The Passage.

Adapted from Justin Cronin’s best-selling novel The Passage, the first book in a popular trilogy, the series is led by showrunner and creator Liz Heldens (Friday Night Lights), who also serves as executive producer along with director Ridley Scott, writer/director Matt Reeves, David W. Zucker, Jason Ensler and Adam Kassan.  The story follows Dr. Lear (Henry Ian Cusick of Lost, another undeniably unique sci-fi drama that pushed the boundaries of broadcast television) and Dr. Tim Fanning (Jamie McShane), both in search of an urban legend that could lead them to the world’s greatest scientific discovery:  A cure that could make humans impervious to all known diseases.  Their mission is code-named Project Noah.  When Fanning is attacked and turned into a glowing-eyed, bloodsucking vampire, Lear and his team, led by Dr. Major Nichole Sykes (Caroline Chikezie), begin to experiment on death row inmates.  As the world teeters on the brink of a global pandemic, the CDC turns to Lear’s team for a cure, and they reluctantly decide to begin trials on children that could unlock the answers they need.

Brad Wolgast (Mark-Paul Gosselaar) is a hardened veteran and federal agent assigned by his former Special Ops partner Clark Richards (Vincent Piazza) to pick up Amy Bellafonte (Saniyya Sidney, pictured at top with Gosselaar).  She is a newly orphaned young girl with few if any friends that Project Noah has chosen as the child on whom they want to run tests.  When Wolgast grows attached to her and sees much of his own daughter in her, he goes rogue in order to protect Amy.  “It’s going to be okay, you understand?” he tells her.  “I’m not going to leave you.  I promise.”

In her narration, Amy says of that moment, “Of everything that happened, this is the part I think of the most.  Whatever was coming, we would face it together.”

One of the best narrative elements of The Passage is the bond shared between Brad and Amy, the dynamic they’ve found themselves in as a guardian and child, some would say as parent and child, especially considering a grieving Brad is still heartbroken over losing his only daughter.  During a special sneak peek screening of the first two episodes of The Passage at New York City’s NeueHouse, MediaVillage spoke with Gosselaar about the powerful dynamic between Brad and Amy.

“We had the luxury of creating our relationship in a linear fashion since all of our scenes were filmed sequentially, so our character meeting was our first day of filming together,” Gosselaar explained.  “That tentativeness she has with me, thinking ‘who the f*** are you?’ was very real,” he laughed.  “I was initially drawn to the series because of the genre aspect because I’d never done a genre piece in my career.  And then I saw that my character’s relationship with Amy was rooted in heart.  The heart and soul of the show is what people can do for others and for love.  It’s an interesting take as it’s not just a straight genre piece.  That’s what drew me right off the bat.”

The fright-factor horror of the series is more an unsettling thrill considering network shows are limited as to how much carnage they can display.  But that makes it a breath of fresh air in the otherwise super-saturated horror genre.  We get our first jolt when one of the building custodians, the jittery and self-kept Lawrence (Jason Fuchs), tells Dr. Lear that he’s seen the now-monstrous Dr. Fanning in his dreams.  Though Lear assures him it’s nothing, it’s obvious something is up when a romantic evening between Richards and Dr. Sykes is interrupted by viral inmate Shauna Babcock (Brianne Howey) in what viewers quickly learn was all a dream.

It’s taken up a notch when a pre-viral Project Noah volunteer encounters a terrifying Fanning who turns into a vampire before his very eyes -- until he wakes up from the dream.

Psychic vampires?  Count me in!

“As the series progresses, we delve into the backgrounds of all the characters,” Gosselaar said.  “We see why Carter was on death row, how Babcock made it to Project Noah.  We explore the friendship between Fanning and Lear, the relationship between Sykes and Richards, and then Wolgast and his ex-wife Lila [played by Emmanuelle Chriqui] and what happened to their daughter.  We dig into all of that.”

MediaVillage also spoke with star Caroline Chikezie, who plays Dr. Major Nichole Sykes.  “I can’t wait until viewers see what Nichole is willing to do to make sure that Amy is safe,” she said.  “Nichole is fearless and brave.  I love [her] because she’s a strong female and there aren’t many roles where it’s this badass, strong, smart woman who can take on the guys.  She’s gangster!”

While much of the adult cast shines, I have to commend breakout star Saniyya Sidney.  She plays the young heroine Amy with such gusto and strength and ferocity you’d think you were watching a seasoned veteran and not a twelve-year-old actor.  It isn’t just her fearlessness in the role, but her ability to portray such emotional vulnerability and at times true devastation, such as the impromptu memoriam she shares with Brad.  It’s a star-making, quality performance.

The Passage so far has expertly blended character-driven drama with pulse-pounding action and added a much-needed twist to the overpopulated horror genre by focusing on the characters, their stories and their intentions -- all the while increasing the representation of strong women and people of color onscreen.  If viewers don’t embrace it and the industry doesn’t support it they have only themselves to blame.

The Passage is telecast Mondays at 9 p.m. ET on Fox.