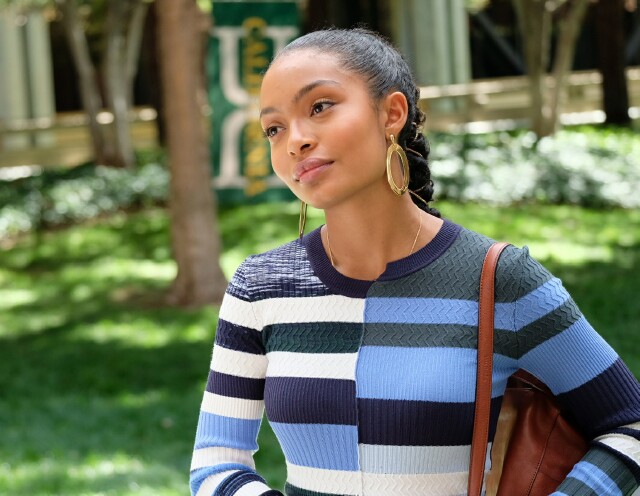 When I first heard about Freeform’s black-ish spinoff, grown-ish, I figured it’d be just that -- a by-the-numbers spinoff.  Like a single slice of pizza gone rogue, this creation from black-ish creator Kenya Barris and black-ish executive producer Larry Wilmore was supposed to be a smaller portion of exactly what we already knew and loved -- or so I thought.  What we got is an almost completely different beast, but it’s one that stands on its own a lot better than even its own pilot indicated at times.  Zoe Johnson (Yara Shahidi) has finally left the nest and now we’ll learn who she really is.  It feels like grown-ish is doing the same thing.

Obviously, a few things about grown-ish are pretty different right off the bat.  First, this show has an actual intro, theme song and all, as opposed to the “explanatory cold open followed by a quick title card” format usually leaned on by its predecessor.  Also, in this iteration of the black-ish brand I guess Zoe can see us now?  At the top of the pilot she straight up looks into the camera and explains what’s happening (like Ferris Bueller, or Saved By the Bell’s Zack Morris).  Even though Zoe doesn’t freeze time per se, whatever moment she’s in seems to continue perpetually while she talks to us, and no one ever notices. It’s a small but distinctive departure from the voiceover-driven narratives Anthony Anderson normally delivers.

The pilot, which feels more like a necessary evil than it does a prime example of the show’s potential, does a great job of establishing the inter-character bonds and basic information needed to follow the show, but it’s dedication to the not-so-subtle The Breakfast Club theme it pushes throughout the episode almost takes it off the rails.

The hysterical cameo from Dre (Anthony Anderson) aside, the bulk of the episode happens in a single classroom. Coincidentally, it’s the midnight Digital Marketing Strategies class that Zoe’s father Dre’s super-incompetent yet somehow dually employed co-worker Charlie (Deon Cole) teaches.  Charlie is as ridiculous as ever -- he’s trying to sell puppies (that might be baby wolves) to his students, and claims that the bulk of his curriculum will revolve around drones because, as he puts it, they arouse him -- and of course, all this works.  Charlie is a hilariously over-the-top character, and those kinds of shenanigans are right up his alley.

Trevor Jackson as Aaron -- who has great comedic timing, by the way -- actually first appeared on what I’d call the unofficial grown-ish pilot, Episode 23 of the third season of black-ish titled “Liberal Arts.”  In that episode, Dre drops Zoe off for her two-day orientation, allowing us an organic opportunity to take a solo Zoe-centric narrative for a test drive.  This is also where we’re introduced to the concept of Charlie as a professor, and to Dean Parker (Chris Parnell’s so far under-utilized character on grown-ish).

The main issue with the first episode is the problem with most pilots -- there was a huge amount of exposition.  Combine that with a camera style that differs just enough from the familiar one black-ish uses that you’d notice, and the claustrophobic, almost bottle episode-like feeling that the classroom setting gives off and one could be in big trouble.  At that point, the show’s saving grace -- besides our implied knowledge of Zoe’s personality based on her home life over on black-ish – is the second episode.  By that point the table has been set, we all know who sits where, and we can finally focus on the real reason we even showed up: to eat.

In this series, which is more of a dramedy than a sitcom with embedded black history lessons, Barris and Wilmore used what feels like “a dash of black-ish” to help fans of the original make the move to the new show.  Good intentions aside, I feel like it took away from the show’s individuality more than they intended, mainly because it muddied the vibe a bit.  However, this does get corrected by episode two, because now instead of saying, “You guys remember black-ish, right?” they’re saying, “This is really what this show is.”

So what is this show?  It’s a decidedly more adult take on Zoe’s character.  The vibe I got when grown-ish finally got down to business was one that more closely resembled another Freeform show, The Bold Type.  In black-ish, all cusses are bleeped.  In grown-ish they only bleep the f-bombs.  In black-ish, drugs are talked about, but never seen or used.  In grown-ish, people definitely do drugs.  (I mean, this is college, right?)  Plus, there are slightly more present sexual undertones, which obviously differs from the played down “Mom and Dad are in bed with head-to-toe pajamas” kind of sexuality exhibited on the more family friendly stuff.  This is an opportunity for Zoe to be a voice through which the Millennial generation she represents can speak on topics that affect people their age, and with a show that’s as thematically solid as this one, tackling the right social and political issues in an entertaining way shouldn’t be a problem.  (All the episodes are cleverly hip-hop or R&B related: Episode 1, titled “Late Registration,” is a Kanye album; Episode 2, “Bitch, Don’t Kill My Vibe,” is a Kendrick Lamar song.)

As different as grown-ish is, I’m happy we got something that chose to do its own thing instead of being the mini black-ish it would have been so easy for the network to dump on us.  Kenya Barris, Larry Wilmore and everyone else involved should be proud-ish.