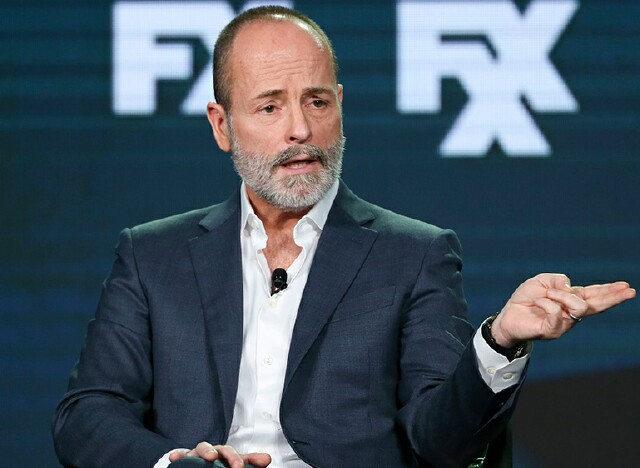 Pasadena, CA:  As the Winter 2019 Television Critics Association tour approached its midpoint, FX once again emerged as the best in show, taking full advantage not only of its designated day in the tour but the day before, as well, to promote its upcoming new and returning programming.

Super Bowl Sunday happened to be the day before FX’s formal presentations.  Even though the Bowl was on CBS, FX -- under the auspices of the very smart publicity executive John Solberg – took over one of the Langham Huntington’s massive ballrooms, installed a high-definition screen roughly the size of the hotel’s average guest room, and tossed a casual viewing party with hot dogs, burgers, beer and more.  When that ended, everyone stayed where they were (on one of the comfortable couches or chairs that were positioned around the room for the big game) to view the first episode of the network’s upcoming limited series Fosse/Verdon (a cinematic gem not unlike FX’s previous limited series Feud, The People v O.J. Simpson and The Assassination of Gianni Versace), featuring mesmerizing performances by Sam Rockwell as Bob Fosse and Michelle Williams as Gwen Verdon.  Executive producer and director Thomas Kail (who directed a little Broadway show called Hamilton) and executive producer and writer Steven Levensen (who wrote Dear Evan Hansen) were on hand to introduce the screening and provide background.  So was creative consultant Nicole Fosse, daughter of Fosse and Verdon.

After Fosse/Verdon was finished FX screened the first two episodes of its macabre new horror comedy What We Do in the Shadows, a show unlike any that has ever been on American television, and an uproarious one at that.  Set to debut in March, though seemingly more suited for the fall, Shadows was goofy good fun.

Together, FX’s efforts on Sunday afternoon and evening both to reinforce its publicity team’s connection to the press (something most networks no longer nurture) and establish Fosse/Verdon and Shadows as new series to watch represented a greater and/or more effective presence at TCA so far than virtually any other network.  As more than one critic said that day, “FX gets it.”

The following day was FX’s official day here, and the press was prepped for panels with the casts and creators of both programs that filled the morning – after the eagerly awaited press conference with John Landgraf, the CEO of FX Networks and FX Productions.  His appearances are often the highlights of the summer and winter tours.

He didn’t have very much to say about the impending Disney takeover of FX Networks (along with other assets of 20th Century Fox).  Disney Chairman and CEO Bob Iger “has stated publicly that the acquisition of FX will not change the FX brand,” he said.  “He has also indicated that he would like FX as well as many other creative brands at Disney to increase our output in support of their streaming strategy. Our industry has undergone rapid and seismic shifts, and every media company must evolve and grow to compete with the rising monopolistic tightness of Silicon Valley and what I have labeled their endless money cannons.”  That was the beginning of the consistent shade Landgraf threw at Silicon Valley, though it was Netflix about which he had the most to say.

Last year, he said, Netflix, offered what he called “an insane” 530 original programs.  He would later say, “I don’t know who needs 530 original television programs in a year, but I’ll leave that to others to judge.”

But the real fire was directed toward the streamer’s recent performance claims.  “Netflix has selectively begun to release some viewership numbers for a few of their successful original programs,” he said, noting that the “source of those numbers” is Netflix itself.  “And what do you know?” he continued as reporters chuckled.  “The numbers look really big and promote the notion that many shows on their platform are gigantic hits that are watched more than shows on broadcast, premium, or basic cable.

“A few weeks ago, Netflix stated, and I quote, ‘We are very pleased with our launch of [the former Lifetime thriller] You.  We estimate it will be watched by over 40 million-member households in its first four weeks on Netflix.’  Sounds like they have a huge hit on their hands.  However, if you dig a little deeper, Netflix is not telling you the whole story, because the numbers they issued do not follow the universally understood television metric, which is ‘average audience.’

“Anyone who read Netflix’s statement about You would likely assume they were giving an average audience number because that is how scripted television has always been measured.  They would simply think, ‘40 million households are watching You? It must be the biggest hit on TV!’  Subsequently, Netflix clarified this statement by adding that their ‘watched by’ meant that an individual Netflix account watched at least 70 percent of one of You‘s ten episodes.

“Using the traditional measurement metric of average audience, which is calculated by adding up every minute viewed of an episode or season and dividing it by the total duration of the program, the first season of You on Netflix actually averaged, in its first four weeks (in the U.S.), one fifth of what Netflix’s number implies, or about 8 million average U.S. viewers per episode.  An average audience of 8 million viewers is good, but it’s not an average audience of 40 million total viewers, which would make You the No. 1 show on American television.”

Is everything Netflix reports about the performances of its shows an exaggeration?  “Stranger Things is absolutely a home run, but it is also a huge outlier on the Netflix platform, just as Game of Thrones is on HBO and The Walking Dead has been on AMC,” Landgraf asserted.  “The flip side of taking hundreds of at bats is you’re also going to get a massive number of strikeouts.  Naturally, Netflix has also made and launched a multitude of consumer failures.  But by reporting their singles as if they were home runs and failing to ever report a single strikeout, they undercut an accurate perception of their batting average and misrepresent the number and scale of their hits.  There are decades of historical data to prove that creative and commercial failure in this business is unavoidable and no one is exempt from that reality.  When applying our industry’s standard, accepted metrics to all their programming, the list of shows on their platform that would be considered commercial failures is long, and their true batting average would be viewed as unimpressive.”

FX rounded out its engaging and enlightening day with panels for the returning comedy Better Things and science-fiction drama Legion, as well as its unscripted docuseries The Weekly, featuring New York Times reporters and correspondents on the job developing stories.  The day ended with a cocktail reception with a vampire theme, again promoting What We Do in the Shadows.