FX at TCA:  Make Way for the Women of “Mrs. America” 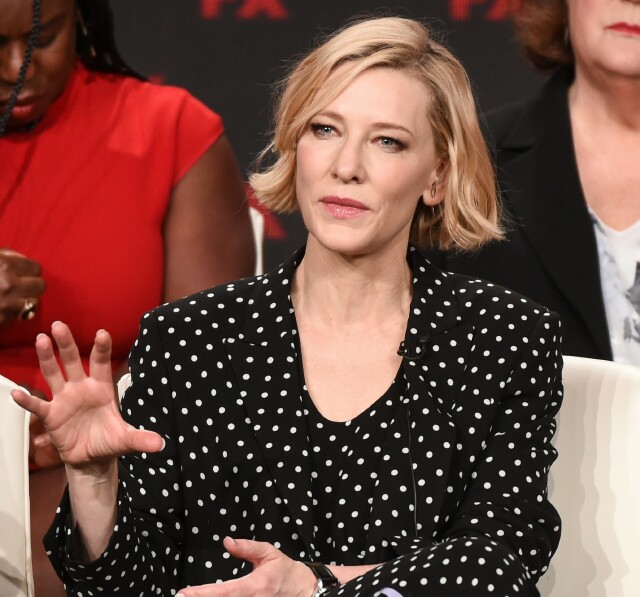 Pasadena, CA -- We’re past the halfway mark of the Winter 2020 Television Critics Association tour, with panels for dozens of shows behind us, and so far the program that has stood out to me above the rest is the upcoming limited series Mrs. America, which will debut in April on FX on Hulu.  We have many sessions for many more cable and streaming series to come in the days ahead, but at this point I’m comfortable declaring that this show will be one of the best of the year and will dominate the 2020 Emmys and the 2021 awards season.  The Mrs. America panel has certainly been the most engrossing to date at the tour.  The series is set in the ‘70s, and it tells the story of the movement to ratify the Equal Rights Amendment and the combustive efforts of conservative activist Phyllis Schlafly to prevent that from happening.  Schlafly is likely long forgotten or not at all known, depending on one’s generation, but her story nevertheless reflects the volatility surrounding certain women’s issues in society today. 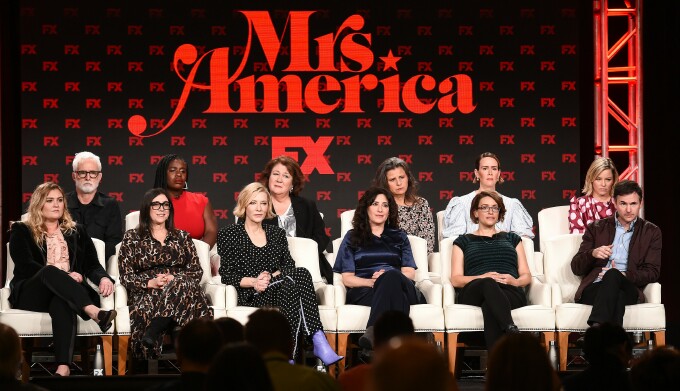 Blanchett proved to be so well versed on Schlafly, the ERA and related topics she could likely lecture on those subjects at universities across the country.  “Phyllis herself didn’t initially have an issue with the Equal Rights Amendment,” she said when asked how the real-life events depicted in the series came about.  “She thought it was a piece of fairly innocuous political business, and her primary focus was defense.  That was her passion.  That was her area of research and her focus.  It wasn’t really until her friend Alice turned her on to what were called the dangers of the ERA, which meant that women could be drafted.  She saw that it would dilute the military of its strength, and then she started to forge a link in her mind between the ERA and the move towards communism.”

“Phyllis had a network of supporters from the late ‘60s when she built her base,” added Waller.  “She had this newsletter, The Phyllis Schlafly Report, that she’d been sending out for years.  When she became interested in the ERA campaign, all she had to do was send out an article in her newsletter to her thousands of subscribers, and it was like a light switch was turned on. I call her the original disruptor.  She was an incredibly effective grassroots organizer, and she was able to mobilize women.  That was her superpower.”

While the other female leads in the production are playing real-life characters, Sarah Paulson portrays a fictional person named Alice McCray, who is intended to represent the many women who supported Schlafly in her campaign to block the ERA.  “Alice is a devout Catholic and a very dedicated homemaker,” Paulson said, noting that she took the role because she wanted to see what it would be like for a person whose entire world consisted of her family and their home life “to feel that somehow she didn’t matter because her desire was to be in her home and to support her husband, and to raise her children.  [Alice thinks she is] being devalued by this movement.  It’s very scary for her.”

One critic noted that Phyllis does not necessarily come off as a villain in the series.

“I don’t think we benefit from painting the other side, the side that we don’t agree with, as monsters,” Waller explained.  “And I don’t think there is any benefit to portraying heroes as perfect.  What really struck me about all the women from this period was how messy they were.  They’re complex.  They’re contradictory in nature.  They quarrel.  There’s joy, there’s love, and there’s hate.

“One of the great things about this period is you have the birth of a lot of things, including intersectional feminism and LGBTQ rights,” she continued.  “These are stories that are often painted in broad strokes because they’re not the centerpiece of political dramas, and I wanted to bring them to the forefront.  In episode three, Shirley Chisholm is really the beginning of the birth of intersectional feminism, and it’s a messy beginning.  I think the women’s movement was really growing in this time period and learning lessons.”

“It was wonderful to have a character like Shirley be a part of the story, because her very effective role and presence in that period was incredibly powerful for all women, and of course powerful for women of color,” Aduba said.  “Over the years we’ve glossed over some of those intersectional figures and their importance and their relevance in the story, and I think it was great that we were able to include them and right that historical wrong in our cultural atmosphere.”

“Phyllis was profoundly influential,” Blanchett said.  “I was gob-smacked by her ability to inspire and galvanize and mobilize people, through various different tactics [that] some would call dubious.  Some might celebrate them.  It was a steep learning curve for me.  She was a true alpha and absolutely a force of nature.”

“Hopefully we can drive people who might think this is about the feminist movement, but Dahvi, in a very intelligent way, started deliberately with the Schlaflys to say that there were actually two women’s movements in the ’70s,” she noted.  “There was the feminist women’s movement and the conservative women’s movement.  It allows the audience to see not only the points of disconnect and how polarized and how separate they were, but the point of intersection they had.  The fact [is] Bella Abzug and Phyllis Schlafly ran for Congress in the same year with the same slogan, ‘A women’s place is in the House.’  The House of Representatives.  Bella won.”

Asked what she would like people who don’t know anything about the time period to take away from the series, Blanchett replied, “I’m a passionate lover of history.  I don’t think we can in any way understand the present unless we look to the past, and really, we often just don’t learn very much and just make the same mistakes.  It seemed with every passing day in the development process, and certainly through shooting, and having the ERA [debate] right now, that it became increasingly relevant.”