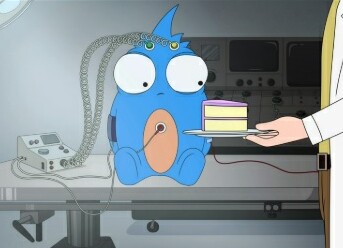 At first glance, FXX’s Cake looks like the kind of trip one might pay a street pharmacist top dollar for the privilege of experiencing.  There’s psychedelic imagery, bright colors and hilarious jokes wrapped in abstract visual concepts.  Beyond that entertaining aesthetic, though, is a collection of surprisingly honest and raw material.  Featuring both live-action and various types of animation, Cake is a showcase of comedic talent from a variety of sources and has the feel of a curated YouTube playlist.  Much like how an actual cake is constructed and consumed, each of these bite-sized shorts are available as individual “slices” on FXNOW, as well as part of the collective weekly showcase telecast every Wednesday night, but do these pieces work better as individual snacks or as part of the whole pastry?

If you’ve yet to taste this particular delicacy, be warned: I’m about to spoil the hell out of it.  The first episode of Cake opens with a short called “Quarter Life Poetry” which was created, written by, and stars Samantha Jayne.  “QLP” is a music video about a 20-something woman who hates to go out but loves to look like she loves going out on social media (so, a Millennial, basically?).  At least that was my takeaway.  Admittedly, I wasn’t initially too blown away by this one.  I didn’t personally relate to her situation, and it reminded me a lot of the storytelling joke-rap stylings of artists like Lil Dicky or The Lonely Island, minus the over-the-top premises and actual rapping.  In all fairness, though, it was beautifully shot, Jayne’s performance was solid, and it is titled “Quarter Life Poetry,” not “Quarter Life Rap Songs.”  It is, however, more like spoken word storytelling over a beat (so, a musical, basically?).  Maybe it's not for me, but I can absolutely imagine Millennial white women loving this.

A fave of mine from the episode was “Drifters” created by Gustaf Lindström.  Set in a microscopic world, it’s a short bit about two sea planktons having a rather human conversation about a date that the female plankton went on.  On the surface it was filled with references and in-jokes that were very plankton-specific, but overall the whole scene was somehow relatable to all.  Regardless of species, this was no different than listening to a hilarious conversation two strangers are having next to you at a bar.  I may not be able to relate to how funny the way someone “squirts out their digestive tract” might be, but I can definitely connect with the concept of clowning a close friend’s romantic prospects.  The icing on this particular slice of cake?  The visuals.  I didn’t really know what sea plankton looked like up close before, but I’m pretty sure this is a great representation.  All that, plus the attention to detail -- like the way the depth of field shifts in focus just as it would if the camera were realistically focusing on something that small -- made “Drifters” one of the true standouts in this first episode.

There are a number of shorts interstitially spaced throughout the show’s runtime, but if we’re talking stand outs, the most hilarious set of clips was from “Oh Jerome, No” created by Alex Karpovsky and Teddy Blanks.  It follows Jerome (Mamoudou Athie) on his search for love as he realizes he may be a little too emotional.  In an effort to toughen up, he ends up in an anti-feelings support group, and tries committing to a life of feelings-free toughness.  These shorts felt the most like an actual TV show, as opposed to thematically linked clips, and the bits in this short were my favorite kind of ridiculous.  Between the New York City location and the exaggerated behavior of other characters (and Natasha Leone’s guest appearance), it felt kind of Broad City-ish, in the best possible way.

The thing about “Oh Jerome, No” is that ever-important emotional honesty I’m always talking about.  It’s the same reason that I have such a fond opinion of “Drifters.”  Regardless of premise, if there’s a universal human truth to whatever you’re slangin’ my way, I’m more likely to willingly partake.  Jerome’s problem, like that of the tough chick he ends up on a date with, is that of jaded cynicism.  Being his emotional self hasn’t been working for him, and his frustration has finally led to the extremes of completely changing who he is.  This is expressed perfectly by Leone’s character, Gretchen, in the second act of Jerome’s story.  She says, “Love is fleeting, not unique at all.  Sadness is boring.  Happiness is a capitalist lie.  Why bother with any of it?” You’re preaching to the choir, sis.

All in all, I’d say the big thing working in Cake’s favor is its curation-based format.  It allows the show runners to have any number of writers, directors, animators and performers all producing material at any given time and based on ratings and what not they could adjust the roster every season.  I wouldn’t be surprised if this ended being something of a testing ground for new material, like a showcase of mini-pilots, all fighting each other to become a real boy, so to speak, while simultaneously working together to make Cake the kind of show no one ever regrets watching.  Either way, if they keep bringing the funny the way that they have been, I’ll gladly be back for another slice.