FXX's "Dave" Shows Us How Dope the World Can Be 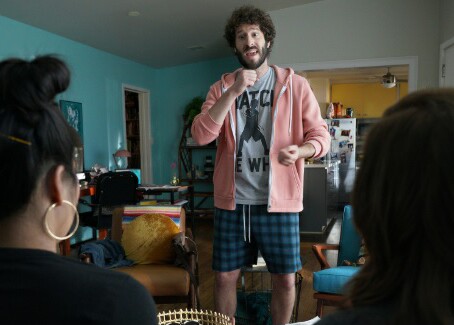 You know, there was once a time in America when the idea of creating an entire TV show about an up-and-coming rapper named “Lil Dicky” would’ve sounded preposterous. Then again, there was a time when the sentence “that guy from The Apprentice is the President now” wouldn’t have made any sense either, but that’s just life, I guess -- full of surprises.  Fortunately, one of FXX’s newest comedies, Dave, is the good kind of surprising.  Starring actual rapper Lil Dicky -- real name David Burd -- as the title character, co-created by Burd and Jeff Schaffer, and executive produced by the both of them, as well as Kevin Hart, Greg Mottola and Scooter Braun (among a few others), Dave just so happens to be the wave right now.  It’s funny as hell, drips with heart, has dope cameos to boot, and to top it all off, Dicky’s got bars.  This might just be the thing that reminds us how dope the world can be. Or, at the very least, it’ll help us forget how sh*tty it’s gotten.

On the surface, Dave’s on-screen story isn’t much different than what you’d expect.   Dave is a rapper who goes by the stage name Lil Dicky.  His raps and alias fit the satirical nature of his overall persona, which itself is a comment on the stereotypically aggressive and sexual nature of hardcore hip-hop and modern day trap-type music, or as he puts it in the show, “a super-intellectual commentary on hyper masculinity.”  He’s got a group of close friends, which includes his girlfriend, Ally (Taylor Misiak), his childhood friend/engineer Elz (Travis “Taco” Bennet of Odd Future fame), his roommate and eventual manager, Mike (Andrew Santino), and his hype man, Gata, all of whom more or less support his dream of becoming the world’s greatest rapper.  The only thing stopping him is … well, nothing.  (I’ll get to that.) 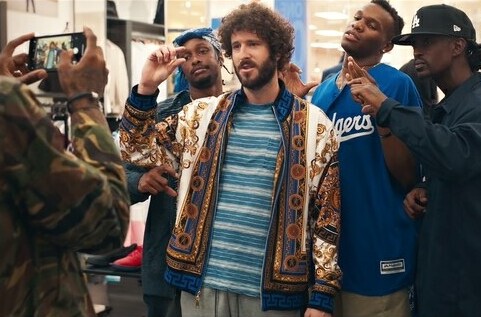 See, rappers playing some version of themselves at some point in their respective lives goes all the way back to Fresh Prince of Bel Air.  More recently we’ve seen Awkwafina do it in Awkwafina is Nora from Queens, and a couple years ago rapper Kyle (or “Drake Lite” as I like to refer to him) starred in a Netflix movie called The After Party that wasn’t technically about his life, but was close enough.  In Fresh Prince, Will Smith played a pre-rap money version of himself that would never see even a fraction of the professional success that real-life Will saw.  Same thing goes for Awkwafina, who also plays a pre-fame version of herself that’s displayed literally none of the musical or acting talent that her real-life persona would eventually build a career on.  Dave, on the other and, has simply turned back the clock, so to speak.

Dave’sDave is definitely a representation of an actual time in Dicky’s life, but it’s also filtered through the supposed ridiculousness of his professional endeavors.  Of course, he doesn’t fit the “understood” bill rap-wise.  He’s white, Jewish, from the suburbs, and his rap name is a literal joke.  These are things that seem like potential hurdles for Dave, and in pretty much every episode they are, but the difference is that he can actually rap his ass off.  His talents prevail in the end, or at least they feel like they will.

When not focused on Dicky’s professional, ahem, rise, each episode defaults to subject matter that’s usually surprisingly personal and emotionally honest.  Besides all the insecurity that Dave feels about his rap hurdles, he also deals with the anxieties of real life.  So far, issues like grief, sex and mental health have been dealt with in a way that felt really genuine and endearing, and they’ve done so without getting so heavy that it sucked the fun out of whatever episode that dealt with them.  Specifically, episodes three and five, titled “Hypospadias” and “Hype Man,” respectively, put the show’s true emotional maturity on display, which is an epic feat considering how silly most of the show’s content is.  I mean, in the show Dicky’s hit single is called, “My Dick Sucks.”  Doesn’t get any sillier than that.

All silliness aside, it’s Dave’s innate authenticity that pushes it over the edge.  Gata is actually Dave’s real-life confidant both on and offstage, and like his character on the show claims, he really has worked with artists like Lil Wayne and Tyga.  Mike is based on a real dude, Mike Hertz, who manages both Dicky and Gata.  Add to that cameos from legit rappers like YG, Young Thug and Trippie Redd, along with his Curb Your Enthusiasm-style observations and general Millennial anxieties, and the result is a very relatable and fun experience, with the perfect soundtrack to match.

At the end of the day, is Dave revolutionizing the visual feel and format of the modern-day sitcom?  Not really, but it’s got a similar style and cadence to that of Nora and Broad City,which is more than enough.

Dave is telecast Wednesday at 10 p.m. on FXX.