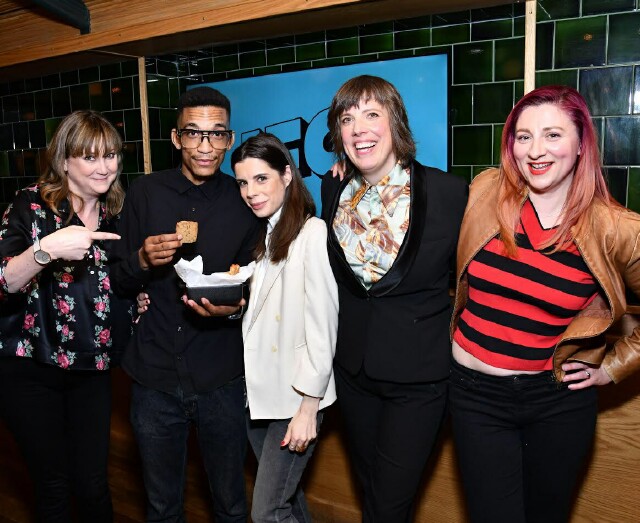 Earlier this year, during the last week of March, I found myself in one of Manhattan’s swankiest restaurants: Upland NYC.  The very smart publicity chief at IFC had set a handful of critics up with a chance to preview some of their upcoming content -- all this during what was arguably the best lunch I’d ever had in New York City.  The TV gods had smiled upon me that fateful afternoon, as evidenced by the sole responsibility with which I’d been charged; I was to interview the Canadian goddesses of sketch comedy -- the artists currently known as Baroness von Sketch.  I made my way to a table where I sat with IFC’s four latest imports (pictured with me at top, left to right) -- Jennifer Whelan, Meredith MacNeil, Carolyn Taylor and Aurora Brown.  As a huge fan of these women and what they contribute to the comedy world, I was nervous as all hell.  “A joke will break the ice for sure,” I thought.  So, I went for it, and it worked, and I later learned that, having only known me by my name, when they read my earlier review of their show they had assumed I was a woman.  It was a love thing.

Ainsley Andrade:  So, my first question is the one that everybody’s really been wanting to know.

Ainsley:  No, that’s not it.  When you guys first started working together, how long did it take for all of your cycles to sync up?

All four Baronesses(laughing and over-talking):  We talked about that!

Ainsley:  Did it really happen?  I didn’t expect to land an actual answer.

Meredith:  We talked about this because 90% of our writing room is normally women.

Carolyn:  We had a big thing of tampons like, on the table for a while.  Just like, take one!  Free!  You know, we supplied them for our writers.

Meredith:  We thought at some point, because some of our staff writers are there with us the whole time, we were like, “We’re definitely all going to sync up, we have to be prepared.”

Ainsley:  Do you think the work you have done would be any different if you had met sooner?

Aurora:  I envy people who know what they want to say when they’re in their early twenties, but once I hit 40 I was like, I do know what I’m talking about, and I know what I want to talk about.  And I’m better, personally.  I’m a better performer, I’m a better writer.  I’m just ready to do all those things in a way that I think I would’ve been too scattered to do when I was in my twenties.

Jennifer:  Yeah, like, in your twenties everything is dramatic because it’s new.  Ya know?  So your break up is dramatic, your job is dramatic, your apartments are just dramatic, but when you’re in your forties you’ve done it enough times [that] it’s like [how] somebody who’s gone on the same rollercoaster a bunch of times says, “Oh, I know this is the part where we’re going to get ready to scream, this is the part where it’s fun.  I think that turning 40 I was like, I know what I want to say, but [the] culture does not want me to say it anymore.  This is a great opportunity to be able to say that thing.

Ainsley:  I recently read that in sketch comedy it’s hard to be successful unless you’re aiming at a specific demographic.  In sketch you’re always sort of finding a specific niche and latching on to that because you are kind of competing with SNL, Key & Peele, etc.  Is that something you guys feel like you did consciously?

Meredith:  We were all so like-minded when we all met.  We had such a clear vision of things that bothered us [that] we wanted to talk about; things that made us laugh.  For me, and I think for the group, I’d been around the block [a couple times] so I wasn’t looking outward.  My energy was really focused on these three, and we did a lot of talking and talking about different things.  It’s observational comedy.  In its own way, because we were 40-year-old women making comedy together, it was rare enough that I wasn’t looking outward.

Carolyn: It didn’t feel competitive.  It didn’t feel like, “Shit! We’ve got to be funnier than ‘X’ or have to be smarter than ‘Y’ or we have to beat so and so to the such and such.” That may sound idealistic and odd but we really were in our own bubble of creation.  It didn’t feel in any way that we were competing with anybody; we were just trying to create the best thing that we could.  Now we might be, have been, responding to some other comedy that was out there and going, “Oh, that’s not us” and “Oh, we don’t want to do that, but with full respect, just saying, that’s your brand.”

Jennifer:  I didn’t see on television women as I knew them to be.  You know, they were the girlfriend, [and] especially when you’re in your forties they were the moms.  I know a lot of my friends were saying, “Everything I audition for is like ‘Bring in a plate of sandwiches and say ‘Is anybody hungry?’ and that’s all I do.”  All the women I know are so interesting, they’re so funny, and I just don’t see that, and I want to see that.  I felt like, we can’t be the only ones.  If we’re so thirsty for this, other women must be sooo thirsty for this.

Aurora: I don’t think our demographic has been exhausted by exposure, you know? (everybody laughs)

Aurora:  It’s a really underserved demographic.  I think that anytime somebody makes a really specific work of art that’s really true to their experience with a lot of care and a lot of skill, of course it speaks to women our age, but I‘ve had women in their twenties, I’ve had men who were in their late sixties come up and say they love the show.  Like, the more specific it is, the more universal it gets.

Meredith:  People, as you know, are attracted to the truth.  That was one of the themes in the show.  Especially now, politically, in all countries the truth is extremely attractive, and that’s something we all really wanted to do.  Even now, I’ll write a sketch with these amazing women and sometimes I’ll do eight passes on it.  Like, “Well, what’s the truth of it?  Are you covering it up too much?  What’s the truth?  I still think we constantly go back to that.

Ainsley:  Is it safe to assume that you’re mining your own life experiences?

Meredith:  Yeah, and as the years go on, I’ve been quite protective, as have we all, about certain things or areas that we don’t share.  Every year I’ll try [to] mine a little bit more, and I find that exciting [and] weird.  If you are careful with what you mine, you can have that kind of conversation, back and forth.  I mean, I know it’s not live theater, but there’s something in it where I feel like our audience is talking to us, and we’re talking back to them.

Aurora:  There’s always a place for the surreal, weirdo kind of stuff, which is great, but if you’re doing a comedy that says, “We’re all like this, right?” then it’s this relief for people. There’s a relief when they laugh.  It’s like “Oh God, I’m not the only one!”

Carolyn:  A lot of the situations we put ourselves in we would never say are universal because, you know --

Carolyn:  But we’re satirizing the interpersonal dynamic.  Like that person who’s telling you what to do, or that rivalry with a sibling, so all the circumstances around that might be specific to us -- four women in their forties, living in Toronto, etc. -– but the truth of the interpersonal dynamic and the relationship is universal in that if someone bugs you or someone needs to be right, I think that must happen around the globe, right?  Those are the truths.

Meredith:  Just to be clear, when we were saying that we weren’t comparing ourselves to any other show … We are always inspired by the women that came before us.  We’re aware that this door of comedy was kicked open a long time ago, and we’re just so, like, “Thank you” for that!  In our first season, we had a lot of writers that never wrote for television before.  They came from different backgrounds.  It was interesting.

Ainsley:  Do you feel like that was a better scenario?  To have people who hadn’t done television before?

Carolyn:  For sure, because then you don’t have a specific way of believing it has to be done.  You can be trained a certain way and think, “Oh it always has to go with a beginning, middle and end this way” or a joke has to evolve in a certain way, and we weren’t interested in that.  It was like, let’s go into the truth, let’s examine how we’re going to develop the structure of a scene, but let’s not go in with preconceived notions of how it has to be.  Then you bring in someone who’s like an academic, a PhD candidate, and a novelist, and a graphic artist, and they’re going to bring their life experience, and maybe we help each other with our relative levels of experience as far as structure goes, but the ideas then become fresh and are not recycled comedy ideas.  Hopefully.

A closing thought from me:  The ethos of Baroness von Sketch’s comedy is how the universal truths they’ve mined out of their personal experiences can connect with almost everyone, regardless of race, gender, sexual preference, religion or location.  I’ve seen plenty of sketch comedy, but for me -- a mixed-race New Yorker barely out of his twenties -- to be able to relate on such a deep level to the comedic stylings of “four women in their forties, living in Toronto” says a lot about these four professionals and the endless reservoirs of talent, introspection and perspective that each carries around.  Brava, ladies!

Now in its third season, Baroness von Sketch is telecast Thursday at 10 p.m. on IFC.