With "Ghostbusters" Women Take the Lead at the Movies 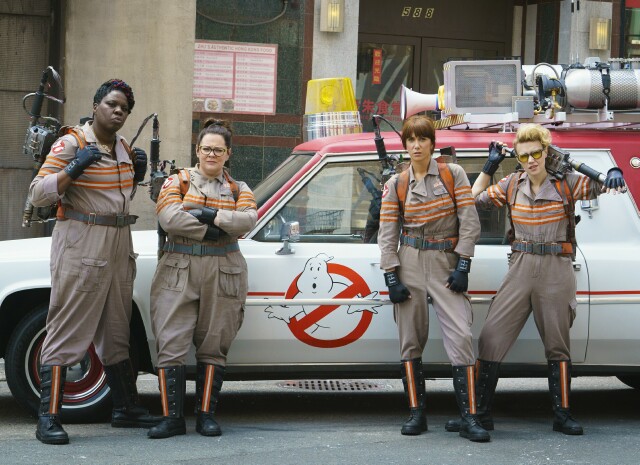 It has been 30 years since “Ghostbusters” hit it big and became a beloved, all-time classic.  But when a re-imagined “Ghostbusters” opens on July 15, it won’t feature the same guys -- or any guys for that matter -- putting on the proton packs to save the world.  A movie re-do with a gender swap would be newsworthy for any film, but for one as iconic as “Ghostbusters”?  To say this is an important milestone would be an understatement, and it deserves a cinematic slow clap for its boldness and all-star female cast including (left to right at top) Leslie Jones, Melissa McCarthy, Kristin Wiig and Kate McKinnon.

But with women buying 50% of all movie tickets in the U.S. last year according to the MPAA, I’m happy to say it’s just the latest example of a trend that is putting women in the driver’s seat and in the theater seats for big Hollywood films.

We can trace the shifting sands back to 2011.  The “Twilight” series was already a juggernaut with young women when two unassuming female-led films – “Bridesmaids” and “The Help” – took Hollywood by storm.  Both movies had an impressive finish in the yearly standings, just under “Captain America: The First Avenger” and very much ahead of other male-centric studio films such as “X-Men: First Class,” “Green Lantern,” “Cowboys & Aliens” and “The Green Hornet.”

“Bridesmaids” and “The Help” couldn’t have been more different from one another in story and tonality, but each drove virtually the same box office ($169MM+), proving there was a real appetite for movies with female casts.  “The Help” went on to be nominated for Best Picture in the Academy Awards, while The Bridesmaids Effect became the new term to define the moment when Hollywood began to recognize an underserved market of female moviegoers.

And then came the “Hunger Games” franchise, with its strong female lead and supporting characters. The first “Hunger Games” movie blew the doors off the box office, bringing in $408MM+.  The following year, “Hunger Games: Catching Fire” was true to its title, breaking records and finding itself atop the heap as the No. 1 film of the year ($424MM+).

While Paul Feig (director of “Bridesmaids” and the new “Ghostbusters”) continued to set the tone for female-driven summer comedies with “The Heat” and “Spy,” “Trainwreck” and “Sisters” also joined the fun, and we saw a wide variety of other genres explored as well with the “Pitch Perfect” and “Divergent” franchises, “Fifty Shades of Grey,” “Cinderella,” “Lucy,” “Snow White and the Huntsman” and more.  And it was surprising -- and sensational -- that “Mad Max: Fury Road” boasted such a strong female story and a hero for the ages in Charlize Theron’s Imperator Furiosa, who was as important to the story as Max himself (if not more so).

And of course what discussion of recent hits would be complete without “Star Wars”? Last year, “Star Wars: The Force Awakens” introduced a new female hero in Rey (Daisy Ridley), while General Leia Organa (formerly Princess Leia) was dynamic as both a leader and a mother. Broadening the movie’s box office appeal by having such a strong draw for women -- and such viable role models for young girls -- was certainly a factor in its gargantuan success.  It is now the high-grossing movie of all time, with over $936MM+ in domestic box office alone.  The upcoming “Rogue One: A Star Wars Movie” also sets its story around a female lead (Felicity Jones) who, along with others in the Rebel Alliance, steals the plans for the Death Star, making this a de facto prequel to the 1977 original “Star Wars” movie.  That’s two back-to-back leading females in “Star Wars” movies – not bad, and not going unnoticed by female audiences.

Within this context, an all-female “Ghostbusters” might seem less surprising and, in fact, very timely as interest in, and from, female moviegoers gathers speed.  We’re certainly seeing the results here at National CineMedia (NCM), as our Millennial women 18-34 movie audience jumped 61% from 2013 to 2016, while women 18-49 also increased by 42%.  Also, NCM’s ratings for women 18-34 jumped from 6.2 to 9.2 against the top 15 television networks.  That’s a 48% surge in ratings growth since 2014 -- with significant increases year over year.

This momentum is great news for brands looking to reach women at the movies, and Hollywood is doing its part by continuing to develop more female-centric content, including the hilarious “Bad Moms” later this month.  In 2017, look out for a highly-anticipated live action version of “Beauty and the Beast,” the comedy “Mother/Daughter” starring Amy Schumer (possibly joined by Goldie Hawn in her first movie since 2002), “Fast 8” featuring Charlize Theron making waves as the sole villain, and more. And looking even farther ahead, there are all-female versions of “Ocean’s Eleven” and “21 Jump Street” in the works, a remake of the cult favorite “Road House” with Ronda Rousey in the role made iconic by Patrick Swayze, and a girl-power spinoff of “Suicide Squad” featuring many of the female heroes and villains of DC Comics.

Hollywood is calling millions of female moviegoers with stories and characters that truly speak to them, and women are answering -- especially Millennials.  So if women are also your target audience, “Who you gonna call?”