Ghosts of Fox’s Past Haunt Its TCA Day (Plus: “Scream Queens”!) 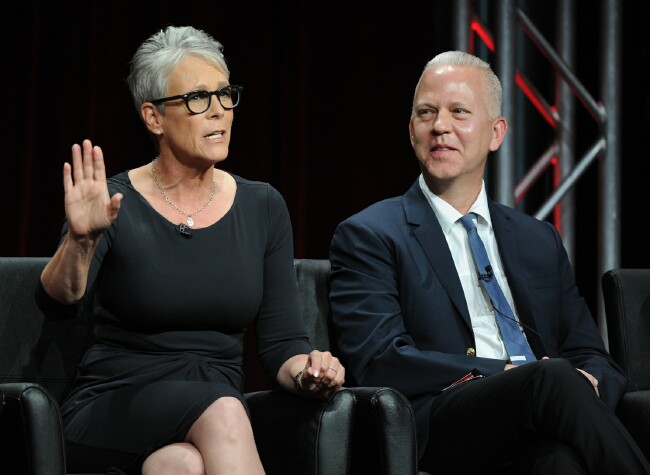 From the Department of Redundancy Department: Maybe it’s time for Fox to stop looking backward and instead move forward in its quest to come up with much-needed new series. That was the takeaway during its opening session yesterday at the Summer 2015 Television Critics Association tour with Fox Television Group Co-Chairmen and CEOs Dana Walden and Gary Newman, which included much talk about bringing back “Prison Break” as a limited series and producing a series based on the 1981 feature film “Urban Cowboy.” They also presented a sneak peak of a clip from the upcoming limited series return of “The X-Files.” Later in the day came a panel with the cast of Fox’s adaptation of the 2002 movie “Minority Report.”

None of these shows is necessarily a bad idea – in fact if done correctly any one of them could be a giant hit. But I couldn’t help but think that the current collective Fox mindset will not yield the next Big Thing – in other words the next “Empire” -- or even the next “Prison Break” or “The X-Files.” As one critic said to me, "What year is this?"

It didn’t help that the “X-Files” clip was surprisingly lifeless; Gillian Anderson and David Duchovny seemed old and tired and not at all interested or interesting, though I doubt anyone could have done much with the dialogue they were given.

I wasn’t aware that “Prison Break” had a strong enough following on Netflix to warrant bringing it back in any capacity. But that’s what Fox wants to do. (Plus, there was a direct-to-video movie that followed the series in which it was established that the main character had died. Evidently the limited series will get around that, somehow.) I seem to recall that only a fraction of its original audience was watching by the time it ended its run. In fact, I think that was also true of the “X-Files” audience when it came to a close -- and a few years later when the second “X-Files” feature film was released in theaters and nobody cared. (I remain hopeful that the limited series will be a true thriller, but that clip really curbed my enthusiasm, at least temporarily.)

Walden and Newman (pictured above) were followed by Ryan Murphy, his usual writers and actress Lea Michele, among others, excitedly chatting about their new series “Scream Queens,” a show filled with the same crazy characters and nasty humor as their previous effort, “Glee,” plus buckets of blood and much ugly ultra-violence. (The "Scream Queens" panelists are pictured below.)

Sometimes it is hugely difficult to write about a TCA panel without commenting on the show it is supporting. That’s certainly the case with “Scream Queens" which is, to say the least, an acquired taste. Like some of the shows mentioned above, it also feels a bit “been there,” in that it has notes of familiar outrageousness from previous Ryan Murphy television series: The snippy snark of “Glee,” the overt meanness of “Popular,” the underlying discomfort of “Nip/Tuck,” the violence and bloodshed of “American Horror Story.” On the upside, it also has the strong production values and inspired casting that characterized all of those shows.

Since it is too early to review the first episode itself, I’ll simply say that the press in the International Ballroom of the Beverly Hilton hotel could not get enough of “Scream Queens” or its cast, which includes the original queen of the scream, Jamie Lee Curtis (pictured at top with Murphy). For better or worse, “Scream Queens” will definitely be the big marquee media sensation of the broadcasters' fall season. Fox’s decision to put the entire cast on stage reinforced the fact that this show will be bigger than big, at least in the press.

Also in the plus column: The energy in the ballroom when “Empire” star Taraji P. Henson (pictured below with series creator Lee Daniels) appeared on stage (along with Daniels and two other producers of the show) made clear that the return of Fox’s sizzling hip-hop serial will be the other giant broadcast series event of the fall. (Earlier in the day, Walden and Newman announced the pickup of another drama from Daniels set in the music industry titled “Star,” about three young women on the way up. There isn’t a member of the TCA who doesn’t think Henson or others from “Empire” won’t make a guest appearance on “Star” or that one or more of the women on “Star” won’t pop up on “Empire.” It would certainly be a less-forced crossover than the one Fox announced yesterday between the contemporary forensics drama “Bones” and the supernatural chiller “Sleepy Hollow.”)

Late in the “Empire” session Daniels dropped what may have been the biggest news bomb of the day: He is planning a spin-off of “Empire.”

I thought the two panels for new shows that seemed to most engage critics were those for the Rob Lowe comedy “The Grinder” and the John Stamos comedy “Grandfathered,” primarily because Lowe and Stamos were so relaxed and conversational on the stage, punctuating everything they said with a sort of devil may care good humor. There was even a cross-over moment between the two, when Lowe was asked if he and Stamos knew each other well and Stamos, who happened to be walking through the back of the ballroom at that moment, called out: “Rob, tell the truth! We’ve dated for years!”

Fox adhered to its traditions of offering a themed afternoon snack break (this time with the cast “The Last Man on Earth”) and hosting its annual Summer TCA party at the swanky Soho House, which is generally one of the most exciting and productive events of the entire tour. This one was no exception.