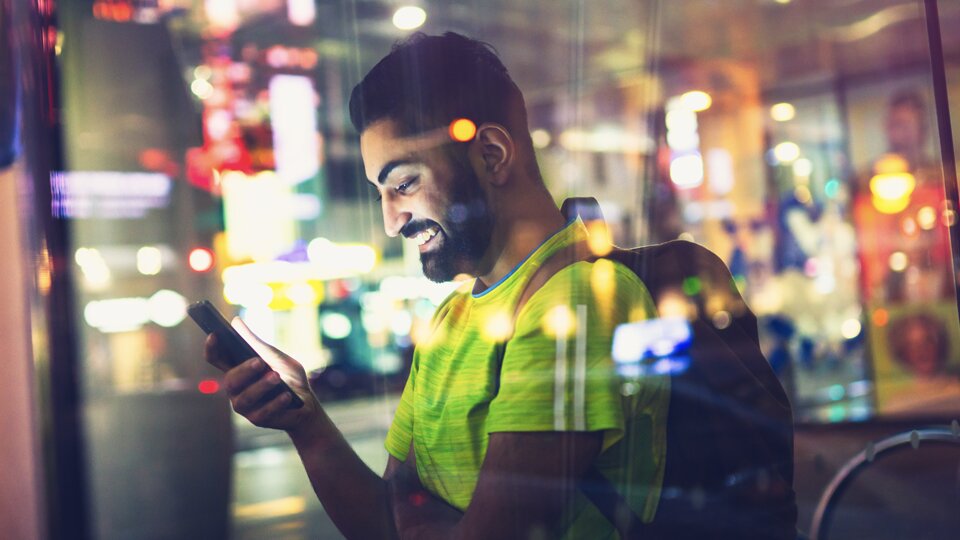 This past week featured significant news related to regulators or other legal bodies around the world taking actions intended to curtail the commercial power of the world's largest technology companies, which also happen to be among the world's largest sellers of advertising. We explore how concentration has risen among sellers of advertising in recent years and note that efforts to break up companies could lead to even more concentration among their descendant entities. Marketers may have mixed feelings about rising concentration levels but, to the extent they look at resource allocation broadly beyond paid media, they can mitigate negative consequences.

We also look at the important issue of polarization in society and what it means for brands. Polarization itself is not new, but heightened levels of polarization – arguably aided by the rising prevalence of conspiracy theories and willingness of consumers to act on those theories – paired with the availability of social media means that consumers are better able and more willing to hold brands accountable for their actions. We argue that while brands can't practically take stands on every issue, they probably will benefit from doing so on the issues they consider to be most important.

Legal efforts to curtail "big tech" – and "big advertising" – appear to be accelerating.

In markets around the world, regulatory and legal efforts intended to curtail the strength of the world's biggest technology companies seem to be shifting into a higher gear.

In the past week alone, in Europe, a court ruling has made it possible, under certain conditions, for any EU country's data protection office to take a company to court for GDPR violations. Previously it was up to a company's "home country," which primarily meant that Ireland, the legal base for most of the industry's relevant companies, was responsible for much of this work. The ruling could lead to additional investigations which might not have otherwise occurred, leading to either more fines or more aggressive implementation of the law.

Meanwhile, last Sunday Nikkei reported that the Japanese government will begin an antitrust investigation into how Apple and Alphabet, the two primary providers of mobile operating systems, work with mobile handset manufacturers. Similar news emerged on Tuesday in the UK where the Competition and Markets Authority announced it was engaging in an investigation focused on this effective duopoly.

And then on Wednesday, in the US Lina Khan was appointed as Chairperson of the FTC, the most important consumer protection body in the country. An appointment to the FTC was expected, but the role of Chair was generally viewed as a surprise. Along with the Department of Justice, the FTC is one of the main bodies investigating or suing large technology companies on antitrust grounds, including Facebook.

The latter body's efforts in this area were recently highlighted with the introduction of five separate bills on June 11 focused on "an anti-monopoly agenda for 'a stronger online economy.'" Put together, those bills intend to severely impact the operations of companies with market capitalizations over $600 billion, which as a practical matter only includes Alphabet, Amazon, Apple, Facebook and Microsoft. If the bills eventually became laws – far from certain, but certainly possible given existing bipartisan support – we can imagine ways each of the companies might alter their operations. Whatever actions they might take in their current forms, the factors which have supported the shares of advertising they have captured so far probably don't change by much, and as result, they probably retain their existing scale as sellers of advertising.

Whether because of legal obligations or pressure from governments and regulators or because the companies choose to do so voluntarily, more significant changes could happen if the companies referenced here are ultimately broken up. While there would technically be more competition in the industry, the smaller companies that might result from such actions would probably find themselves better able to allocate capital – available on an effectively unlimited basis to these companies – to new growth initiatives that might have been ignored by their larger predecessor companies. To the extent that subsequent investments were successful, that could have the effect of increasing concentration among the descendants of today's giants.

This would occur from already high levels. We can see current levels of concentration in data such as our own recent establishment of advertising market share estimates for the world's largest sellers of advertising, which we included in our most recent edition of This Year, Next Year. 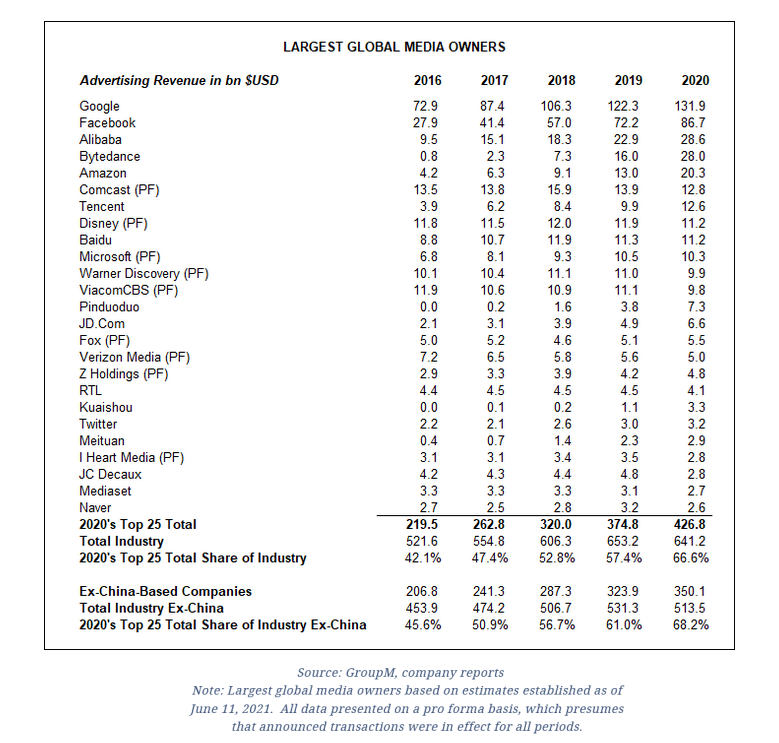 From a marketer's perspective, one can argue that high and rising levels of concentration among sellers of advertising are not necessarily negative. Marketers prefer to have many different choices of media owners to work with, but they also like the workflow efficiencies and ease of measurement that comes from having fewer partners. Moreover, no marketer is obliged to use paid media to build their brands: investments in product, distribution, cultural associations, events, creative executions and owned & operated media properties all provide alternatives for marketers, so long as they choose to invest in them.

Whatever you say, prepare to say something

A topic that has loomed below the surface in recent years relates to the consequences of polarization in society and its impact on choices that brands make. The effects will undoubtedly play out as 2021 progresses and well into the future.

Historically, brands have had little interest in engaging with issues where there was no dominant consensus. In Canada, following the Parti Quebecois election win in 1976 and as risks around Quebec's secession became evident (ahead of two failed referenda, in 1980 and 1995 intended to move this goal forward), marketers generally avoided explicitly addressing the issue. More generally, they reduced their spending and marketing activity in the province and attempted to steer clear of controversy. Similarly, around the same time, Northern Ireland faced "The Troubles," involving armed conflict with paramilitaries such as the IRA and government forces including the British Army, leading to thousands of deaths. Marketers behaved much as they did in Quebec, with one contemporaneous account from that era conveying to us that Nobel Prize-winning poet Seamus Heaney's line 'Whatever you say, say nothing' was an appropriate characterization of the period.

However, in the modern era, brands are far less able to stay quiet on topics that matter within societies. Polarization has become more pronounced, likely aided at least in part by conspiracy theories and the appeal of extreme ideas amplified in social media environments.

At the same time, it has become relatively easy for consumers to use social media to commandeer brands, whether intentionally or not, and associate their actions or what they stand for with that brand. Consider the actions of the Insurrection at the US Capitol in January. Hotel, restaurant and clothing brands were all attached to the event, regardless of the brands' lack of interest in being involved.

With every passing year, it may be increasingly difficult for brands to "say nothing" despite the risks and costs can come from taking sides. In a world where brand messages are increasingly distributed by consumers, an absence of support or opposition to a given issue may be viewed as opposition or support for the alternative. And if a brand is only speaking up for itself about its actual position after "the mob" has taken over, the brand may find it hard to cut through the noise that someone else is making and a brand may be seriously damaged in the process.

Brands can't take positions on everything of course especially as some will lie in conflict with others. But where there are important positions for the key stakeholders of a company, including employees, suppliers, the most valuable customers – they need to be positioned to tie those position preferences towards their messaging and media choices. This will give them greater credibility to reclaim their brand if it has been temporarily taken away, and potentially could help to cause undesirable consumers to disavow their preference for a given brand, reinforcing value to core consumers.International issues are another challenge to be navigated as well.

Admittedly, brands are in a difficult position when the values common to one country are not tolerated elsewhere. A brand owner can attempt to "thread the needle" of saying something in one country about a given issue and saying nothing in another. However, as a practical matter, the world is too globalized (especially via globally oriented social media platforms) and the messages that are present or absent in one country will likely cross borders over time.

We would argue that brands will be better positioned for the long run with all of their stakeholders if they continue to focus on what they believe in, both in terms of their operations and their communications, regardless of the geography in which they operate. The more internally consistent a company is on those dimensions, the more that stakeholders will believe the company holds those views and the more committed they will be to the brand over time. If a brand has chosen to live values that reflect the future world in which we all want to live, the rest of the world will eventually catch up, and the brand will benefit in the long run.