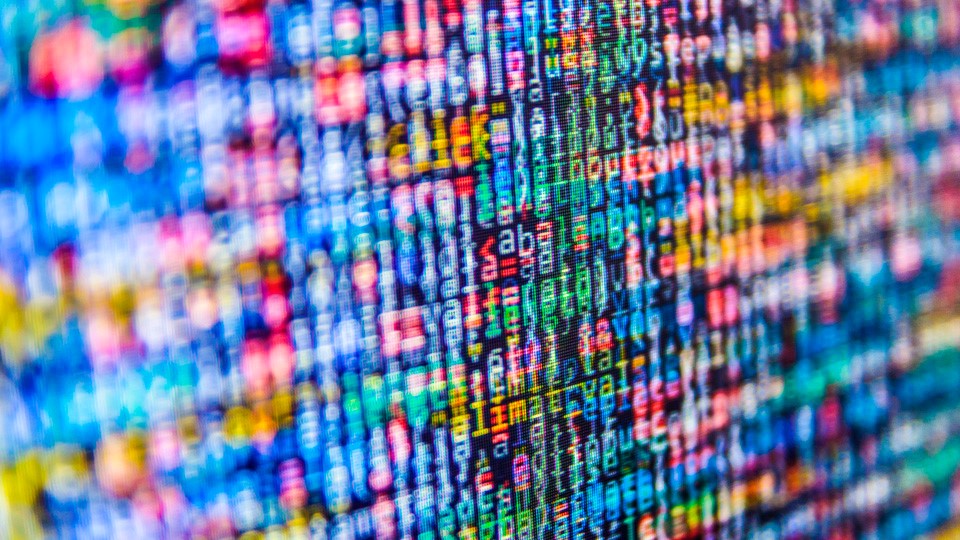 The week's biggest news for the media industry centered around Google as they provided an update that will more clearly align their ad tech with a more privacy-first web. While the news will rightly concentrate minds around the need to reassess how they manage and activate digital media budgets, marketers may also want to use the opportunity to revisit how they allocate resources toward brand building versus performance advertising.

The week also brought us an opportunity to review how some of the world's largest brand owners fared in the fourth quarter and through all of 2020. On our calculations, organic growth for the packaged goods industry was remarkably normal but, unsurprisingly, featured rapid growth in e-commerce. As television will remain an essential medium for those marketers for many years to come, connected TV will play an increasingly important role. News of the week from Roku, Nielsen, and Vizio further illustrated trends in that sector too.

We monitor earnings results and public information related to marketers and media owners, along with government data and economic releases from countries around the world. We do this to better understand consumer trends as well as advertising and digital transformation issues.

Google's announcement this past week that it "will not build alternate identifiers to track individuals as they browse across the web, nor will we use them in our products" was noteworthy for the advertising industry. It followed on last year's announcement that the company would remove support for third-party cookies in Chrome and followed on Apple's introduction of limitations on tracking in new versions of iOS.

The news was significant for how it concentrated many minds in the industry around the meaningful ways in which marketers and agencies will need to change workflows to optimize their digital advertising budgets to accomplish existing goals. On the other hand, it's also significant as a reminder to brand owners that changes to how ads can be targeted should lead to a reassessment of the balance of resource allocations between "performance" and brand-building, which, of course, are not necessarily mutually exclusive.

​​​​​​​No impact on total advertising growth of shifts of spending into/out of digital. Some context of the bigger implications is worth stating to start: we don't expect the news to have a noticeable impact on total advertising industry growth. As we have noted in the past, when there have been changes in data policies, whether at a platform, media owner or governmental level, spending levels have not been noticeably impacted. Of course, changes in the availability of data or preferred uses of data can significantly impact what media owners and technology platforms win or lose on a relative basis.

Impact on Google's revenue is probably limited.For Google specifically, the news probably does not have a meaningful impact on revenue, at least not a noticeable one. To start, it helps that Google is already as large as they are, so moving the needle on a growth trajectory is challenging to begin with. Search advertising is primarily bought based on context and YouTube is well-positioned to sell on the basis that doesn't rely on narrow targeting. This is because video advertising can sell well without depending on the kind of precision that banner ads rely on and also because an advertiser who wants to use digital video will continue to find that YouTube dwarfs every alternative supplier. This means that property will probably be able to satisfy related media goals better than alternatives. Further, to the extent that Google's advertiser base is heavily skewed toward smaller businesses, and to the extent that small businesses tend to budget for advertising in general on a rule-of-thumb basis, these advertisers' budgets would not be impacted by much with the loss of unique user identifiers.

Alphabet's public positioning is now more closely aligned with Apple's and contrasts more starkly with Facebook's. At the same time as Google's product changes are intended to have the effect of causing the advertisers and ecosystem participants they work with to use less data that refers back to individuals, Facebook is publicly advocating the benefits of individual targeting with its "Good Ideas Deserve to Be Found" campaign. Arguably, Alphabet will be better positioned to argue to consumers that they are just as privacy-focused as Apple and, to governments and regulators, they can present themselves as much more privacy-focused versus Facebook. To the extent that the direction of travel from regulators has aligned with Apple and now Alphabet's orientation, among larger technology companies, Facebook may find itself more isolated than before.

In the short-term, Alphabet may become incrementally less competitive in some parts of the industry but may be better-positioned long-term in others. The news may make Alphabet less competitive in selling third-party inventory because it may be harder for them to monetize that inventory versus other sellers. Similarly, their ad tech products may be less competitive for marketers who prefer to continue buying digital advertising with unique user identifiers. On the other hand, to the extent Alphabet helps – or doesn't get in the way – of efforts by parts of civil society to push the industry away from user-level identification, the industry might further shift away from those concepts. To the extent that Google's preference clears a path towards laws or norms among advertisers moving away from the use of unique identifiers, it could negatively impact other ad tech companies. Toward those ends, we saw a pretty meaningful hit on companies' stock prices focused on ad tech, such as Criteo, LiveRamp, Magnite, The Trade Desk, Pubmatic and Viant. While it is significant to those companies, the combined total of revenue that those companies collectively generate is substantially smaller than the entirety of Google's ad tech businesses related to the legacy of Doubleclick, which itself is not large enough for Google to have to disclose revenues on a stand-alone basis.

Opportunities to reassess the role of brand building versus performance may follow. To the extent that this news will likely compel marketers who have not already formed a preference around dealing with the cookie-less world to accelerate related efforts. If short-term targeting-driven "performance" thrived in the world of cookies and becomes harder to accomplish in the future, one of the knock-on effects at the brand manager/business unit leader level could be an opportunity to reassess the allocation of resources towards longer-term brand-building vs. shorter-term performance-based goals.

2020 Ended Up Surprisingly "Normal" for Fast-Moving Consumer Goods. With virtually all public companies in packaged goods having reported fourth-quarter calendar and full-year 2020 results, we can calculate that non-alcohol-based consumer packaged goods covering nearly USD 500 billion of annual sales grew 4.0% during the fourth quarter and 3.1% during the full year on an organic basis. This was similar to trends observed in other recent years, despite the pandemic. Among the sub-category trends we observed, the following stood out 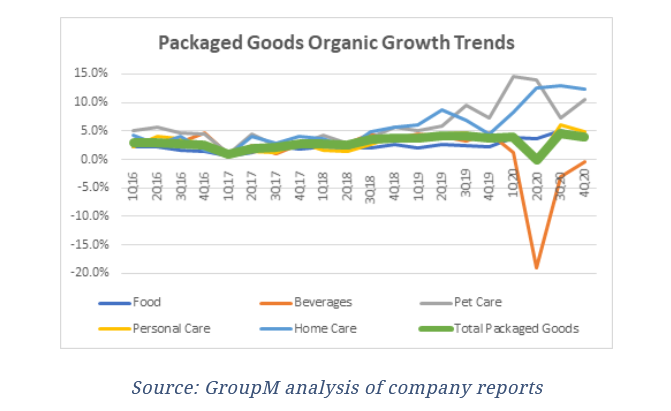 E-commerce now accounts for approximately 11% of revenue within the category. Unsurprisingly, e-commerce featured prominently for this group of companies. While definitions of e-commerce sales vary – some will report grossed-up revenues based upon what they estimate retailers sold via these channels. Others only report their direct revenues for goods they know sold in this manner, with definitions sometimes unclear; growth was rapidly everywhere. Looking at companies in the sector who consistently provide disclosures around e-commerce – 86% of revenue from the category, or virtually all of it — we can calculate that e-commerce sales grew by 57% and accounted for 11% of sales in 2020 versus 7% in 2019.

Alternative sources of data on the sector convey slightly different trends.Interestingly, this data contrasts with a report released this week from IRI and consulting firm BCG, which indicated that CPG sales covering $933 billion of annual sales grew by 10.4% in the US during 2020 following a period between 2016 and 2019 when growth averaged 1.8%. Large CPGs (as defined in the report and accounting for $419 billion of annual sales) grew 7.5% within this group. The difference in observed results is of interest, as prior years appeared to be more similar (the growth rate for our composite of large companies amounted to 1.3% between 2016 and 2019 versus IRI/BCG's large company figure of 0.5%). Alternately, we can also look at data covering the main sales channels for these retailers and observe that US retail sales from grocery stores, pharmacies and drug stores, "other" general merchandise stores (a category which excludes department stores), as well as warehouse club and superstores saw 7.8% growth during 2020. That same group of retailers experienced a CAGR of 3.2% between 2016 and 2019.

Methodologies and focus of data help explain the differences. There are significant differences in how each data point is aggregated and what each reflects. Still, each can provide a useful reference point in describing trends affecting the packaged goods industry. Among the factors explaining differences are the nature of the data. IRI and BCG are capturing or estimating sales from the bulk of retail channels, whereas our estimate captures the manufacturers' revenue. There can be differences because manufacturers sometimes sell directly to consumers. They may sell through non-retail chains, or there may be differences when revenue is recorded by companies versus when the products are sold. Similarly, the US Census Bureau will differ in its data capture sales at specific types of stores meeting certain definitions, covering all goods sold through those stores. However, when assessing manufacturers' current state, the like-for-like revenue trends they experience are likely the most important metrics to focus on.

Vizio filed an S-1 to go public next week and provided new data points for connected TV advertising. A company primarily known for manufacturing television sets, Vizio filed documents for a public stock exchange listing this week. Data within the filing was notable because of the massive expansion in advertising the company has experienced as it has focused on the opportunity to sell connected TV inventory over the past couple of years. Overall, Vizio generated $72 million in advertising revenue in 2020 versus under $9 million during 2019. While small at present, the results show that significant scale already exists across the industry at other OEMs, including LG and Samsung. Along with Roku, Amazon and others, connected TV inventory will take a growing share of TV advertising as consumption grows and efforts to monetize improve.

Roku further improved its position to expand connected TV advertising as well. In another illustration of efforts to expand connected TV advertising, Roku had a noteworthy week as well. First, the company announced on Monday that it would buy technology and people—approximately 100—from Nielsen. The effort may be directly significant in monetary terms, but it will undoubtedly help both companies strategically by improving the measurement and monetization of connected TV. Roku followed up the news with a filing to raise $1 billion of new equity, which, if raised, will provide the company with a meaningful amount of additional capital to invest against growth opportunities.