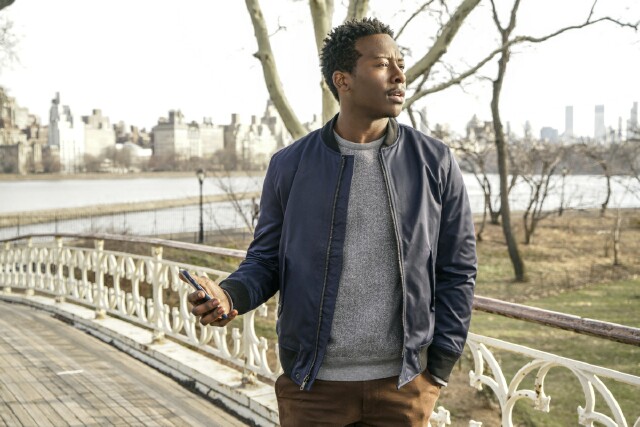 CBS’ light-hearted freshman drama God Friended Me focuses on a young man who’s an avowed atheist, despite all signs around him pointing toward a greater being at work.  The show, though, isn’t promoting blind faith in a deity; it’s about believing in the inherent goodness of people. Premiering Sunday, Sept. 30, in the premium time slot right after 60 Minutes, the series has already been compared to Touched by an Angel and Highway to Heaven,both past hits on the network.

“I am absolutely okay with those comparisons,” star Brandon Michael Hall (pictured above) told me one August afternoon at the Beverly Hilton in Los Angeles.  If he looks familiar that’s because he was the unlikely politician in last season’s The Mayor,a short-lived but critically acclaimed sitcom, and has worked steadily since graduating from Juilliard in 2015.

Wearing a pink suit, pink sneakers, an ankle bracelet and a pink tie, Hall was clearly at ease in his skin, discussing his new series -- one that tackles nothing less than the meaning of belief.

“You are not going to see a God or angels or demons,” Hall said.  “The only God you will get close to meeting is on an account.”  That account is a familiar one -- Facebook.  Hall’s character, Miles Finer, receives a friend request from God.  He deletes it.  Within the pilot’s first five minutes, Miles receives five such requests.  He deletes them and they instantly pop up again. His immediate suspicion is that it’s some prankster’s handiwork.  Obviously, he’s wrong.

Miles may struggle with what to believe, but as the son of a preacher man he knows his Bible.  He and his father, played by the always terrific Joe Morton (pictured below), are estranged.  When viewers meet Morton’s Reverend Finer, he is practicing a sermon.  His first words on the show are: “God is always testing us.” 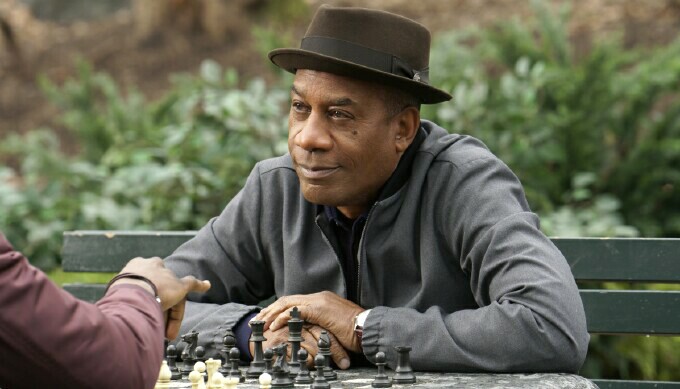 Morton picked this role because it is “diametrically opposite” to his character on Scandal.  Indeed, God Friended Meprompted Morton to consider what this series could accomplish.  “I’m hoping this sparks a conversation of man’s kindness to man,” he told me.  “How do we, with social media, go about helping people?  It’s about what we do reflexively, as opposed to what we don’t do when we think about it.  Despite the fact that Miles is an atheist, he is in a position to help other people.  You don’t have to believe in God to believe in good.”

He’s no stranger to the sort of church his character preaches in, and remembered his grandmother taking him to one of the most famous, The Abyssinian Baptist Church in Harlem.  “Adam Clayton Powell was still preaching when I went to church,” he recalled.

And, he attended Catholic military school, which Morton added with a grin, “is a little bit redundant.”  So, he did not feel the need to interview a preacher for his research for the role, though he did study the Reverend Michael Curry, who delivered the powerful sermon at Prince Harry and Meghan Markle’s wedding.

Morton has done his thinking about the church and its effects on people and admitted that he worried a little about a possible backlash to God Friended Me.  He fretted that some people could have a kneejerk reaction to the show, without even seeing it.  People can be very sensitive when the word “God” is in the title of something, he explained.

Perhaps, and perhaps it’s not edgy enough for those who need constant sneering.  Yet who could argue with its baseline?  It’s a human responsibility, not necessarily a religious one, to help people. And as one person is helped, the kindness is paid forward in a karmic circle.  In the pilot, everyone God suggests Miles friend has a name found in nature: John Dove, Katie Rivers, Cara Bloom.

Although God Friended Me is a show that aims for a higher plane it doesn’t take itself too seriously.  “Not for one moment have I felt I was getting preached to,” Hall noted.  “The goal I have for the show is that someone going through times where they don’t have anyone to talk to, or feels down, can tune in to a story that’s captivating.  We just want to spark a dialog about kindness, about humanity, about faith, about what it means to search for something.”