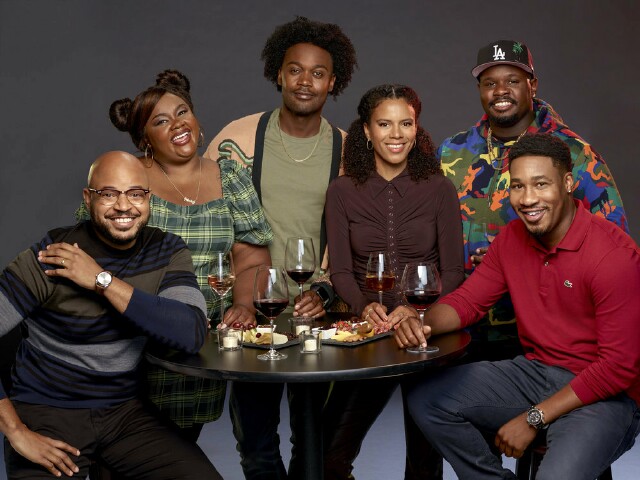 "Cabernet and sauvignon, team is here and now it's on / Carry on and Carignan, sippin' on Perignon / Fine wine got notes like a cello, Pull up in the spot like hello / If you got me, then I got you, this is the vibe, this is the crew!" Those are the lyrics to the surprisingly catchy intro of NBC's new sitcom Grand Crew, and, like said intro, GC is chock full of wine, wit and wordplay to boot.

Created and written by Phil Augusta Jackson (who wrote for Insecure, Brooklyn Nine-Nine, and Key and Peele) and executive produced by both Jackson and Dan Goor (who wrote for Brooklyn Nine-Nine, Parks and Rec, Late Night With Conan and even the OG Daily Show), Grand Crew follows a close-knit group of friends and their various interpersonal exploits as they hang around their new favorite spot -- a wine bar. It stars Nicole Byer as Nicky, Echo Kellum as her sucker-for-love-ass brother Noah, Justin Cunningham as their successfully married and supportive friend Wyatt, Aaron Jennings as UCLA grad Anthony and Carl Tart as his hilariously down-to-Earth roommate Sherm. The comedy is comprised of well-timed and culturally accurate punch lines that support an overall narrative of emotional health and maturity that seems to run through the episodes I've seen so far. Even still, the show remains light on its feet, probably because of all the practice that Jackson and Goor have had pulling off similar moves on shows like Brooklyn.

The series opens up on "the narrator," played by TV legend Garrett Morris, who I have fond memories of as Uncle Junior on The Jamie Foxx Show. He delivers a short monologue about Black people not having any one particular temperament, because we are not a monolith, and "our multitudes have multitudes." Then, we're swiftly dropped into the lives of this "grand crew" as they discuss the usual topics, like their immediate personal plans and Noah's ridiculous love life. From there, it just becomes a hilarious sitcom about a super-relatable group of Black friends, and honestly, I kinda love it.

I also dig the idea that this group will primarily frequent a wine bar. As Sherm puts it in the show, "LeBron drinks it. Wine is Black now!"

I'm happy to report that a lot of this stuff revolves around Noah. In one scene Wyatt is checking in on him after an unexpected break up. Noah says, "You know, at first, I was like shot-through-the-heart, shout-out Bon Jovi. But now I'm stronger than yesterday-shout-out Britney Spears. We are never-ever getting back together, shout-out Taylor Swift." Wyatt responds, "Noah, those are the white people you listen to when you are saddest. Are you sure you're good?" At that moment, Noah was hallucinating his ex as a meteorologist on the news, so, no, he was not good.

Again, Noah's lust for love seems to be the main thread throughout the series, at least so far, but that thread does weave its way through the emotional make-up of the rest of the crew, at least thematically. For example, when Noah has a very on-brand emotional epiphany regarding the newly casual nature of his relationship with his ex, and it almost leads to a breakthrough for his sister. Almost.

His sister Nicky is the opposite of Noah when it comes to love, and when it comes to her general approach to life. The way she puts it, "Life isn't a rom-com. If anything, it is a psychological thriller where at every corner someone is trying to trick you or kill you." (She isn't wrong.)

Noah, after explaining to his ex how his father's chosen loneliness after their mother's death motivated him to become a hopeless romantic, finishes up by saying, "I'm just a boy, standing in front of a girl, saying I don't wanna have sex with other people. It's too much pressure, and what if I forget which sex moves are for what person?" Cut back to the bar, and Nicky starts to have herepiphany.

"So is dad's emotional barrenness after mom died the reason why I try to collect as many dating experiences as possible while using humor to keep my walls up emotionally?" she wonders. We pause just long enough to think this may be serious, and then, with all the emotional subtlety of It's Always Sunny's Dee Reynolds, she yells, "Gulp-boo-da-boo! I guess we'll never know."

That's because they're dancing on that line, people. This is too funny a show to cross it whole-heartedly right now. Think a little less Insecure, and a little more New Girl.

Honestly, that's really the vibe, or at least the most comparable configuration. You got a group of friends, all sharing in one another's lives in particularly over-the-top but good-intentioned ways, with a level of maturity that borders on silly, so that we may enjoy lines like, "So crying is worse than seeing someone's genitalia?" "Way worse. He saw my emotional genitalia."

Grand Crew is legitimately a good time. Seriously, from the scene where Noah gets brutally Love & Basketballed on (you gotta see it), to Anthony and Sherm's slap boxing match over toilet paper and kombucha, to Nicky finding out to her horror that she was smashing a Black Republican, it's all Black gold, baby. It's an ode to the culture, and friendship, and wine, and the idea that people of color have emotional depths that go beyond what we've all typically seen, and it does all this without forgetting that the laughs come first.

I can't think of a grander crew to raise a glass with every week. As the narrator puts it at the end of GC's first episode, "Á votre santé (to your health)!"