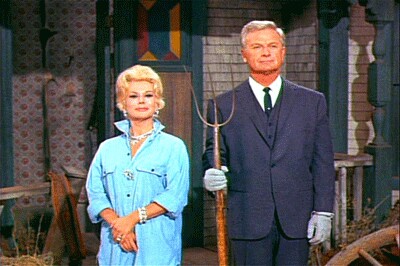 Younger readers who only know certain facets of life as they are experienced via digital media might be surprised to learn that computer dating services were with us long before the arrival of Match.com, ChristianMingle, eHarmony or JDate. In fact, they have been a thing going all the way back to the Sixties. For proof, look no further than an episode of the classic comedy “Green Acres” titled “The Computer Age” that was first telecast on February 15, 1967.

“In a few years all farming will be done by computers,” Hank predicted, somewhat incorrectly, but not without a certain degree of prescience. “In the future, farmers will not have to depend on people like myself to get information about farming. I will be replaced by a computer!”

After Oliver expressed his enthusiasm for seeing the annoying Hank replaced by anyone or anything, Ziffel asked him, “Do you believe it’s possible for one of them computers to tell us what to plant?”

“Yes, it is,” Oliver knowingly replied.

“If you believe that you’re a bigger fruitcake than [Hank] is!” Ziffel snarled. “You’re suffering from shriveled raisins!”

Later, Oliver attempted to explain computers to his perpetually befuddled wife Lisa (Eva Gabor). In simple terms that even she could understand Oliver said, “Computers are great big machines that give you information on any subject.” She didn’t buy it.

Computer dating came into play when lovelorn carpenter Ralph Monroe (Mary Grace Canfield) asked Oliver if she might borrow $18 to “find a husband.”

“In my experience there are very few good $18 husbands,” Lisa cautioned.

As it happened, that was the fee charged by a company known as Cupid’s Computer Club – a “lonely hearts club with transistors,” as Ralph put it.

Oliver was familiar with such matchmaking services, telling Lisa that the club was “one of those places where they use a computer to find you a mate.” He explained that people looking for love supply information about themselves, after which holes corresponding to that information are punched in cards and the cards are run through a computer with several from the opposite sex, leading to a likely match.

“That isn’t very romantical!” Lisa protested. And then, sounding like anyone old enough today to remember getting through life just fine without dating sites and social media she added, “Before there were machines there were men and women, and it worked pretty good without punching holes!”

“There’s nothing wrong with using a computer to find a man or a woman,” Oliver asserted, sounding very new millennial and at least 35 years ahead of his time. “It’s all done scientifically.”

Determined to prove that computers could not be trusted, Lisa insisted that Oliver accompany her to Cupid’s Computer Club and that they put its’ service to the test. Further, she made a bet with him that they would not be a match. The computer, referred to as the Match and Mate Machine, was one of those enormous card-sorting machines that were the size of a small vehicle and quite common by the ‘70s.

After Oliver’s and Lisa’s forms were filled out and the appropriate holes had been punched their cards were run through the machine -- and did not land in the same slot.

Lisa’s response was to conclude that they were never a match in the first place and to temporarily shut Oliver out of their bedroom. They later worked out their differences, with Oliver telling his wife, “I don’t care what any computer says. You and I are made for each other.” (One thing about this crazy show that always stands out for me is that never for a minute was there any doubt that Oliver and Lisa were wild about each other.)

Further complications arose when Ralph Monroe revealed that the Match and Mate Machine paired her with Oliver. “You should be ashamed of yourself, slotting around with other women,” Ralph scolded.

One can only wonder how these characters might have responded to online dating services and sex apps. Then again it’s probably best not to think about that.