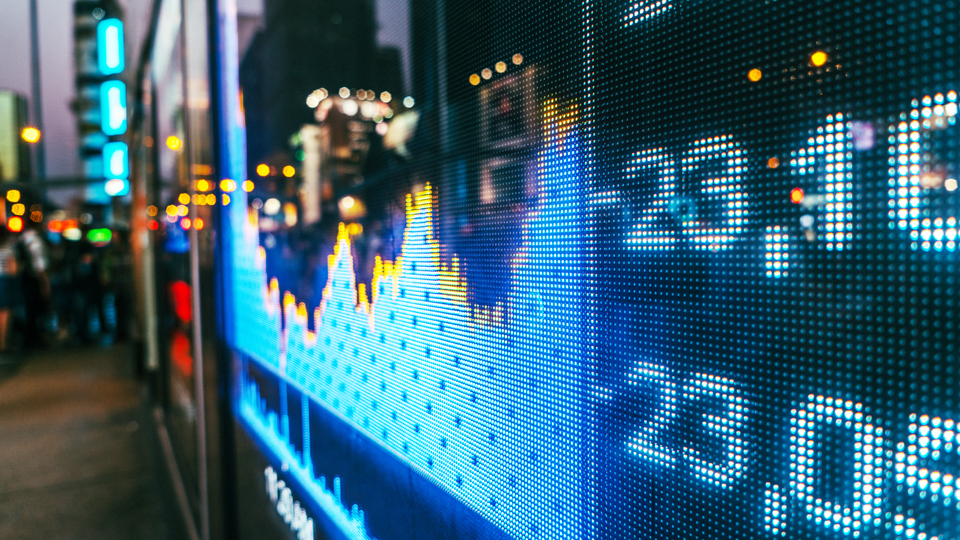 U.S. Advertising Market Update - GroupM is revising our expectations for advertising growth in the United States. During 2021, we now expect the US advertising market to grow by 15% ex-political this year vs. 2020. This represents an improvement relative to our 12% forecast from December. Full-year activity should be 6% above 2019 levels, indicating a more-than-full recovery.

Small business growth is driving much of the advertising growth – and skewing towards digital media (Facebook and Google in particular). Additional economic growth driven by stimulus payments and a whiff of general market inflation supports the revisions to the US numbers.

Raising 2021 US advertising forecast to 15% ex-political growth from 12% previously due to stronger-than-expected economic growth and expanding numbers of small businesses. In 2021, the American advertising industry is poised to regain all that it lost in 2020 and more. Excluding the impact of political advertising, we forecast the industry will grow by 15% this year, better than our prior 12% forecast. 2021 should end the year with 6% more activity than we saw in the last "normal" year of 2019. 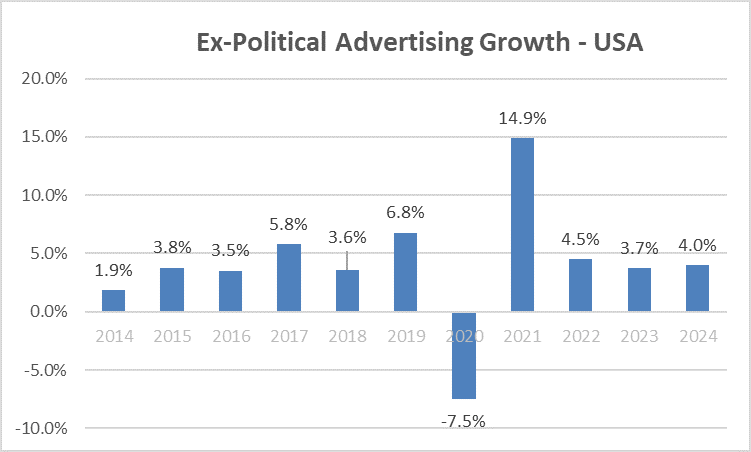 Our upgrade of expectations is primarily a reflection of the healthier-than-expected recovery of the economy from the depths of the pandemic paired with the significant impact of fiscal stimulus the federal government is providing to consumers. Digital advertising is the primary beneficiary of trends impacting the economy, both because new small businesses are forming at a record pace (even if collectively they may be losing share of activity within the economy) and because large businesses are increasingly focused on e-commerce, with spending shifts to digital media generally aligning with this trend.

Economic conditions have improved meaningfully. Elaborating further on the economy, the United States is more favorably positioned for 2021 now vs. where it was at the end of 2020. Towards these ends, economists' expectations began to improve dramatically at the beginning of this year, as illustrated in the chart below, which shows changes in expectations for 2021 growth every month since the beginning of last year. The contrast between the US and European markets is particularly notable.

Embedded within our last forecast in December was an assumption around the successful distribution of COVID vaccines by mid-year 2021. However, the outcome of Georgia's Senate races led to expectations for a massive stimulus package (which turned into the American Rescue Plan Act of 2021 passed into law this month) and this would have contributed to further expectations for growth. Of the $1.9 trillion estimated value of the Act, $1.1 trillion is set to be disbursed during 2021, according to the Congressional Budget Office. This equates to 5% of the US economy's $21 trillion GDP. Even presuming that a significant share of this stimulus is saved or used to pay off debts, a meaningful amount of new money will make its way into the economy. 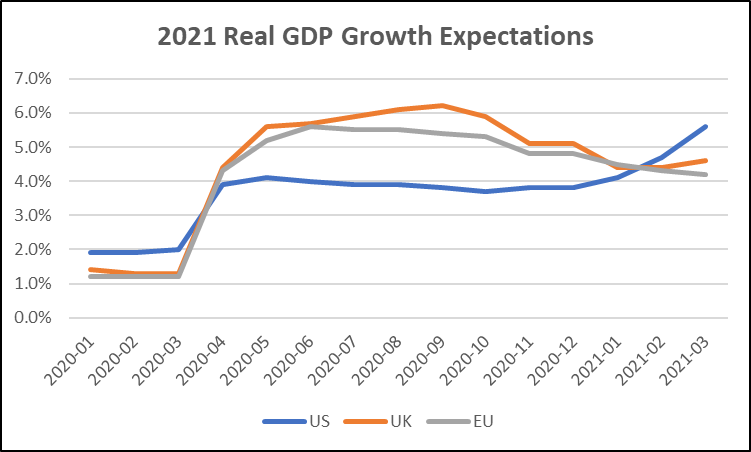 New large businesses often spend large shares of revenues on advertising. As indicated above, one specific factor which helped sustain advertising in 2020 and which will continue in 2021 is the ongoing expansion of large businesses whose spending is relatively more intense than the businesses they have effectively replaced within the economy. Higher levels of advertising intensity can be understood well conceptually when we look at many of the newest large companies and consider the businesses they effectively replaced. Although many companies focused on e-commerce or streaming services either limited their spending increases or cut their spending in 2020, for every dollar of revenue these companies generate, they are often allocating significantly more to advertising for every dollar of revenue than their traditional competitors ever did. Other newer businesses such as dating, food service or ride-hailing apps never really had directly comparable peers operating at a national level. To the extent they displace traditional businesses, it is also occurring with a higher proportion of advertising on a relative basis.

Small businesses are potentially a bigger factor, and they are growing in number if not in share of economic activity. Another factor is the growing numbers of small businesses which have emerged during the recovery. Each of them is likely to spend some amount on advertising, even as all small businesses collectively lose share of economic activity relative to larger ones. Small business formation is well-illustrated by data tracked by the US Census Bureau, based upon applications for employer ID numbers from the IRS. On a year-over-year basis, we saw a decline in such applications during the spring in a manner that mirrored what we saw during the global financial crisis. But then as the summer progressed there was massive growth in these applications. Although this data does not capture the businesses which shut down during the pandemic (data from the Bureau of Labor Statistics on this metric is only available with a significant lag), the growth indicated here likely reflects a healthy market for start-ups. As new businesses are typically small businesses, and small businesses who advertise primarily have small ad budgets in absolute terms, Facebook and Google tend to be the primary beneficiaries within the advertising industry. 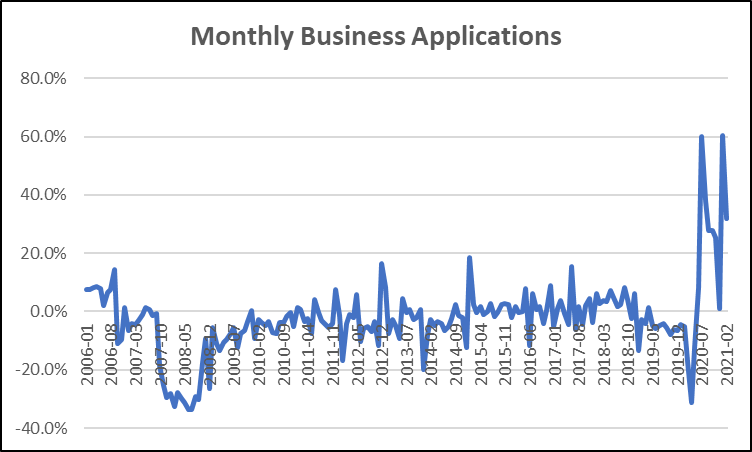 Of course, it bears repeating that small business growth does not equate to growth in share of economic activity: data we have seen over extended periods in most countries around the world reinforces the idea that large businesses continue to expand their share instead. On a short-term basis, we look to employment growth as a proxy for revenue growth. Employment and revenue tend to grow in line with each other, although economy-wide revenue data is only available with a more significant lag relative to employment data. 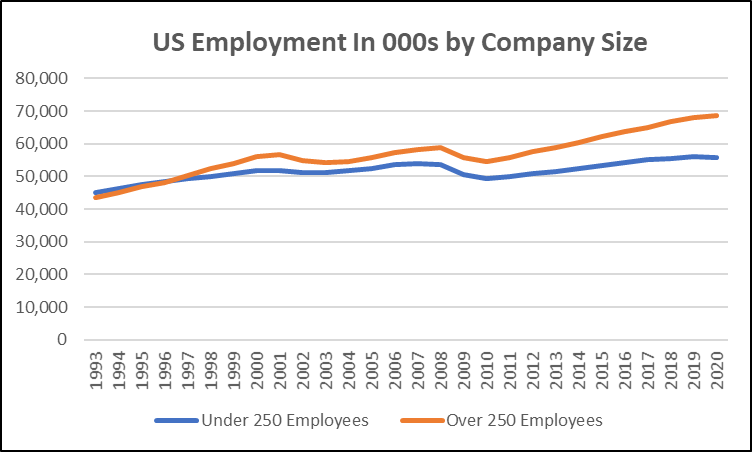 All of these factors are partially offset by categories that remain constrained in their capacity to operate, as with those in the travel, entertainment or restaurant industries. There are other potential risks as well, such as those related to supply chains for the automotive sector or others dependent on global trade which could also have knock-on effects on advertising budgets. Still, overall economic conditions paired with inflationary risks present meaningful tailwinds for economy-wide advertising growth during 2021.

Digital advertising is driving growth. Going back into the advertising forecast at an individual medium level, the story remains more-or-less as it was at the time of our December forecast. Digital advertising continues to grow at a robust pace, with 22% growth estimated in 2021 off of the 2020s estimated 7.3% rate of growth, excluding political advertising. This outcome should be aided by the aforementioned small business activity as well as large brands shifting spending into digital media to support their still-rapidly growing e-commerce activities. It's also aided on the margins by the diminishing capabilities of television, as marketers look for alternative outlets for those budgets.

Television remains resilient. However, television remains resilient overall considering the double-digit audience declines the ad-supported form of the medium is experiencing: for the full year we expect 9.3% growth in national TV, including related connected TV and other similar advertising activity. The significant expansion of content on streaming services will ultimately be helpful to growth in the broader media industry, but advertising will not likely be a driver of that growth any time soon given the limited opportunities for marketers in those environments. On a relative basis, local TV will be weaker in total (down 15% on our estimates) because of the absence of much political advertising this year, although ex-political growth will be strong on a comparable basis, with a forecast gain of 16%. Local cable should generally fare better than local broadcast, aided in part by ongoing efforts to sell advertising on an addressable basis.

Other media is mixed. Other media will experience a wide range of trends, which can be difficult to interpret on their faces because of the difficult comparables most have with 2020's results. Print, including newspapers and magazines, will likely continue to decline in 2021. Where publishers are investing in their properties, they will maintain a capacity for growth and an ability to add tremendous value to marketers' advertising efforts. Unfortunately, in much of the industry, the opposite has been occurring over an extended period. It remains to be seen whether legislative efforts to empower publishers to negotiate collectively with Facebook and Google will make much of a difference, although to the extent that incremental revenues are generated from the related licensing activity and redeployed into content, individual publishers will be poised to benefit and the industry might diminish its pace of decline.

Radio and outdoor should, on the other hand, rebound with significant growth during 2021 and return towards the prior trajectories each was experiencing before long. Newer forms of radio – including podcasting, but also streaming audio services – help provide some "sizzle" to the medium, although the local orientation of radio's advertiser base constrains growth. Outdoor also benefits from digital formats, while allow for incremental sources of demand to make use of the medium. We expect outdoor to return to mid-single-digit levels of growth in 2023. 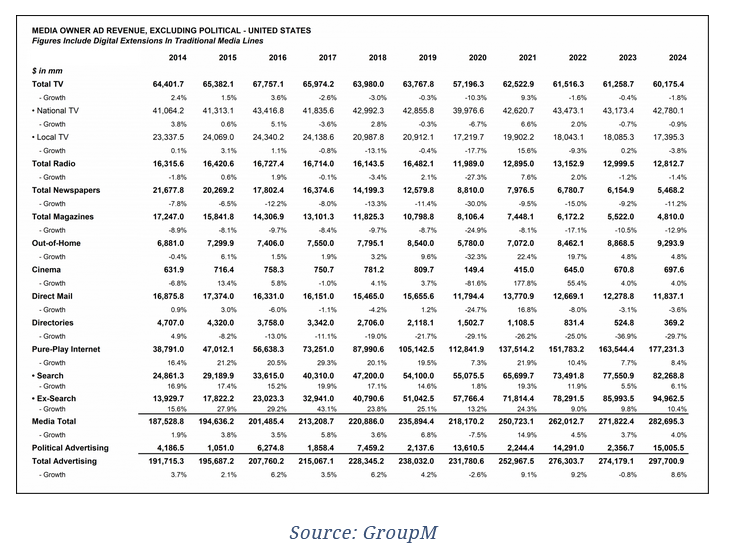