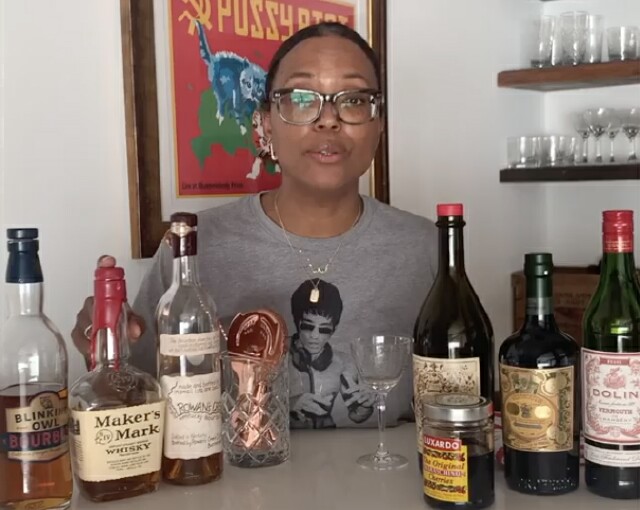 As Hollywood production continues to largely languish amidst the Coronavirus pandemic, more stars are joining the Guerrilla TV movement that we reported on last week.

Still leading the pack is Miley Cyrus, who continues her message of communication, conversation, honesty, comfort and unity via her highly entertaining and endearingly low-tech Instagram talk-show Bright Minded, weekdays at 2:30 p.m. (ET). 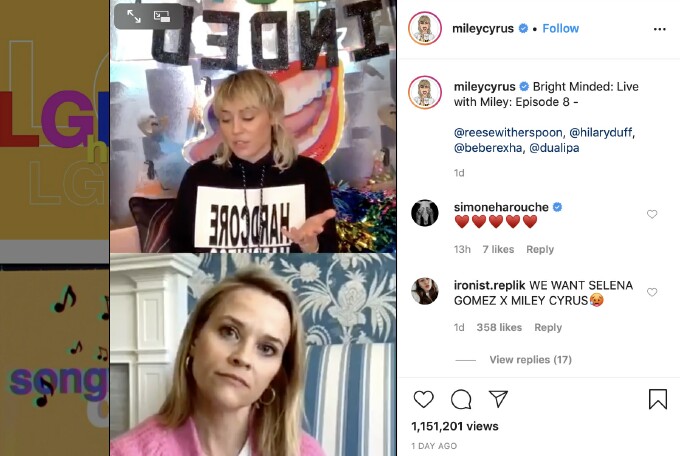 Since its inception, Cyrus has added a light-up backdrop to her living room “set” and continues to draw more big names to the show.  Recent guests have included her mom Tish and dad Billy Ray, Reese Witherspoon, Hilary Duff, Ellen DeGeneres (who anointed her by dubbing Cyrus a “very good talk-show host”), and her former Hanna Montana co-star Emily Osment.  These are just a few of the names willing to share useful tips on how they are handling self-isolation and social distancing, along with pet rescue and fostering tips during the crisis.  Cyrus is also supporting local L.A. businesses like LOLA, an all-natural feminine hygiene company, who in Cyrus’ own time of crisis came to her rescue.  (She had been unable to obtain a tampon.)  In appreciation, Cyrus partnered with the company to donate 100,000 LOLA feminine hygiene products to emergency shelters across the state in desperate need.

From the comfort of her garage, Rosie O’Donnell recently joined forces with Broadway.com to "revive" her beloved late-Nineties daily talk program, The Rosie O’Donnell Show, for a special episode.  (It has a running time of three hours and 30 minutes, and it flies by!)  O’Donnell even invited her original musical director John McDaniel back for the event.  With Broadway luminaries including Lin-Manuel Miranda, Idina Menzel, Bernadette Peters, Matthew Broderick and Sarah Jessica Parker on hand, along with Barry Manilow (to name just a few), O’Donnell used the platform to raise money for The Actors Fund (over $500,000).  This presentation had all the vibes of her Emmy Award-winning TV show, and Rosie looked completely relaxed and happy at the helm.  We think she should do it more often.  Let's call it #GarageTV. 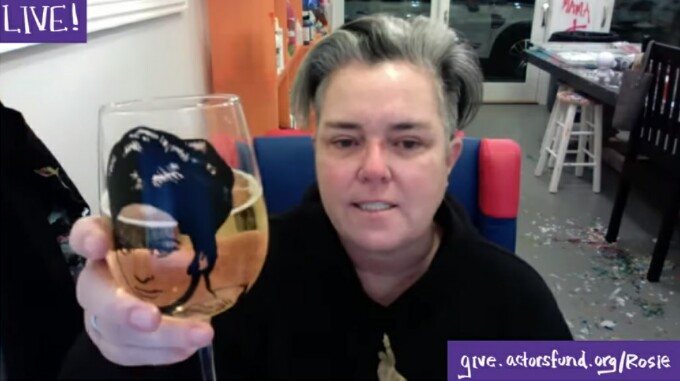 In addition to the special episode of her talk-show, O’Donnell has created a series of vignettes available on YouTube featuring friends like Neil Patrick Harris performing live magic, accompanied by his twins and a performance by Kristen Chenowith.  All are available to watch on YouTube.  As with O’Donnell’s special, donations to The Actors Fund are still being accepted.  Click on the images below to watch.

Over on Instagram, DJ D-Nice recently hosted a mammoth nine-hour virtual live streaming dance party, which set the bar for the many crisis-inspired celebrity filled concerts and specials coming to TV and other viewing platforms in the weeks ahead.  He was joined by none other than J-Lo, Michelle Obama, Oprah Winfrey, Janet Jackson and Rihanna.  Presidential candidates Joe Biden and Bernie Sanders might be the last people you’d expect to see at an actual dance party but were reported to be “virtually” happy to have checked in.  D-Nice is doing great things with his Instagram, which he now refers to as #ClubQuarantine.

With the production of new episodes of its daily chat show Home & Family still on hold, Hallmark Channel is using its social media platforms to provide new and original content.  The show’s talented hosts and contributors are broadcasting live on Facebook Watch from their own homes, offering tips on everything from quick DIY projects to easy-to-make meals. 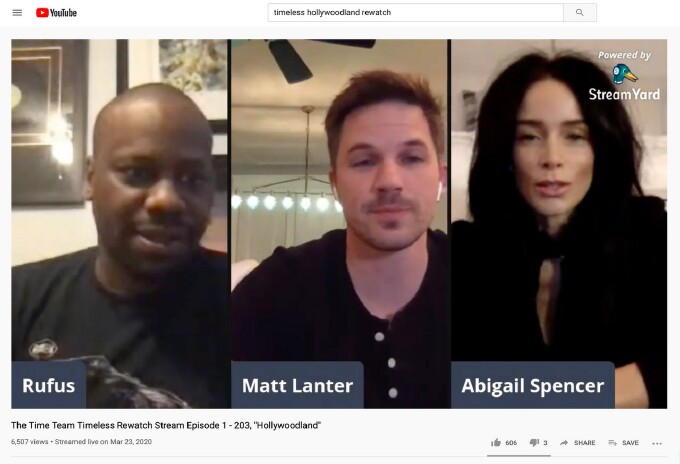 Despite being canceled twice, fan support for NBC’s recent time-travel drama Timeless was strong and the hashtag #SaveTimeless unstoppable.  Series stars Matt Lanter, Abigail Spencer and Malcolm Barrett recently took to YouTube for a special viewing party of a fan-favorite episode.  (Following a Twitter poll, the third episode of the second season, titled Hollywoodland was the viewer-voted choice.)  The series’ three leads contributed fun facts and lighthearted banter as the episode played, providing entertainment to the legions of fans still missing the series.  It was also a fun chance to see this obviously close cast reconnect.  Click below to watch.  NBC (or Peacock) could do much worse than to make a Timeless movie or two.

The Talk alumna Aisha Tyler is using Instagram Live to host Liquid Courage Happy Hour  (pictured at top), Tuesdays and Fridays at 5 p.m. PT.  Tyler is asking people to tune in for a lively question and answer session, and while she did ask them to refrain from asking anything about math, she said “science is totally fine.”  With each episode benefitting a different essential organization, like the American Red Cross, it seems a great way to spend some time and make and share a few cocktails with the star.

With no one sure when normality might be restored to production schedules, and more and more social distancing being encouraged, rest assured that more stars will be creating their own Guerrilla TV to make us all feel connected and not quite so isolated.