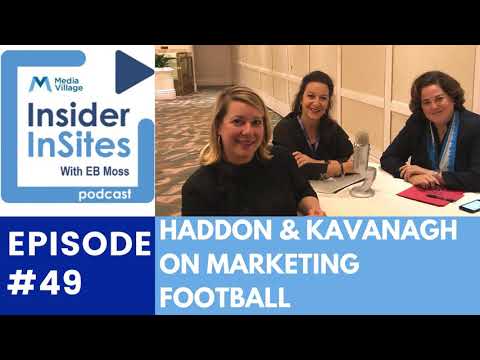 Fun fact: Julie Haddon, the NFL's senior vice president of global brand and consumer marketing, played Little League well before other girls did, and actually left her bat mitzvah party early to pitch a doubleheader. She went on to pitch audiences on films like Shrek for DreamWorks before marketing early-stage Twitter and financial disruptor, SoFi.

Hear how these two women ended up in football — and how they're advancing the league and the club, respectively, in Episode 49 of the Insider InSites podcast.

Haddon (pictured below right) is charged with bringing the brand to life across all touchpoints — from must-see Super Bowl ads and consumer activations to the mobile app. That means they support monetization and revenue goals, promoting everything from Thursday Night Football, The NFL Network and films, and all the marketing for commerce properties such as NFL shops to the expression of the brand via the creative.

Kavanagh's (pictured below left) media and marketing team is also "responsible for every single fan touchpoint that's out there, our brand, how it lives and breathes, how it grows and maintains relevance beyond just 16 football games a year, and then how we create compelling experiences that are good for the fan, the brand, and our corporate partners. Because, at the end of the day, we are a business."

These women have to navigate linebacker and quarterback style moves to get their jobs done on any given day. The following is an edited topline of how they do that, from a conversation conducted during last week's LA TV & Innovation Week. But there was so much discussed, you'll want to listen right through to the end zone, here, or where ever you download your podcasts: Apple, GooglePodcasts, iHeartRadio, Pandora, Spotify, Stitcher, TuneIn, and YouTube.

Moss: Julie, what was your path to knowing how to wear all of those hats?

Haddon: The NFL is like the culmination of the first two chapters of my career. I started out in sports and entertainment — working for the Dodgers then for Bobby Knight in Indiana. I went into product marketing, actually writing the back of baseball, football, and hockey trading cards, and got deep into content…. Then I moved into entertainment for DreamWorks....

Chapter two was the digital side; I wrote Meg Whitman, who I did not know, and said, "I want to work at eBay because I need to learn [about] the internet." After a few years at eBay I went [on] to be in charge of the mobile marketing unit for PayPal when we were just getting into mobile payments ... then [had roles] early in Twitter and SoFi.

In 2016 the former chief marketing officer of the NFL, Dawn Hudson, said, "We need someone who knows sports, who's entrepreneurial, and can get stuff done fast for ... the Super Bowl Women's Summit." And I've been at the NFL about three and a half years now.

Moss: Jen, you had a lot of entertainment experience but little in the sports world, right?

Kavanagh: Right. I started out developing websites and got one of the first SEO certificates that ever existed.... From there, I worked for a small agency, looking at the Internet as an efficient way to drive subscribership. [Then at] NBCUniversal, I headed up all of their digital strategy.... So, when this opportunity at the Eagles came up, it was not that difficult for me to understand the relationship between working in mostly unscripted programming, designed to engage on all platforms, with talent and storylines that needed to attract fans. 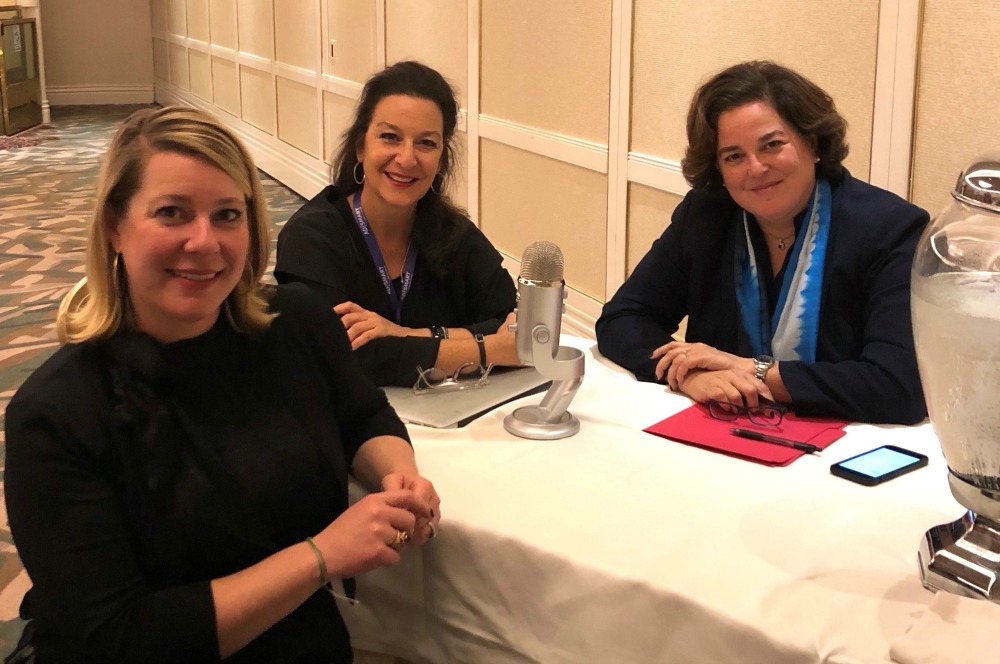 Moss: Brands today need to communicate their purpose; let's talk about what the league and the Eagles are doing.

Kavanagh: I think it's two parts: what's your responsibility as a brand in the world today and what's important to your fans, so you can align on your values to deepen that relationship.

The Eagles have been committed for years to Go Green and our stadium is LEED-certified. The Eagles Autism Foundation is also a big area of focus. It's a new brand that we created this year to basically capture everything we do in that space, which is primarily dedicated to bringing awareness to action.

Haddon: [On the League side], we create platforms that the clubs often participate in and initiatives that do really well with our younger fans who love to get behind brands that show that they care. In November there's a program called "Salute to Service," focused on military, for example; and December is "My Cause, My Cleats," which is one of my favorites, where the players design their favorite cleats [tied to causes]. We have about 655 players that are very active with us and, as stewards of our brand with helmets off, as leaders and heroes in society. What they bring to their local community is something that is a very important part of our marketing strategy.

Moss: Are we seeing attrition in terms of the youth fan base with the concerns around health and kids getting into the game? And how are you marketing to counteract any of that perception?

Kavanagh: Kids today have... mobile, e-gaming, social — all sorts of consumption choices. And we want to be where all our fans are. So, as we look at it from a standpoint of ushering in the next generation of fans, we have our linear games on ESPN, CBS, NBC, and Fox, and we have games on mobile, live streaming games like a Thursday night franchise where we're on Amazon, and we're on Twitch.

Haddon: We think about future-proofing our brand. We think about how [to] continue to bring in younger fans and make the game cool and authentic, and open up the players as advocates — like recently putting Ninja [a Fortnight gaming influencer] in the Super Bowl spot — and get influencers in the genres of fashion, music, gaming, and other stuff that young kids care about.

The game needs to be consumed a different way than [previous] generations. How do we find touchpoints that are relevant to pop culture that make the kids engage with our game and how to bridge generations? We kicked off part of that strategy with our Super Bowl spot, where you saw people like Mean Joe Greene alongside players like Saquon Barkley.... So, while my dad's favorite player might be Jim Brown, my kid's favorite player is Juju Smith-Schuster.

Moss: Jen, what are you doing that's innovative to appeal to a new fan base?

Kavanagh: We look at new and emerging platforms as ones that create a new opportunity to connect ... via original content that brings people closer to the game, the players, [and] the brand.... We've got a mission to entertain Eagles fans 365 days a year. And we're doing that on social platforms and on our owned platforms. We're creating original streaming content ... and we have seven original podcasts now that are doing really well. We [recently] created a TikTok account and really leaned into it, [not just] repurpose content from Instagram. We've generated over 30 million views.

Haddon: We all think about how to engage our fans the whole year. It's not just about September until February; it's about the Bowl games these incredible athletes are coming right out of, the draft in April, training camps, preseason starts, and [then] the whole season starts again. So, our job is to help showcase these athletes and their journey, [such as with] our campaign called "Know My Name...."

Moss: Conviva's Q3 report shows that NFL streaming scored a 77 percent increase in plays last quarter, up 50 percent year over year, led by streaming on mobile devices; streaming on PCs actually went down a little bit. Philadelphia, by the way, was a top-four Metro of all the teams for streaming consumption. How do you approach marketing the product differently there?

Kavanagh: Sports is one category that really punches above its weight in terms of mobile. The fact that people are consuming more video is likely a secret to no one. The league just recently launched their connected TV app, which gives us — by extension — the ability to offer more streamed programming inside of those SVOD environments that we know are key.

In terms of how we market them..., it's about not just plastering the same thing everywhere ... but really about being as personalized and thoughtful about what people want on which platform at which time.... It's making sure that you have clear definitions of what good looks like in each of those cases, and not measuring a mobile initiative using a linear KPI.

Haddon: And I think it's what younger fans want — to be able to access whatever content on whatever platforms. When you look at the fact that something like nine of the top 10 television shows are NFL, 38 of the top 40 are NFL live games, there's still an incredible demand for our product. It's the ultimate ground zero of reality TV.

Moss: To come full circle, Julie, it's the 100th Anniversary of the NFL, and [women comprise] 46 percent of the fan base and growing, especially in the younger set of women. How do you account for that and what are you feeling great about for the future?

Haddon: I'm feeling great that our fastest-growing segment is women and that, as with everything we do, we're making sure that we're inclusive as a brand.

Take a look at A Lifetime of Sundays. [Haddon was the executive producer of the documentary.] It's a story of the matriarchs of the Chicago Bears, the Lions, the Kansas City Chiefs…, and the Steelers. [It chronicles] football through the lens of these remarkable women. I mean..., Virginia McCaskey talks about how she bought the Bears for $100. Her father named the National Football League. She's 96 years old, and here we are in our hundredth season. It's just an incredible and informative story when you think about the plight that we have now as women executives, and think about what these women did in the 1940s, a true lifetime ago.