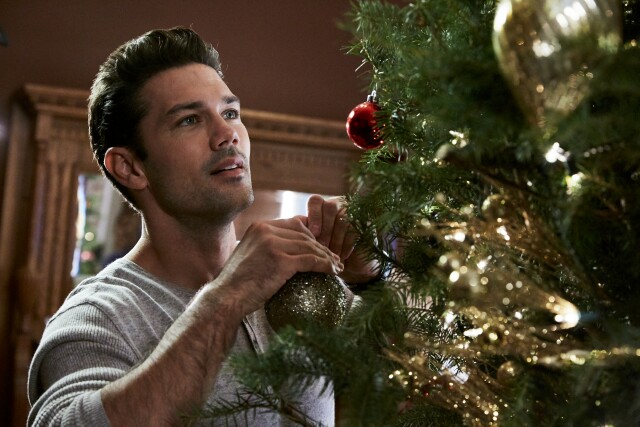 Hallmark heartthrob Ryan Paevey makes the switch from Hallmark Channel to Hallmark Movies & Mysteries Tuesday night with the premiere of Hope at Christmas, part of its Miracles of Christmas programming event.  Hope, co-starring Scottie Thompson, marks a few firsts for Paevey (pictured at top), best known to Hallmarkies for his starring role in two of Hallmark Channel's Mr. Darcy movies.  It’s his first film for Hallmark Movies & Mysteries and the actor told MediaVillage in an exclusive interview it’s a little different from his past projects.  “The easiest way to describe the difference is it perhaps speaks to a broader subject matter,” he explained.  “In this film, Scottie's character is divorced, and while her ex-husband is still in the picture [because of their daughter], he’s settled down with someone else.  So, there’s some mother and daughter talks about handling a new family dynamic.  My character Mac is a widower, so we do cover some different topics to the traditional Hallmark fare.  But I think what it covers is important because these are things that families really deal with.

“It was nice that it was a little different and definitely a part of the draw to do it,” Paevey continued.  “It's important to talk about this kind of stuff and film is one of the arenas in which we can visually (explore) these issues.  We get to see how these situations could play out.  This is my fourth Hallmark film and first Christmas-themed one, so now I’m part of the Christmas family.  At this point, I've covered all the seasons!  I'm just moving through the year here.”

Thompson’s character, stay-at-home mom Sydney, reassesses life after her divorce and decides to return to work, first interviewing with a New York advertising agency.  Before she can move on, though, there’s the matter of dealing with the sale of her great-grandmother’s rural home.  Returning to her hometown of Hopewell with her daughter Rayanne, Sydney encounters what she perceives as a would-be thief at the local bookstore.  Little does she know the perpetrator, Mac Howell (Paevey), is a teacher at the local school.  As the two continue to encounter one another, Sydney realizes she may have been hasty in her initial impression of Mac (who is also a writer and all-around nice guy).  As the two grow closer they each conclude that they are cheating themselves out of life by letting past tragedies dictate their futures. 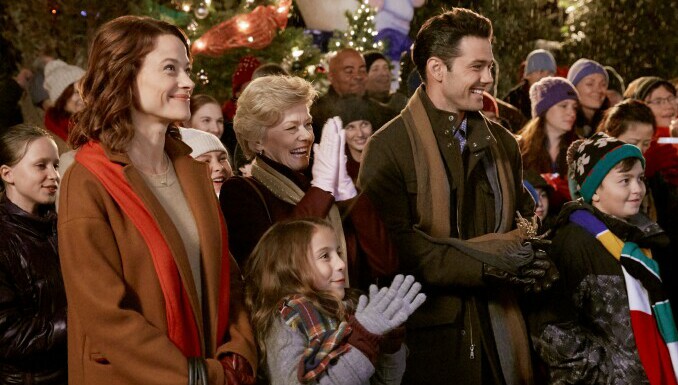 “We don't get off to the greatest start because of her being the paragon of justice,” laughed Paevey.  “But I had a blast working with Scottie.  We had a few days off before filming began, and being the crazy outdoor guy that I am, I wanted to do this hike I always do when I'm in Vancouver.  I invited Scottie as a teambuilding exercise and we really did have a blast.”  (Scottie Thompson is pictured above, left, opposite Paevey.)

Paevey also enjoyed sharing some tender scenes with young actress Erica Tremblay who plays Rayanne.  However, donning a Santa suit for them (another first for the actor) didn’t fulfill a lifelong ambition.  “Erica is super sweet and cute,” he said.  “She's like a little angel, and when she reveals her Christmas wish [to Mac], the Grinch heart grew about three sizes bigger.  I love kids and really am a giant child.  I'm literally what happens when you leave a child unsupervised for 35 years.  You get me, that's what you get!

Wearing a Santa suit “has never been a lifelong one for me,” Paevey continued.   “It was warm, shall we say?  Still, it became an interesting social experiment for me.  I'm on set with a ton of kids and had shot some stuff where I was just Ryan. Then when we shot the stuff with me in the suit.  It was no secret that it was me and all the kids knew that.  But as soon as they saw Santa their faces lit up anyway.  It was a trip and really did make me feel good.  I didn’t keep the suit, but I'd be happy to do it again.”

Currently, Paevey is restructuring his burgeoning jewelry business Fortunate Wanderer, investing in new tools and equipment.  His preference is to keep the business small and he is happy it’s “getting more sophisticated and the products getting better.”  He also had some good news for his Mr. Darcy fans.  “I don't have any specifics on new Mr. Darcy movies,” he shared.  “But I have been told there have been internal inquiries about another one and perhaps another Harvest Love.  Fingers crossed we’ll see more installments of both (franchises) in 2019 as I’d really love to intensify my involvement with the Hallmark family.  It's such a great place to work.  It's a great place to call home.”

Hope at Christmaswill be telecast Tuesday, November 20 at 9 p.m. on Hallmark Movies & Mysteries as part of its Miracles of Christmas programming event.