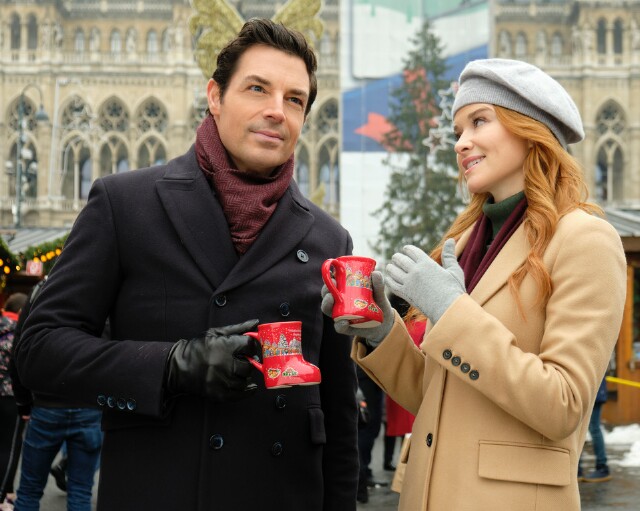 Last December, actor Brennan Elliott was awarded a unique Christmas bonus when the Hallmark Channel and Hallmark Movies & Mysteries fixture celebrated his 18th project (between the two channels) with an opportunity to work on location in Vienna. In 2020, a year largely devoid of bonuses for many, Elliott is thrilled to able to finally share Christmas in Vienna, co-starring Sarah Drew, with everyone. "Sadly, I didn't do [a Christmas film] in 2019," he explained in an exclusive MediaVillage interview. "I really wanted to, but it just didn't happen. Then I got Christmas in Vienna last December! I think I've done six Christmas movies now. Hallmark has been very kind to me, and I love working for them. Whenever they call, I just say 'yes' because it's always a wonderful time. I'm very blessed to be part of the Hallmark family. I know you probably hear that a lot, but they're just great to work with and to work for.

"I'd never been to Vienna, and was very blessed to have the opportunity," Elliott (pictured with Drew) continued. "I hadn't even read the script when they said, 'We're going to go to Vienna with this one.' I said, 'Okay, I'll do it!' They usually do one or two movies a year abroad, either in Europe or Fiji, or Rome like my Crossword Mysteries co-star Lacey (Chabert) did. Having never been, I'd heard such wonderful things from colleagues that had been to Vienna at Christmas. It just lifted the whole thing with the majestic opulence of it all." 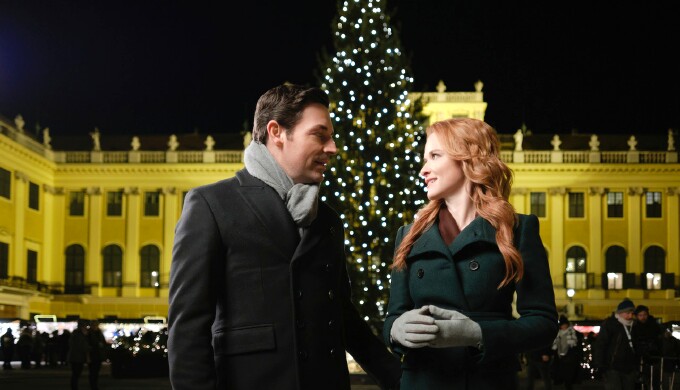 In addition to the film's location, the fact it was a modern re-telling of a beloved classic sealed the deal. "When you hear it's a [take] on The Sound of Music, a modern version with a lot of elements not in [the movie], on first reading it I thought, 'Oh man!' I mean obviously, Vienna is the main character in a lot of ways, but I'd also never played a politician or anything like that, and I whenever I hear someone say that I kind of go, 'Yeah it might be a little -- not fun.'

"But I related to several things with this character," he added. "One, was not being around his children. I connected with that. As an actor, I'm gone sometimes eight or nine months of the year and it can be tough on your family. Two, my wife went through an illness and treatments over the last few years. She's cancer-free now, but what I'm saying is fear. It's all about second chances. This [character] is afraid of getting hurt again and when you walk around going 'Oh my God everything's great and wonderful,' you can leave yourself room to be hurt because it could happen again.

"I drew a little bit of that because when I read it, I thought this could be a very sad experience. Then this [new] person comes in with music and life and really opens his heart again. Everyone has gone through that, whether it's a break-up, losing a job, or whatever, you can lose that passion. I found that subtextual element really interesting and personal. I always try to use what's personal to me to make it real. I loved that this guy was [kind of] a tragic hero. He's broken down and wounded, yet under the spell of Christmas, when your heart is broken, can you open your heart and fall in love again? It's the same for the Jess (Drew) character. It was a really beautiful story, the kids were great, and just a lot of fun."

Turns out that in addition to being a character in the film, Vienna in all its splendor provided a whole lot more. "When I got on set and saw the majestic, overwhelming beauty of this city it was so beautiful," he recalled. "They've rebuilt since the Second World war and the city felt brand new."

Elliott is thankful to have completed Christmas in Vienna before the COVID-19 pandemic shut down all productions. He's currently hard at work, opposite Chabert again, as the duo film the fourth and fifth movies in the Crossword Mysteries franchise back-to-back. The fact he "on-screen cheated" with his good friend and Crossword co-star Chabert has provided levity on set. "[Lacey's] had back-to-back movies with a couple other guys," he laughed. "So, what's good for the goose is good for the gander. We laugh about that. I'll ask, 'Who are you working with right now?' She'll tell me and I'll be like, 'Okay, well, just let him know to watch his back walking down a dark alley.' She'll say the same thing.

"It's really very funny," he added. "Lacey is one of my closest friends and when you do seven, eight, nine movies together it's like putting on a jacket that's so comfortable. I love working with other ladies, as I get a chance to diversify and find chemistry with other people. It's the same for Lacey. That's what's great about the Hallmark family. We collaborate. One day you're working with this person, the next day with somebody else, and everybody is great to work with.

"There's a new CEO holding the reins and I'm excited she's on board," Elliott said in closing. "I love the direction of where we're going with diversity and inclusion. They really listen to the fans, to the culture, and to what's going on. They really want to bring the best content possible to families and people all over the place and I love being a part of that."

Christmas in Vienna will be telecast Saturday, November 14 at 8 p.m. on Hallmark Channel as part of the network's annual Countdown to Christmas programming event.