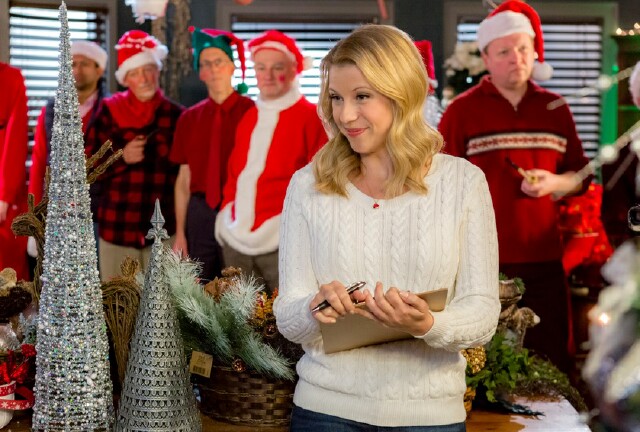 There's no denying it -- the reigning queens of Hallmark are Lori Loughlin and Candace Cameron Bure.  For a number of years now, the Full House and Fuller House stars have been permanent fixtures across many of Hallmark's most popular productions.  However, this holiday season, the queens are welcoming a dear friend and fellow FullandFuller House alum, Jodie Sweetin, with her Hallmark Channel debut in Finding Santa.  Sweetin tells MediaVillage exclusively that the movie did come with her co-stars’ blessings and she felt no pressure filling some big holiday shoes.  “I'm not sure if I'd call it pressure,” she laughed during a recent interview.  “It was at least something I was familiar with.  Candace and I actually saw each other while we were both in Vancouver.  She was there starting to shoot one of her mystery movies and I was there for my Hallmark movie.  So I got to see her a little bit.

“There was no big welcoming party,” she said of her entry into the Hallmark fold.  “I think we were all too busy working.”  But she was pleased when Cameron Bure offered her some practical advice.  “When she heard I was working with Hallmark she said, ‘You're going to have a great time.  What hotel are you staying at?  I know this hotel is really nice.’”

According to the actress, her turn at a Hallmark holiday movie was a long time coming and she is beyond thrilled about it.  “We've been talking for a long time with Hallmark trying to figure out a way for me to do one of their Christmas films in particular,” she shared.  “It just happened that this one fit into my schedule and I really liked the script.

“They sent it to me and all the pieces sort of fell into place,” she continued. “It's definitely something we've been working on for a while, but it was just so hard with my other schedule shooting Fuller House as well as Hollywood Darlings for Pop, but we finally made it work.” 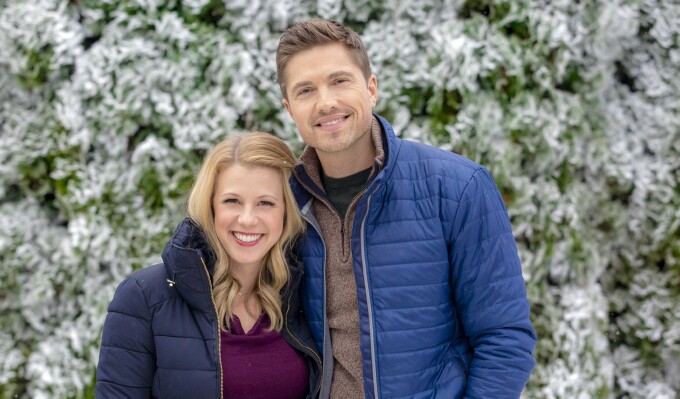 In Finding Santa, Sweetin plays Grace, a single woman who's been in charge of her small New England town’s Christmas parade since taking over her late parents’ Christmas store.  When her go-to Santa for the parade Tom injures himself in a fall, it becomes Grace's mission to find the perfect replacement.  She does so in Ben (Eric Winter, pictured above with Sweetin), Tom’s son.  However, Ben hates Christmas, so the challenge is, will Grace be able to inspire him to find some Christmas spirit and save the parade?

While this is Sweetin's first outing for Hallmark, it is not her first turn at holiday fare.  “I did the movie Defending Santa in 2013, with Dean Cain, so I've defended Santa,” she joked.  “I've now found him and at some point I'm sure I'll be losing him.  There's just so much Santa!

“But this was a very different experience,” she added.  “We shot [Defending Santa] over a hot Memorial Day weekend and it did not feel like Christmas at all.  For this at least we were in Vancouver, in October, and it was chilly so I didn't mind wearing three layers of clothes and a coat.  It was a more relatable experience."

With one Hallmark movie now to her credit, Sweetin is looking forward to the reaction, admitting there is a little pressure there.  “These movies are such a staple of people's holiday experience, and everyone really looks forward to them,” she said.  “I knew they were a really big thing; I just hadn't realized quite how big and popular they were with the fans.  It's only when I started talking about the stuff I'm doing with Hallmark that I found that people were so into them.  It's quite amazing the loyal fan base they have, especially for the Christmas movies."

Working as a producer on her Pop series Hollywood Darlings, Sweetin is also looking at broadening her horizons in the producing department, hoping Hallmark might be the perfect home.  “I'd love to be able to develop something with them as a producer,” she revealed.  “There haven't been any firm discussions, but I'd love the opportunity to do something for the Movies & Mysteries channel or even Hallmark Hall of Fame.  We just have to see what comes down next."

As Sweetin awaits news from Netflix of a Season 4 pickup for Fuller House, she’s busy filming season two of Hollywood Darlings and is about to take a Hawaiian vacation over the holidays with her two daughters, Beatrix and Zoie.  “I'm so looking forward to spending time with my kids on this 'Mommy and Me' trip,” she said.  “I work so much and I'm just happy to spend a week with my girls and have some fun.”