Halo, on Paramount+, Is a Videogame-to-TV Adaptation that Didn't Get Owned in the Process 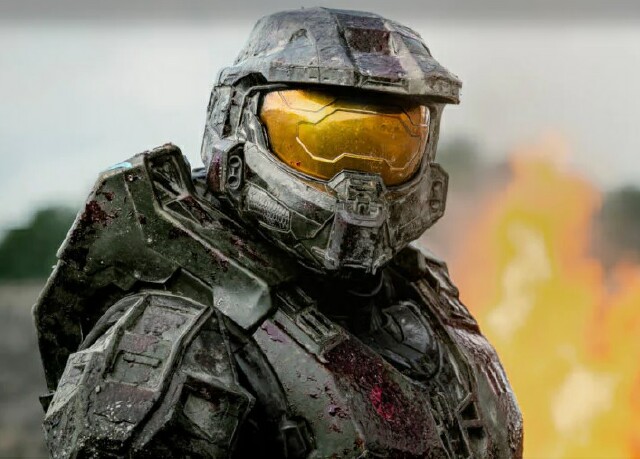 Ever since Microsoft's Halo: Combat Evolved was released on Xbox in 2001, the space marine-centric mega franchise has taken the gaming world by storm. The series boasted both a kickass combination of cutting-edge multiplayer gameplay and cinema-quality storytelling that was previously unheard of at the time. Over 20 years after that epic beginning, the Halo series has found new life on TV. Developed and written for television by Steven Kane and Kyle Killen, Paramount+'s Halostars Pablo Schreiber (Orange Is the New Black) as Master Chief, a mysterious UNSC (United Nations Space Command) super soldier who's also the poster boy for Earth's 26th century war, and for the first time ever, we actually get to see the face of our beloved hero. However, now that we're finally looking at what's underneath Master Chief's iconic helmet, the question becomes, did the studio hit its mark, or is this yet another failed game-to-live action convert?

For those who aren't familiar with franchise at all, here's the simple version: Master Chief, a genetically and technologically enhanced soldier known as a Spartan, fights for the human race against the Covenant, an alliance of alien races united by religious beliefs that revolve around the location and activation of ancient colossal ring-shaped structures referred to as "halos." While members of the Covenant believe the halos will bring their ancient forefathers, the Forerunners, back to the physical realm, in actuality the halo array is designed to wipe all sentient life from the galaxy in order to starve out an otherwise unstoppable species of space parasite known as "the Flood." In pursuit of this, the Covenant is in an all-out genocidal war with the Human race who, without Master Chief, would be utterly doomed.

The universe in the show is officially set in a slightly different timeline, so while many of the players, sights and sounds are familiar (if not identical), the storyline they're all appearing in is unique to this new series -- though I imagine they'll mirror major events pretty closely (not unlike Star Trek's new timeline in the J.J. Abrams films). In the game, players primarily experience the story through Master Chief's eyes; quite literally, in fact, considering it's a first-person shooter. In the series, however, Master Chief is not us, we're watching him in the third person, which is an aspect of the conversion from game to screen that I imagine influenced the decision to ultimately show his face. You see, in the games we never, ever saw our hero's actual face. Sure, as the franchise progressed there were some close shaves during a cut scene or two. We may have seen a close up of his hands dropping the helmet into frame, implying that his face was visible off-camera, and we've even gotten straight up shots of the back of his head, but not once in the span of 24 games has the Halo franchise had this much candor about the physical appearance of Chief's face, or his pre-military backstory, for that matter. This may also be why the show's narrative centers on MC's childhood memories and their apparent connection to "the artifact," which will eventually lead whoever has it to a Halo (though that much hasn't been confirmed on the actual series yet).

The opening episode feels slow at first, but don't get me wrong, by "at first" I only mean the first couple of minutes. Right after that, some Covenant elites show up -- looking for that "artifact" -- and proceed to plasma blast a group of high teenagers on a mining planet named Madrigal into literal chunks. No exaggeration. The lone survivor, Kwan Ha (played by Yerin Ha), gets away and warns the village she lives in on this outer rim colony planet, but her people end up being no match for these alien soldiers. Her village is massacred -- women, children, everyone -- but not before Master Chief and his three-Spartan squad, Silver Team, arrive.

This was the point where the connection between the game and the show first occurred for me. The action sequence that followed was long, exciting and packed with visuals and sound effects that were extremely reminiscent of the Xbox title's gameplay experience. There were even a couple of moments that went full first-person via Master Chief, again, just like in the game, and even though that's a well we hopefully won't drink from too often, it was still cool to see, especially right at the start of the series.

Fast forward -- we're three episodes in, and this most recent episode is the first appearance of Cortana, the A.I. in Master Chief's suit that's been with him since Combat Evolved. Her character is just as iconic as Master Chief's, if not more so, and to prove it, years ago Microsoft named their A.I.-based digital assistant (a la Siri or Alexa) after her. That's probably why the TV version of Cortana, while visually different, is still voiced by the actor who voices her in the games, the legendary Jen Taylor.

The show has its differences from the game series, obviously, but the spirit of it is still there. My concern, however, is the amount of time that we continue to see Chief's helmetless face. The Mandalorian, on Disney+, has already proven that a series can survive with a principal who's face we see maybe once every ten episodes, but it seems like Halo's determined to show us less and less of the iconic character in his full garb. In the third episode of the series, Chief didn't have his complete suit on even once. In fact, we saw him in sneakers. Then we saw him naked. I guess my concern is that the less we see of the suit, the more alienated some of the original property's fans will continue to feel. Kind of like what happened with Tony Stark in Iron Man 3, where he spent most of the film sans suit.

My point is, other franchises have fatally misinterpreted what aspects of these properties would successfully translate from gaming console to streaming services -- like Uncharted, a film that I imagine was cast by an A.I. programmed only to cause pain and confusion (Mark Wahlberg? How?). But I will say that the Halo team has been more "on" than "off" with their decisions. They've built real 360-degree sets, custom Halo body armor for Chief and his fellow Spartans, provided "bootcamp" training in Budapest for the Spartan actors, and seem to strive to match the cinematic quality of the games themselves, which, as mentioned before, has always been a standout aspect of the franchise.

I find myself intrigued by how far this whole thing will go, and I'm pleased to say that (at risk of dating myself) this is a videogame-to-TV-show convert that didn't get "pwned" in the process.