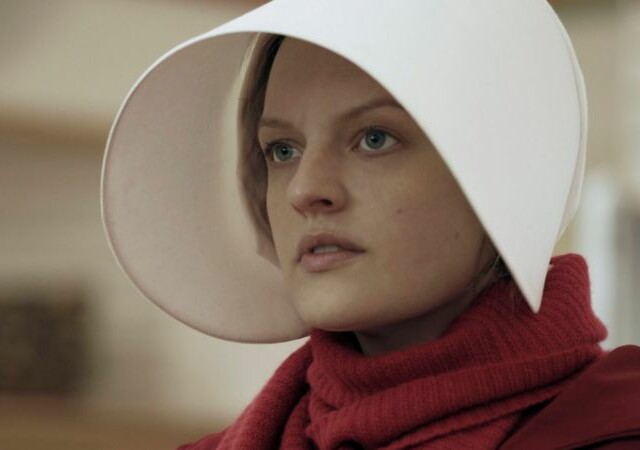 Streaming services rule this year among the 2017 Emmy Award nominees, with 91 for Netflix, 18 for Hulu and 16 for Amazon, placing all three among the top ten platforms in terms of total nominations.  While all three have much to be happy about and take pride in, this recognition is especially sweet for Hulu, which broke through this year in a big way thanks to the critically acclaimed drama The Handmaid’s Tale, which our own Ainsley Andrade described as “riveting” and “harrowing throughout,” and also as a “warning.”  (The Handmaid’s Tale, he said, “is here to warn us that we had better pay attention all the time and resist when necessary -- or maybe to keep us distracted while everything goes to sh*t.")  Among this new series nominations: Best Drama Series, Best Actress in a Drama Series (Elisabeth Moss, pictured above, the front-runner in the category), Best Supporting Actress in a Drama Series (Ann Dowd and Samira Wiley) and Guest Actress in a Drama Series (Alexis Bledel).  Regardless of how many awards the series wins come September 17 during the annual ceremony, July 13 will forever be an historic date at Hulu.

As always, there are a profound number of puzzling omissions from the nominees in major categories, though oversights are easy to understand in this era of Peak TV with its exponentially expanding roster of quality scripted series.  There are more than any mere human can properly process, not that any single human should attempt to do so; nor should any single human complain, because there are billions of us on the planet with tastes and interests diverse enough to justify the production of a few hundred different shows.  So it may not be fair to come down too hard on the relative handful expected to know them all, study them all and make the right decisions about them all, year after year.

That said, it’s always fun for critics, viewers and other industry observers to weigh in with their own opinions about what they got right and what they got wrong.  I’m not unhappy with any of the nominations – though, as much as I enjoyed it, I’m not sure why the streaming equivalent of a summer popcorn movie like Stranger Things on Netflix cleaned up with a whopping 18 nominations.  But even there, I’m hardly worked up about it.

My biggest gripe is the total lack of interest in IFC’s Brockmire, for my money the funniest comedy telecast during the nomination qualification period (June 1, 2016 and May 31, 2017).  Series star Hank Azaria gave the funniest, boldest comedy performance of the year.  His co-star Amanda Peet was deserving of a nomination, too.

Better simply to proceed with congratulations to all of the nominees and a shout out to those deserving individuals and series that were not included for reasons bigger than all of us.

The nominees for Outstanding Drama Series are House of Cards (Netflix), Better Call Saul (AMC), The Crown (Netflix), The Handmaid's Tale (Hulu), This Is Us (NBC), Westworld (HBO) and Stranger Things(Netflix).  I would have nominated FX’s The Americans, HBO’s The Leftovers or SundanceTV’s criminally ignored Rectify over Stranger Things or Westworld.  I consider the latter to be overrated, but I know I’m in the minority on that one.

The nominees for Outstanding Comedy Series are Atlanta (FX), black-ish (ABC), Master of None (Netflix), Modern Family (ABC), Silicon Valley (HBO), Unbreakable Kimmy Schmidt (Netflix) and Veep (HBO).  Sorry, folks, but with the exception of Atlanta, IFC's Brockmire was more deserving of a nod than any of the rest here, especially the silly Unbreakable Kimmy Schmidt and the tired Modern Family.  A nod for HBO’s sparkling new comedy Insecure over the already well-honored Veep would have been a pleasant surprise.

The nominees for Outstanding Actress in a Drama Seriesare Claire Foy (Netflix’s The Crown), Elisabeth Moss (Hulu’s The Handmaid’s Tale), Robin Wright (Netflix’s House of Cards), Evan Rachel Wood (HBO’s Westworld), Viola Davis (ABC’s How to Get Away with Murder) and Keri Russell (FX’s The Americans).  If only there had been room for Christine Baranski (CBS All Access’ The Good Fight) and Carrie Coon (HBO’s The Leftovers), both brilliant.

The nominees for Outstanding Actor in a Comedy Series are Jeffrey Tambor (Amazon’s Transparent), Aziz Ansari (Netflix’s Master of None), Donald Glover (FX’s Atlanta), Anthony Anderson (ABC’s black-ish), William H. Macy (Showtime’s Shameless) and Zach Galifianakis (FX’s Baskets).  Again, how Hank Azaria of IFC's Brockmire didn’t make the cut over at least a couple of these guys is the mystery of the moment.  Shame, shame, shame.

The nominees for Outstanding Supporting Actor in a Drama Series are John Lithgow (Netflix’s The Crown), Jonathan Banks (AMC’s Better Call Saul), Mandy Patinkin (Showtime’s Homeland), Michael Kelly (Netflix’s House of Cards), David Harbour (Netflix’s Stranger Things), Ron Cephas Jones (NBC’s This Is Us) and Jeffrey Wright (HBO’s Westworld).  Um, they nominated the wrong actors from Better Call Saul and Homeland, respectively.  Where the heck are Michael McKean (of the former) and Rupert Friend (of the latter), who both turned in career-best performances in their series this season.  Alternatively, they should have been recognized with the nominations that went to Harbour and Wright.