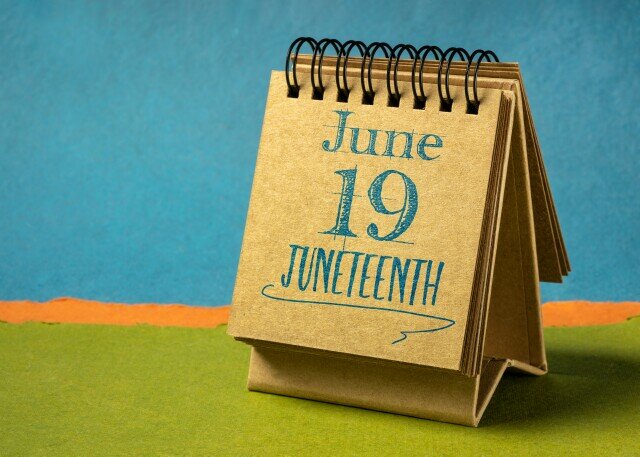 Yesterday, President Biden made history when he signed into law legislation that made June 19th a national holiday. Juneteenth, or "Juneteenth National Independence Day" as it's now called, celebrates the true end of slavery; that is, the day union soldiers finally informed the formerly enslaved in Texas that all slaves had technically been made free over two years prior. Today, what started as conversations fueled by an episode of ABC's black-ish and the death of George Floyd has resulted in actual, tangible change. "Great nations don't ignore their most painful moments," Biden said during the signing ceremony, but arguably, this one did for a long while. Only one thing truly helped this important milestone in American history gain the recognition it truly deserved, and that, my friends, was TV.

I'm always reading about how this holiday has for years been celebrated within the Black community, but I (embarrassingly) had no personal knowledge of Juneteenth or its meaning before black-ish. Yes, FX's Atlanta also had an episode called Juneteenth that was telecast the year before, but the holiday mainly served as the backdrop for a mostly tone-deaf celebration at a rich couple's home.

Before getting into the TV aspect of it all, I would like to say that the pace with which all these events took place is kind of fitting when you think about it. Feet dragged once slavery was abolished and it came time to inform the slaves of their newfound freedom. In Galveston, Texas, specifically, slave-owners "neglected" to inform the newly freed of said freedom in order to keep the free labor through one more harvest season. Ironically enough, Texas eventually established Juneteenth as a state holiday back in 1979, and was actually the first state to do so.

On the flipside of that, this holiday has been in place on some level since 1865, but it wasn't until that aforementioned special episode of black-ish that it started to get attention outside of the Black community.

Three years after that episode came out, the very public murder of George Floyd by now ex-Police Officer Derek Chauvin happened and became national news, and with that news came a wave of support for the Black Lives Matter movement and its fight against the unlawful deaths of Black civilians at the hands of America's police force. It was as if the country had been set ablaze. There was chaos in the streets as protestors and police officers squared off, all while groups of white supremacists -- pardon me, "white nationalists" -- spread the hate-filled rhetoric of their chosen leader, former President Donald Trump, all in the name of "Making America Great Again." The wall-to-wall television coverage was all-consuming. Of course, everything was made even more intense due to the COVID pandemic that this country also happened to be stumbling its way through at the time. So, obviously, labeling that specific, yet very recent, time in our nation's history a trying one would probably an understatement. 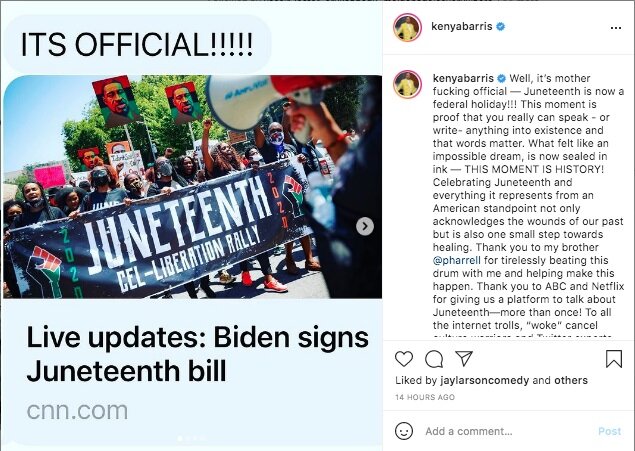 The point is the chain of events that led to this historic moment were media-laden and TV-fueled. Here's the Instagram post (above) that black-ish creator Kenya Barris put up no less than 24 hours ago about Juneteenth's momentous rise to federal holiday status. "This moment is proof that you really can speak -- or write -- anything into existence and that words matter," he said in the caption of his post, which was a screenshot of a CNN headline texted to him that said, "ITS OFFICIAL!!!!! Live updates: Biden signs Juneteenth bill." Barris went on, "What felt like an impossible dream, is now sealed in ink – THIS MOMENT IS HISTORY!"

There's a reason that Barris is able to celebrate this win as if it were his own personal victory, and that reason isn't just because he's Black. I mean, that has a lot to do with it, obviously, but a huge portion of his joy comes from the knowledge that his work had something to do with bringing this moment forth. If nothing else, I'd imagine Barris taking the most pride in the people he's managed to educate through black-ishabout the Black experience in America while still just making, like, a hilarious show. He has personal ownership over some of this win because the man earned it by, as he put it, speaking and writing it into existence.

So yes, this is definitely some kind of win for us, and we should definitely take pride in it. But the efficacy of this move as anything other than a symbolic gesture from Biden is definitely debatable. Actor and comedian DL Hughley tweeted sentiments of a similar nature, saying,"Wayment! They make #Juneteenth a federal holiday but don't want teachers to talk about slavery? So, when kids ask why they are celebrating, what do you tell them?" That's a great question, and I'm pretty sure the answer isn't states' rights.

One could argue that without Atlanta bringing the idea of Juneteenth back to surface of America's mind, and without black-ish educating us all on its history and meaning, this holiday may not have made it this far on the horrific death of George Floyd alone. If its new status as a federal holiday is going to become anything more than an empty gesture, however, maybe the honest education of America on actual Black history -- nothing white-washed or sugar-coated -- shouldn't only come from that same device I watch reruns of Ridiculousness on.

However you want to slice it, though, this is definitely a win. It's just not thewin. Regardless, I plan on celebrating. Happy Juneteenth!