Has Lifetime’s “UnREAL” Gone Too Far? 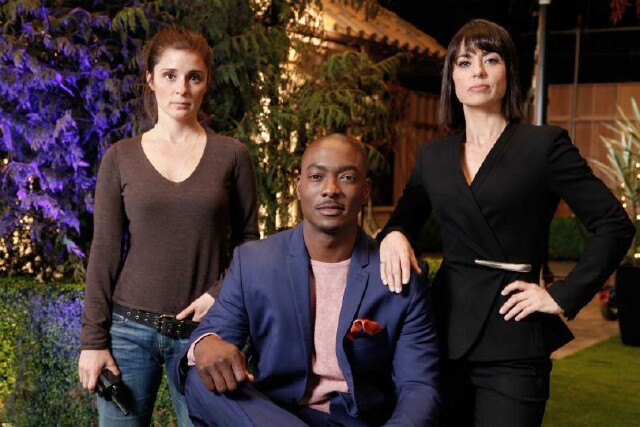 If you are a fan and have yet to watch or read anything about the July 18 episode of Lifetime’s “UnREAL” -- one of the most buzzed-about series on television, at least in media circles – then you should probably stop reading now and come back after catching up.   That's if you are still interested in the show, because a shocking plot turn in that episode may discourage smart, sensitive people from staying with it, unless next week’s episode somehow turns out to be the series’ best and most surprising yet. Given the inconsistent and largely unsatisfying quality of the show’s sophomore season, I don’t hold out much hope of that happening.

The urgency of the Black Lives Matter movement and the almost weekly stories lately of police officers killing African Americans – not to mention the horror of police officers being randomly gunned down around the country while protecting their communities -- makes the very idea of television producers initiating a highly combustible and wholly artificial "situation" between two black men and two cops to secure powerful footage for a silly “reality” dating show tawdry at best and irresponsible at worst. But that is exactly what happened in Monday's episode. And of course as tensions mounted -- with the cops not understanding what they had been lured into and the two black men not understanding why their car had been pulled over and their two female passengers acting drunk and largely out of it and the producers of the reality show freaking out when they realized they had created a potentially fatal shit-storm (because apparently they don’t follow the news) – the confrontation ended with one of the unarmed black men being shot and the other suffering the extreme aggravation of a back problem that could leave him paralyzed.

Perhaps viewers were meant to be somehow comforted by the fact that the man who was shot did not die; rather, he was lying on the ground with a gaping hole in his gut clinging to life while the other man, his brother, writhed in excruciating pain. Regardless, the general insensitivity of it all on the part of the writers and producers and everyone else involved with “UnREAL” boggles the mind.  (Lifetime did run a disclaimer at the top of the episode that read: "The following episode of UnREAL contains imagery and dialogue related to gun violence, race and law enforcement in America. On behlaf of Lifetime, our hearts and prayers are with the families and loved ones of those tragically affected by gun violence.")

“UnREAL” follows the behind-the-scenes exploits of the combative and wildly neurotic cast, crew and producers of a reality relationship show titled “Everlasting,” which is not unlike “The Bachelor” and “The Bachelorette,” except everything about it appears to be way more extreme. This series is a drama laced with comedy, much of it dark, but to the best of my knowledge it is not a satire like the 1976 Paddy Chayefsky cinematic classic “Network,” in which anything and everything was acceptable on television as long as it raised the ratings. One of the reasons “UnREAL” took off on arrival last summer and landed on so many critics’ Best of 2015 lists, including mine, was the great heart and character development that kept in balance the actual mishaps and atrocities that are all in a day’s work at “Everlasting.” The show frequently went right to the top but never over it. That was its singular genius.

But that hasn’t been the case this season, with new characters including B.J. Britt's heartthrob professional football player Darius Beck -- the first African American bachelor on "Everlasting" -- and most of the women desperately competing for his affections left largely ill-defined.

Last season, maniacal executive producer Quinn King -- played to Emmy-worthy perfection by Constance Zimmer -- busily kicked ass without ever becoming an unfortunate cariacature. In that sense, Zimmer was to “UnREAL” what Faye Dunaway in her Oscar-winning performance as programming executive Diana Christensen was to “Network.” The humanity of both women – battered but still strong, hardened but still heartfelt – always came through, especially with Quinn. But this season, not so much.

Shiri Appleby as Rachel Goldberg, the mentally ill young producer at ferocious odds with Quinn, is the only one this season who consistently rises above her material and brings something new to the show almost every week, just as she did last year. This previously underrated young actress has never been better. (Shiri Appleby, B.J. Britt and Constance Zimmer are pictured at top.)

The sudden fault lines that keep cracking its foundation haven’t been enough to turn me off to “UnREAL,” even if they have made it more of a mindless guilty pleasure than a smart, satisfying summer essential. But with this episode the show has been thrown into a narrative pit from which there may be no believable escape. If the shooting of Darius’ brother Romeo turns out to be just another plot development that contributes to the shattering of Rachel’s mental stability and makes life more difficult for Quinn and Company then the people responsible for “UnREAL” will have shown egregious disrespect for everyone impacted by the murders of black men by police officers and the violent acts that have sometimes followed that have dominated the news for the last two years. And then there's this less important but seemingly unavoidable concern: Can Rachel ever be forgiven for the disaster she put in motion purely for selfish reasons?

The only remotely realistic outcome would be for the network to instantly shut down “Everlasting” (because what network wouldn’t want to avoid thousands of protesters assembling outside its headquarters, not to mention dealing with the press and shareholders) and fire everyone involved, and for Rachel and her co-conspirator Coleman (the new executive producer of “Everlasting” this season) to become caught up in a very public trial during which they would have to explain their actions, and for Quinn to distance herself from all of this as soon as possible.

But if the storyline were to focus on any of these ideas, it would obviously be the beginning of the end for “UnREAL,” and I don’t see that happening, either.

That’s my way of saying I can’t imagine what the next few episodes of “UnREAL” will bring, but if the writers don’t properly finish what they started and give the situation they created the full respect it deserves the show will likely lose some of the unconditional love the press has been showering upon it since it began. The shooting of unarmed black people – or any people – by police officers is not an issue Hollywood should be screwing around with. Explore it fully and with great integrity and insight or don’t touch it at all.