"HIMYM," "Hart of Dixie," "RHOBH," "Hollywood Game Night" and a Lot of Snow Were Monday's Highlights 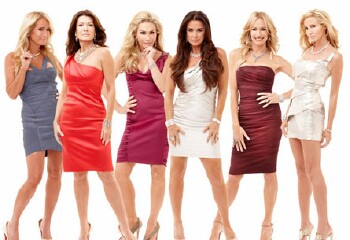 The Answer to Monday’s Trivia Question: I still get chills watching this clip of Al Michaels calling the Miracle on Ice US Hockey team game in the 1980 Olympics. "Do You Believe In Miracles? YES!" Enjoy!!!

While the A18-49 rating was down YOY for the Super Bowl, overall the show was the most viewed TV show in US History. 111.5 million people watched the game on Sunday. The Giants/Patriots Super Bowl, the former record holder, had 111.3 million people watching. On the household, the game delivered a 46.4 rating which was the same rating as last year.
In local markets, Kansas City delivered the highest rating with a 58.1 HH. Seattle came in 2nd with a 56.7. Denver delivered a 51.4 and New York a 50.5 (best since 1987).

Downton Abbey held its’ own against the Super Bowl and timing was perfect for people to switch over to it at 9pm if they wanted to. 6.8 million people watched it live. Pretty impressive, but the show rocks so I'm not that surprised.

How I Met Your Mother

Man they shoved a lot of nuggets into this episode. Nothing Mom oriented though, I guess we got a bunch of Mom stuff and now we wait again. It didn't matter because there was some much needed letting go that had to get done so that Ted would be ready for Mom when he meets her. Before Ted told Robin that he was still in love with her and that he was moving to Chicago, Robin told Ted who the gang thought were his 5 best and worst relationships. If you can name all 5 of his best or all 5 of his worst or all 10, you'll score some mega bonus points. Ted was also flashing back to some of the women on the lists trying to find Robin's locket. He spoke to Stella, Victoria and Janette (I just gave you 3 names) and it was Victoria who had it. Unfortunately she sent it to Janette who threw it over the Central Park Bridge in the first of the super cheesy special effects moments of this episode. The second one was when Ted let go of Robin and she floated away like his childhood red balloon best friend. Down the road a bit, a very wasted Barney was training 2 young guys on the art of meeting women. Strip clubs, a Tim Gunn suit and THE best pick up line ... "Haaaaave ya met Justin?" Grossest name of a strip club ever: The Crab Shed. Ewwwwww! When all was said and done, Barney gave the guys his playbook and never revealed his name to them making him legend-WAIT FOR IT-ary. The entire Marshall, ghost Lily, 7 years ago Lily and dead Dad thing was sorta stupid especially since we all knew they'd make up and never go to Italy. Extra points if you knew the Bangles tune playing at the end of the show.

Hart of Dixie
What, you may ask, was the big "thing" going on in BlueBelle's town square this week? Thanks to Dr. Zoey Hart, the Bluebelle Health and Wellness Challenge where everyone in town had to eat right and exercise to lose a total of 500 lbs. Cute idea to get Rachel Bilson and the other women in tight fitting gym clothes for an entire episode. Zoey bet Brick that if the town achieved their goal she would get her partnership back. Of course Brick knew that the town would never make the goal because Cricket moved up the Cake Festival. Of course Zoey freaked out and tried to get Cricket to change the date but she wouldn't because she bankrupted the Belles and needed the money. Okay so is being a Belle a job? Do the Belles do anything other than shopping, sipping and snobbery? How does one bankrupt a bankrupt group of women? Joel's book's main character has some issues so Joel decided to follow Wade around town and learn what a real man’s man is all about. Good news for me, he got to see Wade pick out an outfit which was really a great excuse for me to see Wade with his shirt off which we haven't seen in a while. Thanks writers. Good News/Bad News just before Valentine’s Day: LaVon and AB broke up. That's the bad news. George and Tanzy made out and will probably get back together in a few episodes. That's the bad news. Sugary sweetness which was what one needs to balance out the hour spent with cuckoo for cocoa puffs Carlton on “RHOBH.”

Real Housewives of Beverly Hills
I can't keep straight anymore who hates who, who loves who, etc. All I know is that this week Lisa and Kyle decided to throw a small intimate gagillion dollar birthday party at Lisa's house for Ken and Mauricio's birthday. Lisa, who has two restaurants of her own, needed Kevin "she she she" Lee the botoxed, puffy lipped party planner to help her and Kyle out. He did a beautiful job with the exception of these odd water dancers. You know what happens at dinner parties on this show...catfight. This time it was Kyle and Carlton and honestly Carlton was looking for a fight, she really was. She's completely manipulative and out of her mind. I don't even know why they invited her. Well...yes I do, ratings. Yolanda wasn't at the dinner party because she was at her step-daughter’s wedding and apparently none of the women were invited. Yolanda and Kim are both sending their daughters off to college. The two mother/daughter pairs couldn't be any more different. Yolanda bought 1000 dollars worth of bubble wrap and was packing everything up nice and neat while Kim and Kimberly were out getting matching butterfly tattoos. Joyce asked Carlton out for lunch to find out if she put a spell on her husband. Of course she denied it. Carlton was pissed at Joyce for even thinking she would practice dark magic. Joyce is an idiot who didn't know what the word "flippant" meant. Also idiotic, the names of some of these people. Lisa had her SUR staff working the party. Jax, Stassi and Schaena. What kind of names are these? I need to meet their parents.

Hollywood Game Night
I could watch “HGN” every night. Last night’ players were: Taryn Manning from “Orange is the New Black,” Donald Faison and Kaley Cuoco against Rosie O'Donnell, Chris Colfer and Penny Marshall. Rosie has lost a bit of weight but Penny's gained it all. I couldn't get over Penny Marshall and how terrible she looked. Rosie was a little too competitive and a little too loud but I knew she'd be good at the games, but Donald Faison was way better than she was.

-Top 5 commercials were:
Comedians in Cars Getting Coffee (Halftime)
Budweiser's "Puppy Love" (4th Quarter)
GoDaddy's "Bodybuilder" (4th Quarter)
Doritos "Cowboy Kid" (4th Quarter)
Toyota Highlander "Terry Crews and the Muppets" (2nd Quarter)
Viewers liked the commercials more than the game for the 4th year in a row.
Doritos has been in the top 5 for 8 years in a row.

-There were 20 :60 second spots in the game versus 14 in 2013.
-FOX aired 28 promos during the game vs last year. CBS aired 48.
-This year’s game was 55 minutes shorter than last year’s, but there was a blackout in 2013.
-Viewing for the half time show exceeded viewing of the overall game.
-Most re-watched moments were: The bad snap, the field goal following and Percy Harvi's kick-off return for a touchdown.

Tuesday's Trivia Question: Who became the first Olympic gymnast to score a perfect 10?

Send your Trivia Answer to Kristy at Kristy@watchingwaytoomuch.com.

oversees the investment and inventory management for all National media. Kristy has always had a passion for TV and started writing “TV News of the Day” in January of 2011 which evolved into Watching Way Too Much six months later. Kristy can be reached Kristy@watchingwaytoomuch.com.

Read all Kristy's MediaBizBloggers commentaries at Watching Way Too Much.

Media Manager Verizon Wireless Consumer Products Kristy Carruba began her career as an assistant buyer at DMB&B in 1988 and moved up through the ranks spending 20 years in the local buying community.  As Vice President of Local Investment and Ac…