Hindsight TV: Seth Meyers and Ted Cruz on Media, Politics and the Difference Between Satellite and Cable – Ed Martin 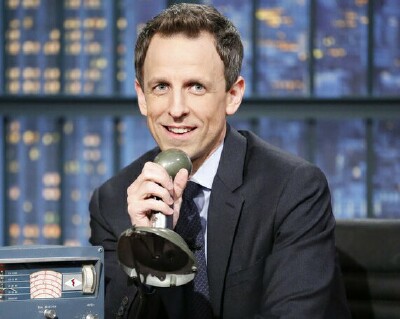 I have been known to complain about the broadcast networks’ tendencies to repeat recent installments of their late-night talk shows within a week or two of their original telecasts. But I was pleased last Friday that NBC offered a rerun of the March 16 edition of “Late Night with Seth Meyers,” which included among its guests Senator Ted Cruz, who on March 23 announced his candidacy for the Republican Party nomination in the 2016 presidential election.

I hadn’t seen his March 16 appearance on “Late Night” – indeed, I hadn’t even heard about it – but I was happy to have the chance given last week’s news. It might have been forgettable the first time around, but that wasn’t the case two weeks later.

Meyers may not have intended to do so, but on the show he exposed the crazy extent to which the media fans the flames of stories that are only partially true or simply not true at all. And he did such a good job interviewing Cruz and keeping the conversation civil and informative even when discussing topics on which they do not agree that I hope his show becomes an essential stop for all candidates from all parties during the next 20 months. 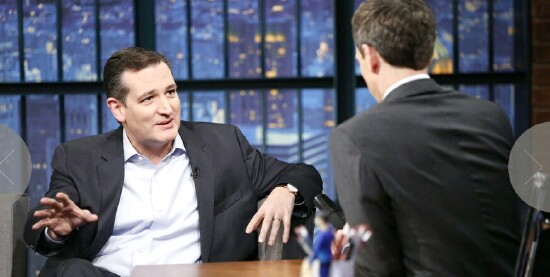 Just two days before his March 16 appearance on “Late Night” Cruz had been in New Hampshire “pre-campaigning,” as Meyers put it. Cruz and Meyers started their exchange with happy banter about the influence enjoyed by the Granite State (where Meyers is from) over politicians in general.

“When Senator Obama was on ‘Saturday Night Live’ in 2007, I went in his dressing room and I was talking to him and said, ‘You know, I’m from New Hampshire,’ and he stood right up!” Meyers recalled. “When you tell a politician you’re from New Hampshire it gets very exciting.”

The most interesting part of the conversation by far was when Meyers mentioned a moment that had been caught on video two days earlier (at the time of the original telecast) in New Hampshire. It showed “what the campaign trail can be like,” the affable host asserted.

“You put a scare into a three-year-old,” Meyers continued, before stopping himself and adding, “through no fault of your own.” He then said to Cruz, “Let’s take a look at this clip, because I did enjoy watching this.”

In the clip, which can be viewed by clicking on the image below, Cruz criticizes “the Obama-Clinton foreign policy of leading from behind,” calmly but firmly asserting that “the whole world’s on fire.” 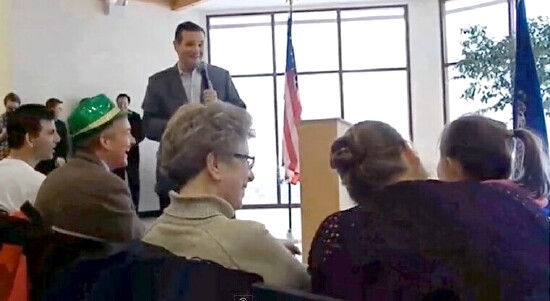 Immediately following the comment, a little girl in the room is heard worriedly repeating the phrase as a question. “The whole world’s on fire?” she asks.

It was at that moment that the clip ended, as it has when edited and presented elsewhere.

“The lesson there is you just realized kids are terrible with metaphors,” Meyers laughed.

“It’s interesting,” Cruz mused. “The next line that occurs after that is [me saying], ‘But your mommy is here and together we’re going to put it out.’ In the last 24 hours there have been 50 media stories that say, ‘Cruz Terrifies Little Girl.’ By the end of it I was Freddy Kruger. It was terrible.

“The funny thing is, it’s not true,” he continued. “I just talked to [the little girl’s] mom about a half-hour ago. She went on the radio this morning because she was so upset at all these stories. She said, ‘My daughter was incredibly happy. I said, ‘Look, Ted is going to put out the fire.’ And [the little girl] replied, ‘He’s a fireman?’”

“I do very well with the 3-6 demographic,” Cruz laughed, making a reference to his reading of Dr. Seuss’ Green Eggs and Ham during his infamous 21-hour filibuster to stop Obamacare. (There were applause and cheers from the studio audience when he mentioned that.)

Meyers jumped on the world being on fire thing, challenging Cruz’ stand on global warming and noting that 2014 was “the hottest year on record.”

“At first I thought you were coming around on global warming, but that’s not the case, right? Because I think the world ison fire,” he laughed. (This time the studio audience virtually roared its agreement.)

“It’s interesting you say that,” Cruz replied. “I just came back from New Hampshire, where there is snow and ice everywhere, and my view actually is simple. Debates on this should follow science and should follow data. Many of the alarmists on global warming have a problem because the science doesn’t back them up. And in particular, satellite data demonstrates that in the last 17 years there has been zero warming. None whatsoever.

“Do you remember how it used to be called ‘global warming’ and then magically the theory changed to ‘climate change’?” he asked. “The reason is, it wasn’t warming. The computer models still say it is [but] the satellites show it is not.”

Meyers didn’t let Cruz’ comment go by. “Are you saying you trust satellites more than computers?” he asked. “Because I have DirecTV and I would rather watch on my computer. Because when that thing [DirecTV] goes out …” he laughed, not finishing his thought.

“Cable shows that it’s not warming, either,” Cruz said with a smile.

At the interview’s end, Meyers broached the subject of Cruz officially declaring his candidacy, unaware that he would do so exactly one week later. “This is too small a show to announce on,” he cautioned, suggesting that when Cruz make the announcement he do so on Fox’s “Empire.”

“Everybody is watching that show,” Meyers said.

Cruz missed his chance during the two-hour season finale of “Empire,” which followed two nights later and was one of the highest rated primetime programs of the year to date.