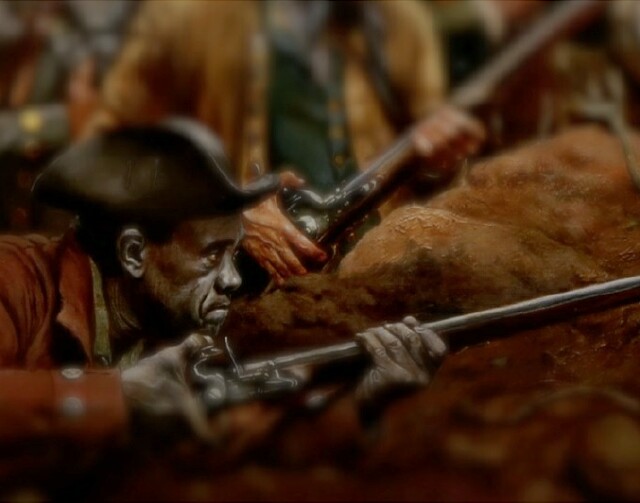 After writing my review of Washington, HISTORY’s docudrama about America’s first president, I figured I’d keep the edutainment going with another special.  Black Patriots: Heroes of the Revolution, on the same network, is narrated and executive produced by retired NBA legend turned history buff/author/activist Kareem Abdul-Jabbar, and coming so soon after Washington it brings us right back into the divisive and formative time in our nation’s history known as the American Revolution.  This time, however, the stories being told are about the people of color whose heroism had previously been left unsung, and whose efforts not only laid the groundwork for America’s independence, but for the independence of enslaved people as well.  My only real question is … why just the one episode?

Abdul-Jabbar has done us all a service in doing his part to create this hour-long special that provides more information about the pivotal accomplishments of black folk during the birth of our nation than any of the textbooks he was reportedly afforded in the Fifties and Sixties (or that I was afforded in the late Nineties and early 2000s for that matter).  Black people were one-fifth of America’s population back then, yet our place in both society and history has been continually minimized, almost to the point of omission at times.

Black Patriots sheds light on some of the forgotten souls that helped make this “the land of the free,” and to do so Abdul-Jabbar enlists expert help from Adrienne Whaley, an educator from the Museum of the American Revolution, as well as Professors Graham Hodges, Douglas Egerton, Erica Armstrong Dunbar, Christopher Bonner, Christopher Brown and Margaret Washington of Colgate, LeMoyne, Rutgers, the University of Maryland, Columbia and Cornell, respectively.

This special was beyond enlightening, and while I fully intend on name-dropping the hell out of some black heroes before this is all over, I’d like to talk about the differences between this program and HISTORY’s Washington.  Besides the fact that both specials are infinitely relevant to one another, they also have the same network as a home, even if completely different people produced them.  They also share a similar format and cover basically the exact same time period.  So, why is it that Washington is a six-hour limited series while Adbul-Jabbar’s special boils down to approximately 45 minutes if you eliminate the commercials?

I understand that there are many different cogs in the machine that takes anything from concept to completion, especially so when it comes to television, but I still can’t help but feel that Black Patriots would have been served immensely by the addition of a couple more hours, some actors and some light VFX work.  Basically, a bigger budget.  What we did get had more useful, accurate and clearly conveyed information per minute than its average counterpart, which is the important part.  I just wanted … more.

What I find most interesting is how this information is being disseminated.  I didn’t grow up in one of those “the Civil War was about States’ rights” states.  I grew up in New York, and while this state is definitely one of the most progressive places in the country, the scope surrounding Black history has always been pretty limited.  I am 32 years old, and in the past six months I’ve learned more about real life black history from television than I think I’ve ever learned in an actual school.  Again, I know there are a lot of moving parts, blah blah blah, but this is still an indictment of the American public-school system.  My children are too young for high school level American history, but I wonder what they’ll be taught when it comes to history’s heroes of color.  Maybe I should DVR this stuff.

The point is, if it weren’t for this series, I wouldn’t know it was the death of Crispus Attucks at the Boston Massacre that set the revolution into motion, or that Peter Salem killed a key British officer (a Major) during the Battle of Bunker Hill.  I wouldn’t know that in 1773 Phillis Wheatley became the first African American, the first enslaved person and the third woman ever in American history to publish a book of poems (which was huge, because back then most white people couldn’t even read), or that Titus Cornelius -- a.k.a. “Colonel Tye,” who was a loyalist to the British Army in exchange for his freedom -- used said freedom to straight up terrorize his previous owners and colonists who had done him wrong when he was a slave (which is awesome).

I know these things now, but I should have known them already, you know?  It seems this information has been altered, or altogether withheld from me my whole life, probably because, as Abdul-Jabbar says in the special, “The legacy of slavery certainly is something that a lot of white Americans are uneasy with.”  Regardless, it is available now, even if we are a little late to the education party.  Don’t get me wrong -- George Washington Carver and Harriet Tubman are legitimate O.G.s of black history.  But people like James Armistead and Elizabeth Freeman deserve some shine, too.  Now, thanks to HISTORY, Kareem Abdul-Jabbar, and many others, they’re finally getting it.