HISTORY's Moment in Media: "It's The Late Show with David Letterman!" 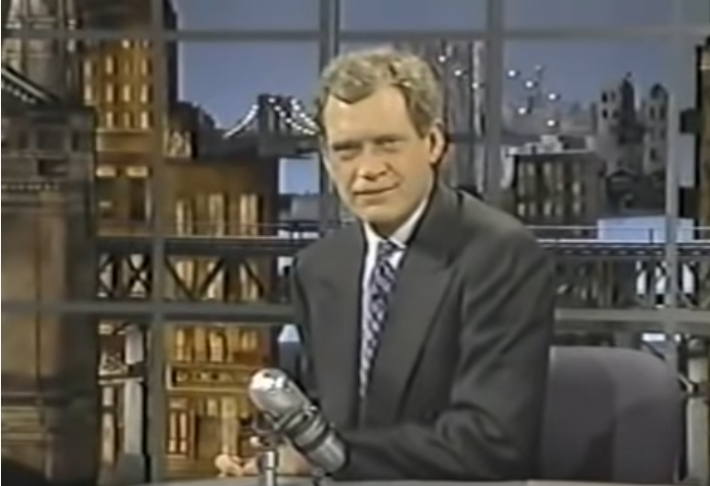 Twenty-six years ago this month, on August 30, 1993, David Letterman made his much-anticipated debut on CBS. He had hosted Late Night on NBC for 11 years and then lost out to Jay Leno in the bitter battle to ascend to Johnny Carson's Tonight Show chair.

It was a pivotal moment in the history of network television: It not only marked the end of Carson's 30-year tenure behind the Tonight Show desk, but it also represented the first time CBS attempted to compete in late-night TV. NBC had dominated that timeslot since Steve Allen's Tonight tenure in the early days of television and ABC had developed a late-night news franchise with Ted Koppel and Nightline starting in 1980. After Letterman lost the Tonight job, CBS saw its chance.

At the time, according to former New York Timesreporter Bill Carter, who extensively covered the late-night wars, the networks earned more than $70 million in profits from late-night — the equivalent of more than $125 million today.

The race to succeed Johnny was a comedy of its own, pitting two late-night superstars who'd dreamed of the job against each other — after they'd come up together and boosted one another's careers. It involved a story secretly planted in the New York Postby Leno's manager, suggesting that NBC wanted Carson out, which led Carson to blindside NBC with his retirement announcement. And it eventually included Leno hiding in a copier closet in Burbank to eavesdrop on a high-level conference call about his future.

At Late Nighton NBC and in his earlier talk shows, Letterman's persona was that of a wiseass little brother. He invented, or at least personified, a generation of ironic comedy that commented on the media, even as his show was a part of it. At NBC, he developed signature goofy segments like "Stupid Pet Tricks" and he often found comedy in the mundane, just by being himself in unexpected situations. When General Electric bought NBC in 1986, a camera followed him to GE headquarters, bearing a basket of fruit. His attempt to deliver it to executives yielded a genius bit of rebellious, smart-aleck comedy.

On CBS, though, he was expected to turn into a grown-up. The network bought back the theater from which Ed Sullivan had hosted his show and lavishly renovated it for Letterman. Paul Shaffer's "World's Most Dangerous Band" was upgraded to the "CBS Orchestra." Letterman stayed goofy, but he also became more serious. Politicians came to visit. He became known as a great interviewer. He was considered a funnier comedian than Leno. But, for most of the two decades and change they competed against each other at 11:30 p.m., Leno had the better ratings.

Letterman probably wasn't happy about that because he was always unhappy. But when he retired from CBS in 2015, he went out the way his hero Johnny Carson did — as an idol. And, more important for the business of television, in a landscape where many rivals to Tonight to come before him — Joan Rivers, Arsenio Hall, Chevy Chase — had failed, Letterman built a Late Show franchise that lasted, and that he could turn over to a successor. And that successor, Stephen Colbert, who regularly beats Leno's successor, Jimmy Fallon, in the overall ratings, last season beat him in the adults 18–49 demo, too.