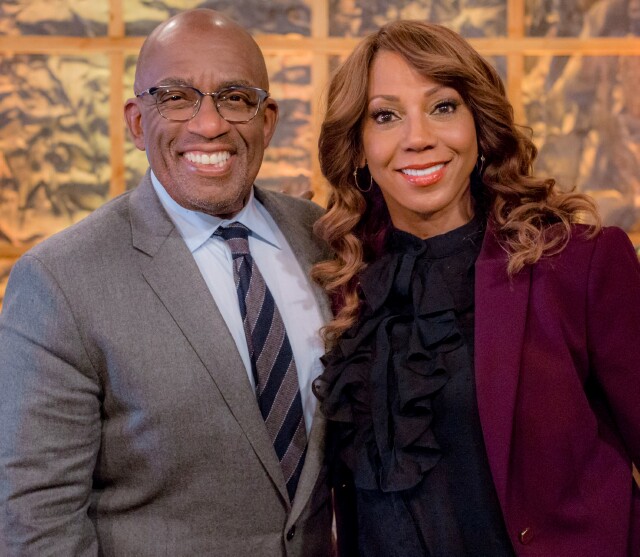 After 30-plus years in showbiz it's nice to see that Holly Robinson Peete is still smiling.  In a business often known for having unreal expiration dates, the actress is thriving.  She has a new home at Hallmark Channel for her family based reality series Meet the Peetes [formerly known as For Peete's Sake on OWN] and is the latest member of the ever-expanding Hallmark Movies & Mysteries arm of the network, starring in Morning Show Mystery: Mortal Mishaps, based on a novel by Al Roker.  (The two are pictured above.)  "Yes, I'm working with Al, who is a very good friend," Robinson Peete said during an exclusive MediaVillage interview.  "We do go way back and have a lot of history together.  He's like family, really.

"We were looking for projects at Hallmark Movies & Mysteries and trying to figure out what we wanted to do," she continued.  "Al had these great books that were optioned but the lead character in his books is a man.  I was like, ‘I could play a that character!  Why not?’  So, with the stroke of a pen Billy Blessing became Billie Blessing."  (Editor’s note:  Roker discussed his novels and his work with Hallmark productions last year in a Lunch at Michael’s interview with Jack Myers and Ed Martin.)

In the movie (premiering Sunday), Billie Blessing is a TV chef and restauranteur who unwittingly finds herself the prime suspect in the murder of a morning show’s executive producer, just moments before he was to announce the name of the show’s new co-host.  Because one of her signature cakes had been delivered to the victim in her name -- and was laced with cyanide – Billie becomes a prime suspect, and handsome Det. Ian Jackson (Rick Fox) keeps a watchful eye on her.  It's up to Billie to figure out who added the secret ingredient and clear her name.

Given her tenure as a co-host on CBS's chat-fest The Talk, Robinson Peete thought the movie's backdrop was ideal.  "I love the setting of the talk show, which I've had some experience in," she noted.  "It was just the perfect vehicle, conceptually and having the ability to work with Al and the ability to go back to my roots and work in Vancouver, which is where we shot 21 Jump St.  I just feel like it’s a full circle moment and I'm really excited for it to air."

Like many, Robinson Peete finds the passage of time since debuting on 21 Jump Street way back in April 1987 hard to believe.  Her residual checks reflect it.  "They're down to about $1.50 now," she laughed.  "So that's how long I've been around.  With 21 Jump Street we were the first show on the Fox network.  We were their first real drama, it was us, Married with Children and The Tracey Ullman Show."

Today Robinson Peete is crediting that time as a blessing and the reason Hallmark is a perfect second home.  "With this network, you see how they treat their talent with a real appreciation," she revealed.  "After doing the Christmas movies (Christmas in Evergreen and Angel of Christmas) I just wanted more and the discussions opened.  I got into the movie side of the business, then at the same time our show came up as a free agent so why not continue telling our stories on the Hallmark Channel?”

However, Robinson Peete did get some great advice from another Hallmark fave, Lori Loughlin, before signing on the dotted line.  "I've known Lori since the ‘90s, since we worked right next door to each other on the Warner lot doing Hangin’ with Mr. Cooper and Full House," she laughed.  "So when the discussion about Hallmark came up I called her and she said, ‘You will love it here.  It's a perfect fit for you."  Then she explained how they love us ‘90s stars and treat us so well.  I was in!  I joke with Lori that I'm following her playbook and I'll be the brown version of Lori Loughlin all day long."

With her friend’s classic series Full House enjoying reboot success as Fuller House on Netflix, I couldn't resist asking how Robinson Peete felt about a 21 Jump Street reboot.  "I think we have a better chance of doing a Hangin' with Mr. Cooper reunion than to get Johnny Depp to play Tom Hansen again," she laughed.  "He pretty much told us what he thought of that character in the first 21 Jump Streetmovie when they viciously killed off his character.

"But I have been nudging the producer of Hangin' with Mr. Cooper,” she continued.  “He's [also producing] Fuller House, so I'm like, ‘Can we reboot?  Call Raven (Symone), call Mark (Curry), let's do this!’  I would be totally down for that.  We're about to celebrate the 25th anniversary of the show this fall, so why not?  Still Hangin’ with Mr. Cooper … what do you think of that?”