How Brands Will Win the Super Bowl of the Future 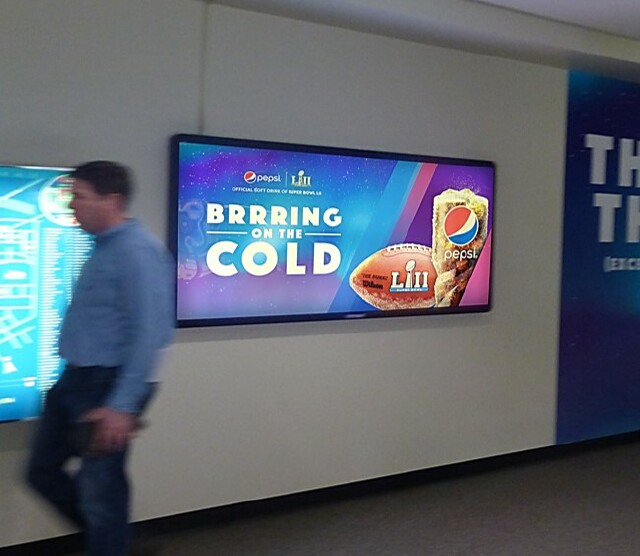 Earlier this month, Outfront Media partnered on an out-of-home (OOH) campaign with the audio streaming service TuneIn so that football fans in Times Square could get real-time updates on the playoff scores leading up to the Super Bowl (photo below).  The campaign really speaks to the immediacy of OOH advertising, and I started thinking, our medium has come so far in such a short period of time -- what will the winning Super Bowl campaigns of the future look like?

In 2017 brands spent 385 million dollars on their Super Bowl ad spend alone.  This year the price for a 30-second commercial spot is holding steady at an average of five million dollars. With brands investing so much each year in the Super Bowl, marketers are looking for ways to activate consumers beyond television spots and create memorable experiences that last well beyond the Big Game.  With that in mind, what kind of ads and types of technology will be the gamechangers of the Super Bowl campaigns of the future? 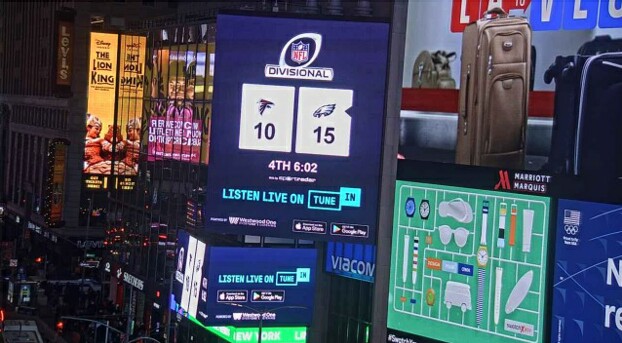 It’s incredible to think that the first AR OOH campaign just launched in 2016.  Since then, Snapchat has becomea leader in AR with brands spending anywhere from $300-700k for their own custom filter.  In fact, last year, Gatorade brought back the infamous “Gatorade dunk” with custom Snapchat filters at the Super Bowl, garnering millions of plays and impressions at the largest sporting event of the year.

So, how can brands partner with OOH and use AR in creative campaigns?  We  recently partneredwith Dogology, a dog training app that our creative studios designed.  Our OOH billboards advertised the app and how it worked, and then the app itself used AR so that you could practice dog training in different environments with a dog avatar. When AR and OOH campaigns are used effectively together, consumers not only imagine what your product could feel like, they actually get to experience it themselves.

As for leveraging AR and OOH in the Super Bowl, I can imagine a world where you can use a brand’s filter and AR capabilities to look as if you were at the Big Game yourself by taking a photo in front of a unique OOH billboard.  Even if you’re not lucky enough to be seated in the stadium during the Super Bowl, at least you can look like it!

Social Good for the Win

Last year we saw that some of the most successful Super Bowl themed ad campaigns have social good messaging.  Airbnb had one of the most notable ads during Super Bowl LI, with their #weaccept campaign pledging to provide short-term housing to 100,000 refugees over the next five years.

We are seeing a continuation of this trend this year.  The ads grabbing all of the headlines are from brands willing to put a stake in the ground and own an issue.  In some cases, brands are inserting themselves into political or controversial topics, while in others, like Stella Artois, brands are teaming up with celebrities and announcing a clean drinking water initiative — causes everyone can get behind.  This reminded me of an award-winning billboard that actually produced water for those in need.  Expect to see more social minded OOH advertising in the future.

The Super Bowl is a time to get together with your best friends and get real over nachos and beers.  With that in mind, the types of ads that are gaining more and more traction are the ones that don’t showcase unrealistic, unattainable lifestyles or ideals.

Since 2011, the National Advertising Division has banned ads that aren’t accurate representations in cosmetics.  Then, in 2014, there was the introduction of the Truth in Advertising Act bill, which raised consciousness around photoshopping in advertising and has made it a hot-button topic. Since then, cosmetic companies like CoverGirl have pledged not to use photoshopping in their advertising and industry leaders are following suit.

Airbrushing is out, and real Americans are in, as CVS has recently capitalized on.  Earlier this month, the industry leader announced that they would no longer be photoshopping their ads. This trend is here to stay: Americans don’t want their ads retouched!

We’ve seen how popular interactive ads have been in the Super Bowl in years past. Take the classic example of the viral Doritos “Crash the Super Bowl” contest, which attracted  millions of participants.  This year Tostitos is taking creativity to a whole new level with their digital invite creator which allows football fans to send ridiculous, GIF-filled invites to their Super Bowl party.  Now that is an out-of-the-box branding idea!

Interactive campaigns are a huge win in OOH advertising, as well.  We’re seeing higher engagement rates with OOH ads that integrate with excellent social media campaigns, so users can snap a photo of the ad on their Instagram or Facebook and share with friends.  Never underestimate the power of a strong visual; the OOH advertisements that are going viral are the visual stunners that your audience wants to be seen in front of.

PepsiCo’s recent Super Bowl push is a great example of successful interactive and cross-channel advertising.  In addition to their yearly Super Bowl Sweepstakes, the brand introduced a video series called “Game Day Grub Match” which pits fan-favorite retired football players against each other in a cooking competition using Pepsi products.  As part of PepsiCo’s sweepstakes, fans were encouraged to submit 60-second clips explaining why they should win tickets to the Super Bowl, and the winner not only got game day tickets, but a chance to be Vox and SB Nation’s social correspondent at the game. 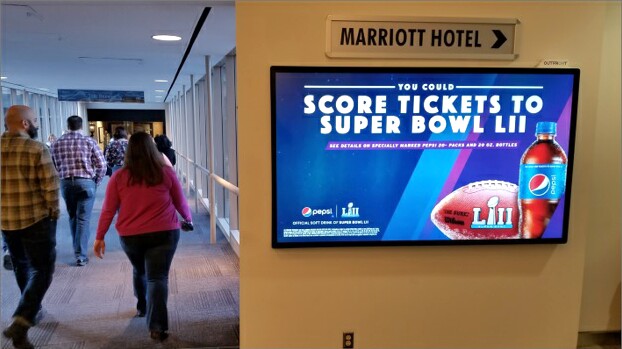 For another example of how advertising can be more interactive, you can look at the popular trivia game HQ (which MediaVillage raved about back in November).  The game just reached 1 million users, which reveals the potential for just how powerful ads can be the more interactive that they are.  To take the HQ idea farther, a future could exists where brands leverage OOH to quiz their fans and do trivia in real time to boost engagement at the game itself.

The GOAT of all GOATS (Sorry, Brady!) -- Limited Edition Branding

Whether your team is playing in the big game or not, releasing limited edition memorabilia to remember the big event is a creative way to get consumers get in on the game.

Skittles left a lasting impression with their limited edition “Seattle Mix” packs of candy.  The first time Skittles ran limited edition packs for the Super Bowl, they auctioned off three different packs for the Marshawn Lynch's Fam 1st Family Foundation.  After seeing success with their first campaign, they ran a similar campaign the following year, this time doing a giveaway in Seattle of free packs of Skittles for Seattle Mix Super Bowl XLIX.  What a sweet way to connect with an audience.

Budweiser recently released limited edition bottles to commemorate Super Bowl LII.  In addition to releasing these striking new bottles, Budweiser has pledged to give the entire city of Philadelphia free Budweiser if they win their first Super Bowl.  Talk about an innovative way to celebrate and make a statement. 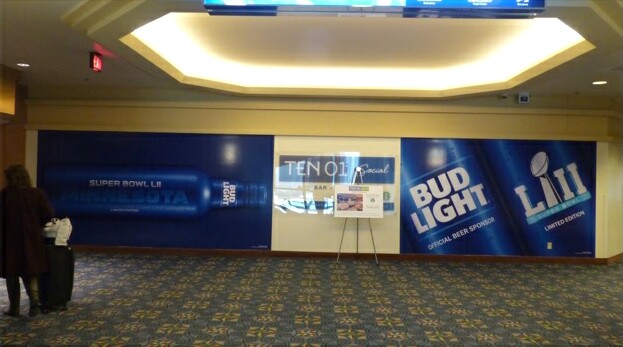 In the future expect brands to create limited edition Super Bowl memorabilia that, like Happy Meals, create collectibles that are part of a must-have series.

The future of Super Bowl advertising has so much creative potential.  We’re seeing tech trends like AR and interactive campaigns score, photoshop get traded, and themes concerning “social good” reign as champions.  Who knows?  Maybe one day footballs will dream of electric sheep.  (Baaaa, what?)  Until then, pass the wings and the guac and I’ll see you at the game!