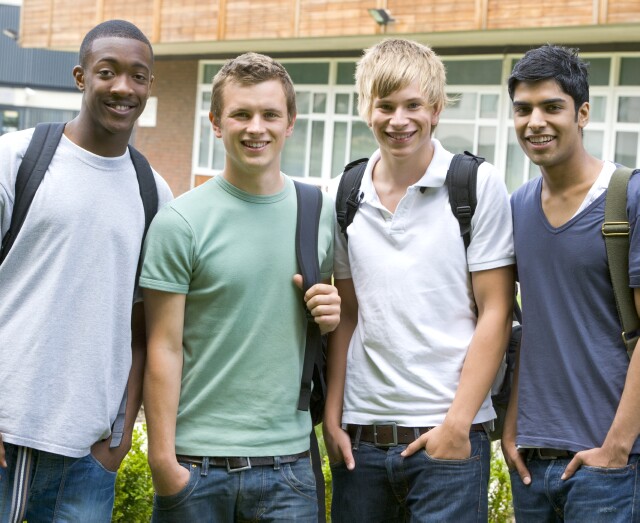 From Star Wars to Moana, strong female characters dominate every genre and category of mass media.  Today's female protagonists are confident and capable.  They enjoy many of the positive qualities of past female leads -- empathy and kindness -- but also the courage and ability to kick butt that once escaped the princess in peril narrative.

Meanwhile, girl power stars' male counterparts largely provide comic relief or emotional support, with a few notable exceptions.  While many applaud these diverse images of masculinity, others worry about the impact a general lack of "strong" male characters could have on Gen Z.  Among actual members of Gen Z, however, support remains unwavering.  Young men feel they can relate far better to the Chris Pratts of the world than they can to previous heroes such as John Wayne.

Already, Generation Z (defined as all those born between the mid 90s and mid 2000s) is breaking all the expectations.  They're more conservative than Millennials, but only on certain issues.  According to an AnchorFree study of 2000 young people born 1990-2009 commissioned by MyersBizNet, young people born post 1996 are progressively more likely to be conservative and less likely to be politically progressive.*  They're also less invested in television and more strongly bonded to their mobile devices. They celebrate diversity, but also believe that young people should earn their privileges through respect and hard work.  Entrenched in all this is an evolving view of masculinity, described in The Future of Men: Masculinity in the Twenty-First Century, shaped by a combination of television, film, social media and politics.

Definitions of masculinity vary significantly from one generation to the next, "but what is perhaps most notable about our generation," comments Stephanie G, a journalist in her young twenties, "is our reluctance or even inability to be defined in the first place.  This is both promising and alarming; men aren't stymied by narrow definitions of the past, but they increasingly feel lost.  In a notable TED talk, Jack Myers mentions how, when referencing the future of men, young guys respond, "You mean, we have a future?"  Gen Z struggles to define masculinity, but we are well-aware of how it's defined by other generations."

In a recent study conducted by AXE Canada, men between the ages of 15 and 25 admitted that they'd been presented an idealized image of masculinity as aggressive, although they often attributed this to their parents or other adults, and not to mass media.  Young respondents also admitted to largely rejecting stereotypical notions of masculinity, aiming instead for a more inclusive take on being a "real" man.

As in most generations, men of Gen Z admire assertive individuals who are desired by the opposite sex -- but they're also less likely to look down on displays of emotion.  This evolving take on manhood is arguably shaped by both mass and social media, where young men witness a wide range of characters.  Several of today's most popular male figures are shaped not by their aggressive, stereotypical take on masculinity, but on other factors altogether: their empathy, kindness and intelligence.  There's still a place for "traditional" masculinity, but it's just one of several options.

The Importance of Relatable Characters

The media has played a huge role in shaping young men for every generation of the 20th and 21st centuries.  The Baby Boomers had Paul Newman; Gen X had Kurt Cobain.  Over time, the ideal male lead has shifted somewhat from a handsome, debonair, and untouchable hero to something more relatable, albeit still remarkable in his own way.

Today's male heroes may be talented, but they're also deeply flawed.  These flaws make it easier for our generation to relate.  For example, although Stranger Things is based in the '80s, younger viewers feel one with the dorky male leads who despite often appearing less than confident are capable of great things.  Likewise, the male protagonist in 13 Reasons Why is a kind-hearted young man, but also assertive at times.  He is therefore subject of great admiration among both male and female viewers.

A popular series among Gen Z and Millennial viewers alike,The Big Bang Theory offers an interesting examination of manhood.  The characters are unabashedly dorky, and yet, the ones we idealize most (Sheldon) are confident in themselves and their abilities -- a trait we've long identified as manly.  Ultimately, despite their bookish appearances, The Big Bang's stars get the girl in the end.  As far as Hollywood is concerned, what could be more manly than that?

Adventure Time brings the balance between bravery and sensitivity to a whole new level.  Finn the Human is often aggressive and impulsive -- stereotypically male characteristics -- but he can also be surprisingly emotional at times.  He flies in the face of conventional animated males (such as Homer Simpson or Peter Griffin) of the last few decades, who are more frequently portrayed as buffoons -- definitely not figures to admire.

Sometimes, it's not just about a mix of attributes in a single character; it's about several figures showing their own unique take on masculinity. Perhaps this is why the men of our generation join Millennials in their Game of Thrones obsession; from Ramsay Bolton to Gendry or even Bran Stark, they love seeing how different young men act.  All of the show's men have wildly different motivations and ways of accomplishing their goals, but together, they demonstrate that there is no absolute right or wrong way to be a man, even in this fictional medieval world.

In TV, movies and books with male characters it's all about the story arc.  "We want to see people who are actively working to better their situation," comments Stephanie G.  "They could use Petyr Baelish's 'chaos is a ladder' approach or fight more honorably (and conventionally) as with the gang of boys in Stranger Things, but either way we see them actively striving towards a goal.  Our attention spans are notoriously short, so we're not willing to watch characters remain stagnant.  Hence, like Millennials, Gen Z is more into ten-episode Netflix dramas than sitcoms.  When we do embrace comedies, it's because the characters are multi-faceted or they in some way show growth throughout the course of the series."

For Gen Z, growth as a man means becoming more assertive, but also more empathetic.  There is no final word on what it means to be masculine. Definitions of masculinity are diverse and constantly evolving based on what they see on social media, Netflix, in politics and in their everyday lives. They're ready to dispel the notion that "traditional" masculinity is all bad, but they're not fully committed to the Greatest Generation's old school definition of manhood.  For Gen Z, it's all about the middle ground: assertive, yet sensitive.  If the media doesn't present them with realistic figures who conform to this view, they'll forge them on their own through social media.  They're ready to carve their own path, and they can't wait to show the world an evolved version of masculinity.

Next in our Gen Z series:  Gen Z Men: Strong in Movies, Cool on Instagram, Goofy on Snapchat.

Research and support was provided by Stephanie G, a Gen Z copywriter, dance team coach and event marketer.  Stephanie G is passionate about Gen Z and confident that, if young adults support and encourage one another, there is no limit to what we can accomplish.