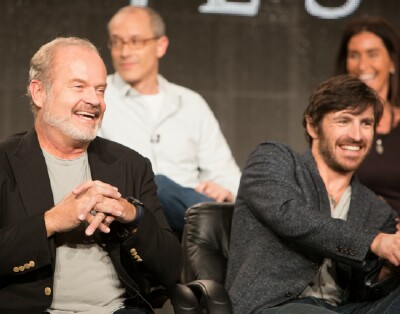 Pasadena, CA – The twice-yearly Television Critics Association tours are not popularity contests, but it has to be said that some networks try harder than others to make their presentations stand out from a very long and crowded schedule.

As a 25-year veteran of TCA the disparity in presentations has always been interesting to me. Some networks show up to present shows and stars in a relatively straightforward manner, with their talent taking the stage for a basic press conference, taking a few follow up questions in scrums and then dashing away. Others choose to only take advantage of this massive promotional opportunity once a year rather than twice (even though television has in every way become a year-round business). Curiously, some don't show up at all, effectively keeping their shows and talent below the media radar.

Others take impressive initiative and unfailingly make these TCA tours their own. Currently, the networks that make the most effort in that regard include Hallmark Channel, which has eliminated standard TCA press conferences with its talent in favor of massive evening parties at both annual tours (this time at the Tournament of Roses House in Pasadena) that have become Hollywood style events complete with red carpet arrivals and lavish dinners, during which more than two dozen stars (including TV personalities of yesteryear and current up and comers) dine with critics and reporters; BBC America, which rarely lets a tour go by without an afternoon tea, luncheon or deluxe evening party at which TCA members can get to know its talent; and newcomer Pop (formerly TVGN), which for the second consecutive tour has produced an elaborate lunch with its executives and the personalities on its shows. (This is particularly important because many reporters in the TCA have yet to familiarize themselves with the programs Pop offers.) The A&E Networks also have a handle on what TCA can be: During this tour Lifetime offered a special breakfast promoting its upcoming movie "Whitney" (about the combustible relationship between the late Whitney Houston and her husband Bobby Brown) and History is hosting an evening party with the cast of its drama series "Vikings."

Events of this kind serve to cut through the TCA clutter and establish and/or maintain connections between these networks and the press that are increasingly difficult to foster in the overloaded media environment of the day.

And then there is National Geographic Channel and its sibling NatGeoWILD. Without fail, these networks make certain that TCA tour attendees get to know their executives and the talent from their shows. These are series and specials that might not get the attention they deserve if the Nat Geo networks didn't do so effective a job of positioning and promoting them for the press, throughout the year and especially during TCA tours.

The opening night National Geographic welcoming party is now an official TCA tradition (one that nobody at TCA wants to see go away). It is especially welcome because it takes place at the end of what is typically the travel day for tour attendees (the days before the Winter and Summer tours officially begin) when everyone is happy to simply stay at the hotel after their long journeys. Nat Geo loads the party with executives and talent who are happy to do interviews or simply engage in informal conversations. This party primes the press for the official Nat Geo sessions that take place the following day and generates a level of interest that might not have already existed, at least for new shows featuring unknown individuals.

Among the NGC and NatGeoWILD programs that were promoted Tuesday night at the welcoming party and throughout the networks' almost three-hour block of press conferences on Wednesday (which was followed by yet another party, albeit a briefer one) were "Star Talk," the upcoming late-night NGC talk show based on the podcast by astrophysicist Neil deGrasse Tyson (the network's first-ever late night series) and "The Big Picture with Kal Penn," which aims to make Big Data understandable to the average person and look beyond it to the way ideas and information impact our lives.

Also, "American Genius," a series about the work of uncommonly smart people (the panel included Bill Nye the Science Guy and Apple co-founder Steve Wozniak); the upcoming movie "Killing Jesus" (based on the book by Bill O'Reilly, who never attends TCA sessions promoting productions based on his best-sellers, and which stars Kelsey Grammer and Stephen Moyer) and "Barkfest," a weekend of dog related programming coming in May.

The "Barkfest" panel included a dog that understands sign language, making him the most impressive "guest" to date at this TCA tour.