How Nine Minutes and 29 Seconds Changed the Following 365 Days 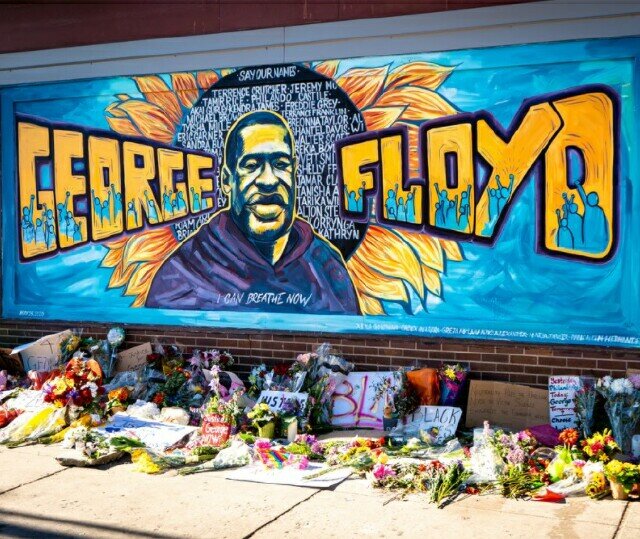 One year ago today, George Floyd, a Black man, was murdered by Derek Chauvin, a white now ex-police officer with the Minneapolis Police Department. After being suspected of using a counterfeit $20 bill, Chauvin handcuffed Floyd and then knelt on his neck for nine minutes and 29 seconds, killing him (as cameras took it all in). Chauvin has since been found guilty on all three charges posed against him, which included second-degree murder, third-degree murder, and second-degree manslaughter -- a step in the right direction, sure, but hardly a true victory. It took so long to get to this point, and so much is still happening, that the real question is … if real change is actually happening, what does it look like?

Beyond posts about COVID-19 and the informational updates supplemented by the CDC, most social media platforms have since been inundated with updates about the world-shaking murder and the events that have followed. Now, when I say "world-shaking" I don't mean that things instantly changed everywhere -- because they definitely did not -- but instead, that everyone had eyes on this terrible event. There was no doubt in anyone's mind that this was anything short of murder and, even if there was, the true horror of the event playing out couldn't be ignored, regardless of one's outlook on the politics of the subject.

Personally, I've never really felt safe around the police. Admittedly, the majority of any encounters I've had have been relatively uneventful, but the fact that I was mostly lucky hasn't eluded me. Over the course of the last year I've struggled to reconcile the part of me that wants to believe that most police would actually help when required, and the part of me that knows that every interaction with law enforcement could mean the unceremonious end of my life. In the face of a legal system that has, time and time again, proven that it not only doesn't support people of color, but also more often than not actively works against them, it feels great to see a bad cop get convicted in public, as he should. That said, I personally haven't seen anything that's made me feel any safer than I did before, and I'm not always sure what -- if anything -- it would take for that to change.

The problem is the process. Yes, obviously there were many things that could have been done to prevent Floyd's death, but once the egregious crime had been committed it was the train of events leading up to Chauvin's eventually conviction that I would take issue with. The amount of protesting that was necessary, the amount of media attention required, the slander against Floyd's character -- they were all things that shouldn't have had to be things, with the latter being a shameless attempt to pass the buck. Accountability has been the missing factor of the equation this entire time, and until I feel that something other than pretty much nothing would happen in the face of my untimely death at the hands of the police, it's going to be hard for me to see them as anything other than people who could murder me on camera and get away with it.

Celebrities, besides reveling in the case's eventual verdict, also shared their discontent with the tragic situation prior to the close of the Chauvin case. Comedy legend Dave Chappelle shared similar thoughts to mine about the despicable slander being spewed by certain public figures during his 2020 Netflix comedy special titled 8:46. (That was the original amount of time Chauvin was thought to have knelt on Floyd's neck before authorities made a correction. It now stands at 9 minutes and 29 seconds.)

"I see Candace Owens trying to convince white America, 'Don't worry about it, he's a criminal anyway,'" Chappelle says. He then adds, "He's a drug addict, and he's not a hero, why did the Black community make him a hero? Why do we choose him as a hero? We didn't! You did! They killed him and that wasn't right so he's the guy. We're not desperate for heroes in the Black community. Any n***a that survives this nightmare is my goddamn hero."

Normally, I spend my time postulating on various TV-related topics, and for good reason, because that's kind of my comfort zone. However, all the television landscape really is at its core is a reflection of us, the public. We watch what agrees with us, support what we love with our money, and, if we're lucky, write stories that reflect our respective lives and cultures while also making us feel represented. But occasionally it becomes necessary to stop looking to the reflection of the people, and just look at the people themselves.

What I see, when I take that look, is a nation currently in flux -- a society in the midst of change, if you will -- and while our collective journey for growth and equality as a people seems to have definitely brought us measurably closer to that end goal, I feel it's important to keep our eyes on the prize, as they say.

What I see, when I take that aforementioned look at us all, is a nation currently in flux -- a society in the midst of change, if you will -- and while our collective journey for growth and equality as a people seems to have definitely brought us measurably closer to that end goal, I feel it's important to keep our eyes on the prize, as they say. That doesn't just mean convicting murderers when they're guilty, it means changing the circumstances under which these conditions were able to thrive in the first place. Police are trained to do specific things, not everything, and the definition of what an emergency responder is needs to expand to include more suitable roles for the various situations that don't necessitate deadly force. Punishment for the offenders who do anything other than protect and serve their community needs to be normal, not something that's considered a victory because it rarely ever happens.

Something is happening, but it needs to keep happening if I'm ever to live in a world where I actually feel safe.