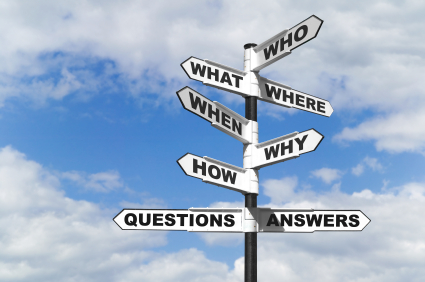 Online technologies are creating a seismic shift in ad effectiveness research and spurring it towards an inferential approach. A long-standing public example of the inferential approach has been Harvard’s IATs -- Implicit Association Tests (implicit.harvard.edu). You can see this indirect technique in action about you, personally, by taking one of the tests. An IAT can reveal your real, inner feelings about any topic from race or mental health to pets in the home. It does this not from your actual responses, but by interrogating to the millisecond speed of your replies on your computer. An IAT can potentially lay bare previously unknown insights about you.

Online technologies are creating a seismic shift in ad effectiveness research and spurring it towards an inferential approach.

A long-standing public example of the inferential approach has been Harvard’s IATs -- Implicit Association Tests (implicit.harvard.edu). You can see this indirect technique in action about you, personally, by taking one of the tests. An IAT can reveal your real, inner feelings about any topic from race or mental health to pets in the home. It does this not from your actual responses, but by interrogating to the millisecond speed of your replies on your computer. An IAT can potentially lay bare previously unknown insights about you.

Time-pressed consumers have become increasingly exasperated by fringe marketing tactics, from spam to unwanted online video ads automatically playing to “ sugging.” Sugging refers to “selling under the guise of” and it occurs when less scrupulous marketers pretend to be conducting a survey, when in fact they are simply trying to sell the product in question. In short, consumers have become wary of the unsolicited solicitor. 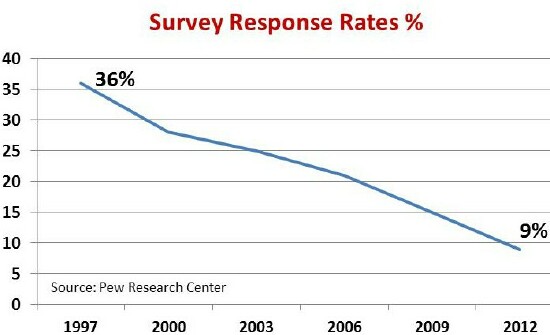 In response to consumers’ declining enthusiasm to answer marketers’ questionnaires, Google Consumer Surveys have shown that one or two survey questions not only can offer a substantial lift in response rates of 18% - 23%+, they can also be validated to be more accurate than conventional internet panels for consumer benchmarks such as incidence of technology, e.g. satellite dish ownership, or public health levels, e.g. daily cigarette smoking. They do this by applying the targeting principles of digital behavioral buyingand retargeting to probe a respondent’s IP address and cookies.

As a general principle, this approach could help reveal much of a consumer’s demographic and related behavioral activities, such as interests, hobbies and purchase intent.

In practice, Google has expanded their short-form surveys to be able to include up to 10 questions via their online technology. If more than 10 questions are required, a separate questionnaire is issued with similar screening questions on product usage, etc., which along with demographic post-survey stratification ensure data compatibility.

UM’s Audience Measurement Platform (AMP) also harnesses an inferential approach. AMP implicitly tracks when respondents have been exposed to a TV ad or visited a web site. AMP doesn’t have to ask panelists if they have seen the ad, and as a consequence it avoids the typical issue of respondent misattribution about exactly which ads they have seen and their subsequent digital behaviors. As a result, AMP questionnaires can comprise just three or four questions to provide cross-platform ad exposures and their effectiveness for both TV and online.

Not so long ago was a near-idyllic time for researchers. If a researcher could succinctly pinpoint in her post-campaign analysis why a campaign did -- or did not -- work, she could be lionized for her wisdom and perceptiveness. That era’s shelf life has well and truly expired. Today, that researcher additionally needs to demonstrate that the research investment has actually helped the campaign achieve its goals, not just why it may have succeeded or otherwise.

In response to this need, the last four years have seen the rise of real-time online optimization techniques which track consumer attitudinal responses, for instance awareness and purchase intent. They were pioneered for online activity, but are starting to apply across other media. Not only can we see which sites work best but also which creative messages. This goes beyond proxies such as click optimization to provide specific diagnostic creative messaging optimization.

Applying this approach to a product such as Google’s Brand Lift for YouTube, for example, creative messaging elements can be optimized such as determining the optimum ad time-length and if the brand’s logo should appear earlier in the ad. For creative agencies circumspect of ad messaging pre-tests, in-market online optimization provides a fast-track, real-world alternative.

Creative messaging optimizations know precisely which element of the decision process they are affecting. One of the online leaders in this area has been Insight Express with its campaign insights dashboard, but the new kid on the block is Extreme Reach. Extreme Reach offers short-form online surveys, sometimes just one question, as part of their online video ad serving. Extreme Reach has an active growing panel of 1.8+ million where it knows the exact composition of its panel. By serving the ad in parallel with the survey, and providing sufficient ad weight is achieved, it can track ad effectiveness in near real time.

Rapid online weekly tracking can also impact TV campaigns. Online trackers, measuring TV’s impact on the whole decision process up to the near-purchase of the product, can release their finalized, weekly data on the next working day. By passively tracking the exposure on a weekly basis and relating it to the consumer response, we can impute the relative rate of consumer reactions and the possible lag in that response.

In one example earlier this year, the UM research team actively monitored a low-weight TV campaign using a weekly online tracker. Two-thirds of the way through our weekly tracking we were able to determine the campaign was not meeting its communication KPIs. We alerted the media investment team and the client and recommended rearranging both the remaining weeks of activity and the weekly weights. Through the research team’s proactive weekly management, the impact per GRP for an acid-test metric such as the brand being a prospect’s First Choice improved by +17%: 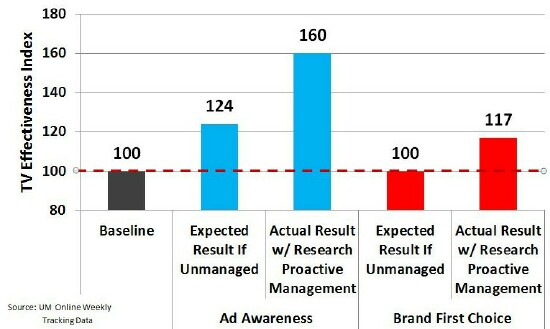 Innovations in online technology have propelled inferential research approaches to exciting new heights. Not only are these technology innovations typically cheaper and swifter, they are helping overcome the issue of crumbling survey response rates, they can directly quantify improvements in creative messaging and they enable proactive campaign management with real and measurable improvements. These and upcoming innovations may yet make it front and center of the industry’s overall research approach.

Graeme Hutton is SVP, Group Partner, Research at UM. Graeme came from the UK to the US in the

late 90s, and his only regret is that he did not do it sooner! Graeme joined UM in 2006. At UM, he has engineered and activated a broad-based set of integrated communications and consumer insight tools which dovetail into the agency’s burgeoning arsenal of media research products and systems. Graeme can be reached at Graeme.hutton@umww.com