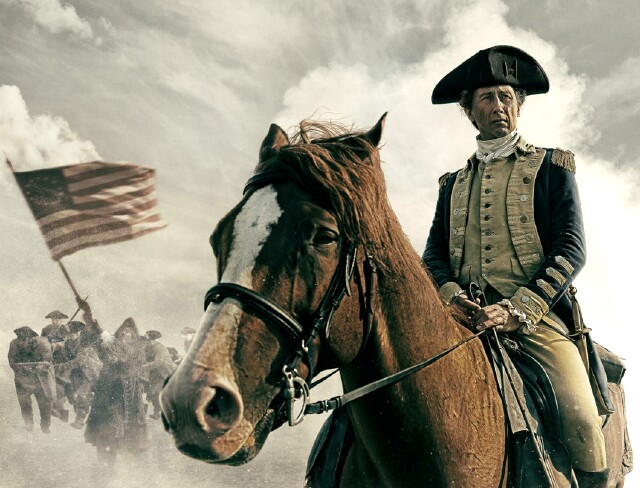 Being that history was one of the classes I cut the most back in high school, I can’t say that I often find myself planted on the couch in front of documentaries (or docudramas) about presidents (or any other historical figures, for that matter).  As a person of color, I personally tend to think of the American Revolution (and pretty much all of American history) as a bunch of white people fighting for their own rights and independence while simultaneously building their entire economy on the backs of slaves.  Then I happened to watch HISTORY’s three-part docudrama Washington, and you know what?  I was right!  Also, it was time very well spent.

Naturally, I wasn’t surprised at how correct I was, but I was surprised at how much I learned, and how much clearer a picture of a critical time in American history I had after watching.  Created by seasoned documentarian/writer/producer Matthew Ginsburg, starring Nicholas Rowe as the first President of these United States, and narrated by Jeff Daniels, Washington paints a nuanced picture of a complicated man, and while the history itself is full of conflict, drama and a fair amount of hypocrisy, what good story isn’t?

For me, the only real question is one born of present-day skepticism about, well, everything: How valid are the details that make up the story, which features many dramatic recreations of actual events?  Is everything accurate?  Fortunately, my apprehension was immediately put to rest by the credentials of the people telling ol’ G-Dub’s story throughout.  Besides Daniels’ narration and the dialogue in the written scenes that are interspersed throughout the three episodes, there are also constant asides and commentaries from people who must know what they’re talking about.  These are people like Annette Gordon-Reed, Joanne B. Freeman, Erica Armstrong Dunbar, Colin G. Callaway, Daina Ramey Barry and H.W. Brands of Harvard, Yale, Rutgers, Dartmouth, the University of Texas at Austin, etc.

Honestly, there are enough other historians, G.W. biographers and American public figures here (like General Colin Powell and President Bill Clinton) that all together they could play 5-on-5 basketball with each other and still have people on the bench.  My point?  The one thing this series isn’t is under-researched.

Factual as it all may be, this is still a largely scripted project, which means it should also entertainn, and in that sense there is a specific story being well told.  Let's give it a thesis: “This ain’t your daddy’s one-dimensional, wooden-teeth wearing, cherry tree-chopping George Washington.  Also, our battle scenes are dope.  Slaves were there, too.”

Okay, that may be less a thesis than a gross simplification of the series, but I stand by it.  Rowe’s performance is solid, but much of his character comes from the expert commentaries that illuminate Washington’s life while also crushing popular misconceptions about him.

Forgetting about the show for just a second, as far as George the man goes, it seems like he was a guy who kept kind of failing up.  He wanted the fame and glory that came from a great military career, but he didn’t really have one.  He covered his screw-ups, married rich and was disgusted by the notion of not being given the same rights and independence as his British counterparts.  They were all equal men, of course.  Just ask his No. 1 slave, William “Billy” Lee.  I mean, what’s freedom without another grown man to set out your pants and comb your hair every morning?

Again, the truly rewarding aspect of this whole thing is knowing that Washington at the very least feels like the truest account of what really happened during the eponymous character’s life, and how pivotal his very existence was to the American Revolution.  All of that said, my opinion of George Washington -- which barely existed before this show -- is now fully formed, and all of this is thanks to a limited series I would have never gravitated towards were it not my job to do so, either because of negative past experiences I’ve had watching documentary series that were straight-up snooze fests, or because of my own disinterest in learning about the “heroes” that founded “our” country and then didn’t abolish slavery for a hundred years.  Washington got me around all of that.

Either way, it’s 2020 now, and my days of practicing willful ignorance are behind me.  Watching Washington is the exact opposite of keeping myself in the dark, and I’ll take it, because lord knows I’m not going back to my high school history class any time soon.  I wonder what my kids are going to learn when they get there.  Hopefully HISTORY will help them along.