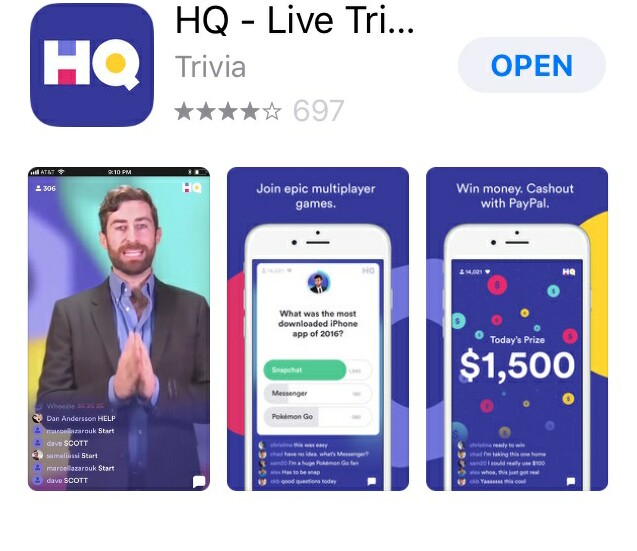 The most amazing new show of the fall season isn’t on a television network or streaming service.  It's on an app (or should I say it is an app?) and is the most exciting program of its kind since Who Wants to Be a Millionaire, a game-changer at the time of its premiere on ABC in August, 1999.  HQ, as this little gem is known, is the brainchild of Vine creators Rus Yusupov and Colin Kroll (download it here).  Unfortunately the current version only works on iPhones, but it should be available on Android any time now.

HQ is a rapid-fire trivia show that is presented live on the app twice daily at 3 p.m. ET and 9 p.m. ET.  It has a host (the hugely energetic Scott 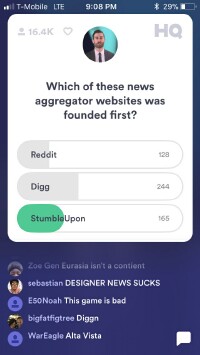 Rogowsky, pictured top left) and actual cash rewards for those who make it through the 12 multiple-choice questions that come flying fast and furious onto one’s screen during each telecast.  I’m referring to the presentations of this show as telecasts, because I see this as yet another extension of television – one that will likely have sponsors flocking to it and competitors developing shows similar to it once it spreads like wildfire, or goes viral if you prefer, which it will most likely do.  I can’t imagine why it wouldn’t.

I was introduced to HQ earlier this week by a dinner companion in Atlanta.  Download the app, he told everyone at the table with great urgency.  That was around 8:30 p.m.  Shortly thereafter, those of us who had followed his orders received on-screen notifications that the Sunday night edition was about to begin.  (Those notifications come in twice a day, disrupting whatever is going on and reminding interested parties that the game is about to begin.)

What followed was the most enjoyable few minutes of the evening.  Everyone at the table played as one collective contestant opposite more than 30,000 other players.  The game wasn’t half over when all but a few hundred remained, including all of us at the table, participating as a single hive.  Alas, we were bounced before the end.

One thing that makes HQ so exciting to play is that it seems to be Google-proof.  Each question appears, along with three possible answers, but players have only about ten seconds to touch the answer they believe to be 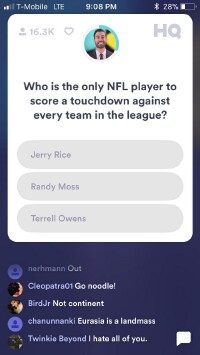 correct.  If they don’t move fast enough, they are bounced.  The same thing happens if they touch the wrong answer.  There simply isn’t enough time to Google in search of the correct answers (and that wouldn't be fun, anyway).  Players either know them or they don’t.  Or they are good guessers.  HQ keeps everyone honest.

Even when bounced, players can continue to watch to see who wins.  It’s usually just a handful of people. Throughout, the players names and, should they choose, comments fly up from the bottom of the screen in blink-and-you'll-miss-them fashion.  I wish the comments moved slower and were easier to read, as some of them are quite clever and provide a secondary level of entertainment on their own.

I’m not into mobile gaming, so I can’t say with any real assurance that HQ is wholly unlike anything else out there.  But the young and phone-obsessed people of my acquaintance seem to think it’s pretty special.  And during my stay in Atlanta, when we played the game a second night in another restaurant, people around us took notice, including the waiters, and downloaded the app themselves.  That’s anecdotal, but the responses certainly felt authentic.  I know I’m hooked, at least for now.

I also feel that HQ is the start of something big.  A real-time game show custom made for a quick hit of stimulating entertainment that can be enjoyed alone or with others, and always with thousands of other players, wherever they may be.  It will be a hit at parties, in bars and even at corporate events.  It will likely also be huge in offices; in fact, I think it will be better than a cup of coffee or a candy bar as a mid-afternoon picker-upper.  I imagine it is going to interfere with a few classes or after-school activities, as well.

And so it is that anyone reading this will now start to notice people suddenly focusing on their phones around 3 p.m. ET and 9 p.m. ET, tapping them once a minute or so, and then displaying a reaction of some kind – if they aren’t too busy playing the game themselves.