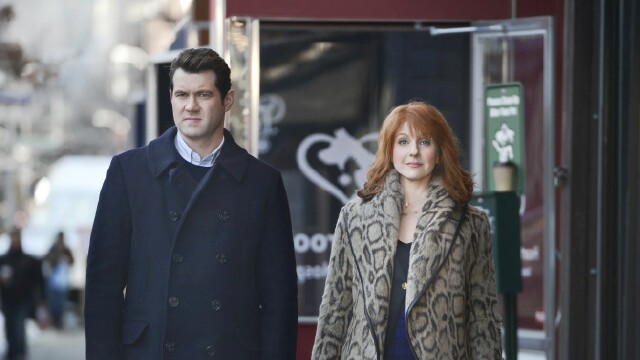 Satisfyingly shameless.  Remorselessly ridiculous.  Delightfully discourteous.  This is how I would describe Hulu’s Difficult People.  Creator and executive producer Julie Klausner’s brand of brash observational comedy is fresh, self-aware and expertly executed.  The proverbial cherry on top is her kismet partnership with Billy on the Street’s Billy Eichner, with whom she also partnered on the aforementioned program, where she serves as both head writer and executive producer.  As evidenced by the fruits of their collaborative labors, Klausner and Eichner create material that not only points a crass finger at the very business they’re in, but also gracefully walks the fine line between being cleverly satirical and blatantly offensive. With the third season of Difficult People having recently premiered, this devilish duo seems to have done what many showrunners fail to do by this point: outdo themselves altogether.

Difficult People is about two self-obsessed aspiring comics in their thirties who are equally jaded and share a mutual disdain for pretty much anything pop-culture related.  Like most of the people they interact with, they have no filter (and no shame) when it comes to vocalizing their roast-worthy opinions about a long list of topics that includes everything from vapid stardom and the entertainment industry to gay culture in America and deplorable politicians.

Whenever these fictional best friends aren’t selling out the few values they do have during whatever dishonorable and hair-brained scheme they have initiated to further their career(s) that day, they’re spending almost all of their time tearing into celebrities they deem shallow or hypocritical.  This in itself is an ironic theme that threads the whole series together.  The whole point of the show is that the onscreen Julie and Billy are bad people who regularly exhibit many of the traits they criticize.  Their saving graces come down to two main things: 1) They are so hilariously jaded and cynical that they can’t help but constantly ignore their own day-to-day hypocrisy and narcissism, and 2) more often than not, these two anti-heroes are actually making really good points that are born from surprisingly spot-on observations, even if their delivery is vulgar and unsavory.

The supporting cast helps make the series more than just “The Billy and Julie Show.” James Urbaniak plays Julie’s boyfriend Arthur, and together they are living proof that opposites attract.  He is the empathetic straight man to Julie’s self-obsessed wackiness.  Andrea Martin is amazing as Julie’s judgmental and self-centered therapist mother.  The characters at the New York City restaurant where Billy works are played by Gabourey Sidibe, Shakina Nayfack, Derrick Baskin and Cole Escola.  Every one of these gifted actors is an integral part of the formula that makes this fearless comedy what it is, but I have to shine a specific light on Escola and his character Matthew.  He is so ridiculously over-the-top that one can’t help but admire Escola’s dedication to his performance and how he just leaves it all out there every time he hits the screen.

As far as the recently released third season goes, Difficult People has seriously stepped up its game writing-wise.  The show isn’t just maintaining the pace it established in the previous two seasons -- it is surpassing it.  In the third episode, for example, there is a hilarious interaction between Vanessa Williams and Cole Escola that I won’t spoil (let’s just say it involves a camera and lots of food), but I will give it major props for being an unexpected knee-slapper.  It’s such a spectacularly funny WTF moment that it makes me wonder what else is in store in the weeks to come if such feature film-worthy content was used this early in the season.

Really, it all goes back to a quote that Billy’s onscreen persona says:  “When did comedies become 30-minute dramas?”  In the context of the show it’s kind of a throwaway line, but in reality it’s a pretty profound question that explains the entire ethos of Difficult People.  The characters grow, but not so much that the terrible folks they are at their cores ever fundamentally change.  It’s a fact: We like them because they are so awful.  And we love Difficult People because it never forgets what it truly is at the end of the day: an unapologetic comedy.